Last year, on July 25th in New Orleans, the Louisiana Democratic Party hosted its annual Jefferson-Jackson Dinner, the big yearly fundraiser and pep rally showcasing the state party’s leaders and agenda. There was a tribute to the outgoing U.S. Sen. Mary Landrieu, speeches by U.S. Rep. Cedric Richmond and State Sen. and Party Chairwoman Karen Carter-Peterson, and a keynote address by U.S. Sen. Amy Klobuchar. There was also a speech by a state representative from Amite, Louisiana who was campaigning for governor, a bid that many in the room thought to be improbable and unlikely, even if they liked him personally and agreed with everything he said.

But the real star- and the real surprise- of last year’s event was someone who had only become a member of the Democratic Party a few months prior. Gov. Martin O’Malley and Sec. Hillary Clinton had recorded video messages for the event, both expressing regret that they couldn’t be there and both asking for the support of Louisiana voters in their bids to capture the party’s nomination for President of the United States. Bernie Sanders, however, showed up in person.

He delivered a speech that most political observers could now recite by memory: lambasting income inequality and Wall Street, championing free college education and universal healthcare, and decrying the influence of big money in politics. I met him and his wife Jane shortly after he wrapped up his remarks and managed to thank both of them for thinking of Louisiana. After all, we haven’t been on the map for Democratic candidates since 1996. (I’d been sitting next to his campaign staff member during the dinner, who graciously provided me easy access). 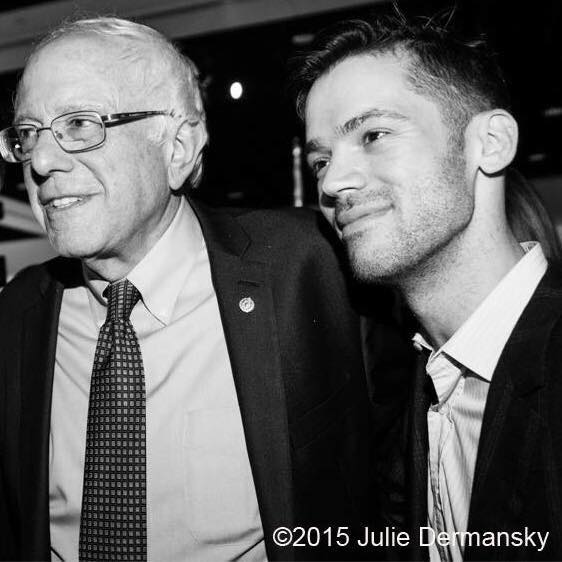 The next day, Sen. Sanders spent an hour with about sixty Louisiana Democrats at the home of my friend Gilda Werner Reed. It wasn’t a fundraiser, though. He was there to listen to our concerns and to hear our perspectives. He was thoughtful and Socratic and cognizant of the challenges he faced in convincing people in the Deep South to vote for him. After he left Gilda’s house, he drove down the street and addressed a rally of more than 4,500 supporters in Kenner, the biggest rally for a Democratic candidate for any office in Louisiana in over a decade.

I respect and admire Sen. Sanders, and I am grateful that he spent time here in Louisiana. I agree with much of his campaign’s platform, and I think he has done more to advance the progressive agenda than anyone else in this election. He has inspired millions of people, particularly millions of young people who believe in his vision for a more inclusive and more equitable future.

Hillary Clinton may not have been in New Orleans that weekend, but, throughout her life, she has been by Louisiana’s side more than any other national political leader, with the exception of her husband, who won the state in both 1992 and 1996. She was here in the eighties as First Lady of Arkansas and in the nineties as First Lady of the United States, championing healthcare and public education, meeting with people from all 64 parishes, cultivating lifelong friendships with people that both she and her husband inspired into action and advocacy. She was here in 2014, campaigning on behalf of her colleague Mary Landrieu. She was here this year, addressing a packed crowd at an inner-city school in Baton Rouge. A couple of months later, her husband was here as well, at a union hall.

In the Louisiana Democratic primary, Hillary Clinton won by nearly 50 points over Sen. Sanders. She received nearly 100,000 more votes than the winner of the Republican primary, Donald Trump. Her victory was not because of her name recognition; it was because people here know her. They’ve known her for decades.

Secretary Clinton is not perfect. But she’s also not the caricicature of corruption that her opponents like to imagine her to be. Without question, she is the most qualified person to seek the presidency since George H.W. Bush, who, prior to his election, was a former Congressman, former U.S. ambassador to China, former director of the Central Intelligence Agency, and the outgoing Vice President (who had previously beat his boss, Ronald Reagan, in the Iowa caucus of 1980). She is more qualified today than her husband was in 1992, more qualified than George W. Bush was in 2000, and more qualified than Barack Obama was in 2008.

I am a progressive, and I am a pragmatist. They’re not mutually exclusive. Secretary Clinton is the most experienced, most knowledgeable, most effective, and most accomplished person that has sought the Democratic nomination in over a century. She has experience in the Governor’s Mansion of Arkansas, in the White House, in the United States Senate, and as the leader of the State Department.

Her record is not flawless, to be sure, but no one’s is. Sen. Sanders voted for many, if not most, of the same legislation that his supporters now fault her, by proxy, of supporting  when her husband was in office. I trust that great leaders are capable of learning from their mistakes and from evidence. She regrets her vote to authorize force in Iraq, and even though her singular vote didn’t tilt the outcome, it has remained a thorn in her side. It’s why I supported Barack Obama over her in 2008.

The simple truth is this, though: Bernie Sanders cannot and will not win the nomination of the Democratic Party.

The math simply doesn’t add up.

He can, however, continue to needle the party into adopting more progressive policies. He can make an enormous difference, and I hope he does.

We need his voice.

None of this will matter if Donald Trump is elected President.

None of this will matter if progressive voters sit this election out or decide to cast a protest vote for a third-party candidate because they’re turned off by what they read about Secretary Clinton on Facebook or on some fly-by-night website.

Those are the stakes.

Let’s hand the Oval Office over to a woman who knows Louisiana, who knows America, who knows the world, and who knows what it takes to govern effectively.