On February 17, 2016, the British poet Brian Bilston, the “poet laureate of Twitter,” published a poem he titled “America is a Gun.” 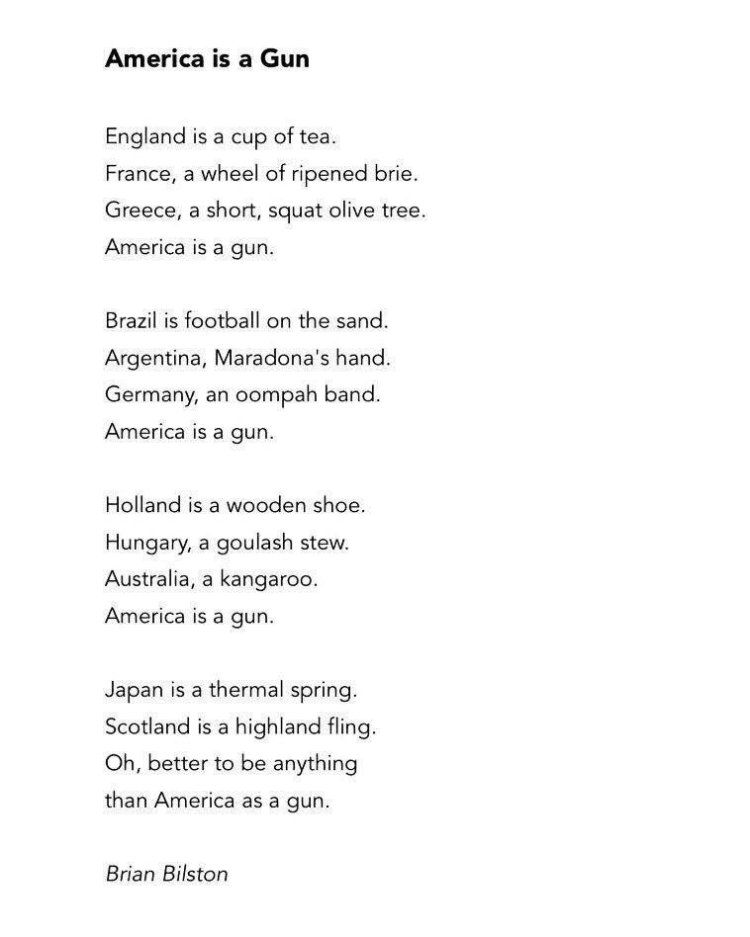 Three days later, in Kalamazoo, Michigan, an Uber driver named Jason Brian Dalton set out on a four and a half hour murderous rampage. He selected his victims randomly. A 25-year-old mother, Tiana Carruthers, was his first victim. He shot her four times with a semi-automatic Glock handgun, while she stood in the parking lot of her apartment complex, alongside her small daughter and several other young children. Carruthers, fortunately, survived.

A few hours later, Dalton drove to a nearby Kia dealership and murdered Richard E. Smith and his teenage son Tyler. Fifteen minutes later, he opened fire on five people who sat inside of their cars in the parking lot of a Cracker Barrel restaurant. Four died, all over the age of sixty. The fifth victim, a fourteen year old girl named Abigail, barely survived.

In every other industrialized country on the planet, this type of senseless mass murder would have shocked and traumatized the public. There would have been vigils in small towns and big cities. Dalton’s name would have been seared into the public’s memory and written into history books. Politicians would debate what could have been done to prevent such a tragedy.

Dalton later claimed that he believed he was being guided to commit these murders by the Uber app, which he thought was sending him messages from the devil. Later, police discovered that Dalton owned a total of seventeen different guns. In every other industrialized country on the planet, the public and the media would ask how someone could possibly collect such an arsenal.

In the United States, Dalton’s purchases were completely legal, of course. And in the United States, Jason Brian Dalton is not destined to be remembered in the history books. The national media had moved on from the massacre in Kalamazoo within hours. Americans didn’t hold vigils across the country. Politicians didn’t hold up these murders as an example of the urgent need for policy reform.

We are numb and desensitized to these mass murders, because here, in the United States, they happen regularly.

Americans don’t remember those massacres, even though they occurred only a few months ago. We don’t remember the names of the murderers or the victims. We never even bothered to learn their stories.

The media paid very little attention, focusing instead on Donald Trump’s every insulting word. After all, he makes for better television, and the mass murders in Arizona, Kansas, and Washington State weren’t exceptional enough to warrant wall-to-wall coverage: There weren’t enough victims. They weren’t committed by someone with a vaguely foreign-sounding name or someone who became perversely inspired by terrorists living a world away.

During Barack Obama’s tenure, mass shootings on campuses have claimed the lives of over two dozen elementary and high school children and at least fifty college students. Mass shootings have claimed at least twenty-six Americans who served on military bases, not in Iraq or Afghanistan but right here in the United States. A Congresswoman was nearly murdered in a mass shooting that claimed the lives of a federal judge and a nine-year-old girl, among others. Sixteen Americans have lost their lives in mass shootings at places of worship. Even more have been killed in their workplace.

On a staggering seventeen separate occasions, President Obama has had to address the nation in the aftermath of a mass shooting. Today, he spoke for the eighteenth time, addressing the country from the James Brady Press Room after the worst mass shooting in American history. More than 100 people were gunned down, fifty dead.

We will remember this tragedy, not only because of its scale but also because it was committed by a man who proclaimed himself to be serving on behalf of ISIS. The white supremacist who murdered eight students and one teacher at a college in Oregon last October didn’t represent an existential threat, nor did the Christian zealot who murdered three people- including a police officer and an Iraq War veteran- and injured nine others in an attack at a Planned Parenthood clinic in Colorado. Yet all of these shootings, including the one today in Orlando and the recent massacre in San Bernardino, California, have one thing in common: They were committed by American citizens.

We may blame a particular religion, particularly when it’s not our own. We may call these acts “terrorism,” particularly when they’re committed by people with names that don’t sound like ours. And the truth is: It’s all terrorism. We were terrorized in Kalamazoo, in Aurora, in Charleston, in Newtown, in San Bernardino, in Kansas and Washington and Oregon and Arizona, and in Orlando by American citizens, most of whom were able to legally purchase weapons of war.

The scourge of mass shootings in the United States has nothing to do with a clash of civilizations. They are a symptom of our own culture– our obsession with guns, the ways in which we champion vigilante justice and celebrate celebrity, even if it’s ephemeral.

Every time something like this happens, gun advocates argue that it could have been prevented if only more people were armed. If only elementary school teachers had been carrying guns, twenty small children wouldn’t have been killed by Adam Lanza in Newtown. If we allowed guns in movie theaters, James Holmes wouldn’t have killed twelve people and injured seventy others in Aurora. Guns in churches would have prevented Charleston, and guns in bars and nightclubs, presumably, would have prevented the massacre in Orlando.

The solution, according to these people, isn’t to make it more difficult for people to purchase guns; it’s to make it easier, to make guns even more ubiquitous, to empower anyone and everyone to own and carry weapons specifically designed to murder human beings anywhere and everywhere.

Omar Mateen was able to murder fifty of his fellow Americans in Orlando because we allow practically anyone to legally purchase high-powered weapons of war, even if they’re on the no-fly list, even if they’re known to be mentally unstable, even if they’ve been investigated twice by the FBI, even if they once associated with a member of al-Qaeda.

Mateen’s self-proclaimed (and likely imagined) allegiance to ISIS may make us feel less culpable as a society, despite the fact that he was born and raised in America.

But we need to ask: What makes someone like Mateen resort to radicalism and mass murder? Is it enough to simply blame “Islamic terrorism” when other Americans have committed similar atrocities in the name of Christianity or Satanism or white supremacy?

If we merely blame Islamic terrorism, then we diminish the epidemic of mass murders in America, murders committed by Americans against Americans.

We sidestep an essential truth, because it’s inconvenient. We are doing this to ourselves. We are our own worst enemies.