On Dec. 28, 2014, I hit “publish” on what would almost instantly become the most sensational and most popular report I’ve ever written. After more than a month of research, I uncovered evidence that House Majority Leader Steve Scalise, a Republican from Louisiana, had once attended a conference hosted by the European-American Unity and Rights Organization (or EURO), a white supremacist hate group founded by David Duke, a former grand wizard of the Ku Klux Klan.

Within hours, the story had been picked up by news outlets all across the globe. For a few brief days, it seemed as if every newspaper, online publication, and cable news network had assigned someone to cover the story. I fielded interviews requests from The Washington Post, The Huffington Post, Politico, and dozens of others. I spoke on-air with MSNBC and, later, on the radio with FOX. The Advocate of Baton Rouge published a front-page profile about me on New Year’s Day.

I had anticipated the story would get some traction, but I couldn’t have imagined the intense interest it ultimately generated.

Today, more than a year later, there is a development in that story, which should permanently disabuse any belief that Congressman Scalise had actually been speaking to an entirely different organization on the same day and at the same venue. The Majority Leader knew exactly with whom he was speaking. But after one notorious and well-known ally of David Duke clumsily attempted to come to Scalise’s rescue, some continue to believe that the congressman never attended the conference.

Yet, despite the fact that Scalise, less than 24 hours after my story first broke, admitted his attendance at the conference to Robert Costa and Ed O’Keefe of The Washington Post, there were more than a couple of reporters and bloggers determined to debunk it.

So, they turned to Kenny Knight, a former New Orleans police officer who became David Duke’s close friend, campaign manager, and key organizer of Duke’s hate group. Knight had also been a neighbor of Congressman Scalise, a fact he conveniently failed to disclose to reporters covering the story. Scalise, he claimed, hadn’t been invited to the hate group’s meeting; Knight said he had invited then-State Rep. Scalise to talk with the “Jefferson Heights Civic Association.” Knight double-booked the venue, he said. The Jefferson Heights Civic Association would meet in the morning; EURO, the white supremacist hate group, would take over in the afternoon.

“Did Steve Scalise admit to speaking at a white supremacist event he never attended?” asked Betsy Woodruff of Slate, relying entirely on the testimony of Knight and his former girlfriend. “I, simply as a courtesy to Mr. Duke, rented the room and set it up to give them a location,” Knight told Woodruff. “I wasn’t really involved with the actual conference itself.” If she had merely done a cursory search on Google prior to publishing her story, Ms. Woodruff would have discovered irrefutable photographic evidence that Kenny Knight was lying to her. Here he is in David Duke’s newsletter, pictured at the very event he claims to have not actually attended: 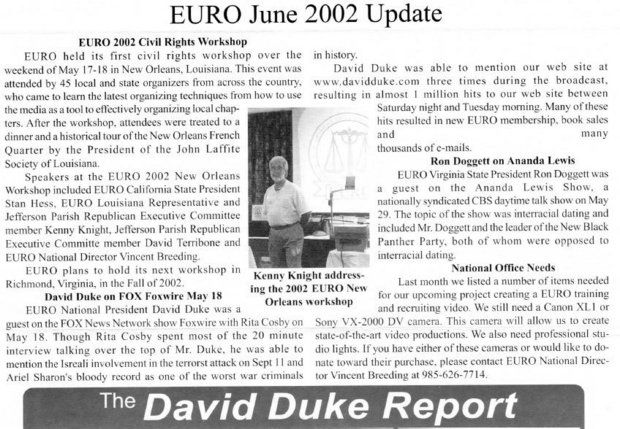 Ms. Woodruff and others, had they merely taken a few seconds to fact-check Kenny Knight, would have also discovered that the Jefferson Heights Civic Association never existed. It had no members. No one had ever even heard of it. Jefferson Heights was, in fact, the name of the street that both Knight and Scalise had once lived, but their neighborhood was already a part of a well-known civic association. If these reporters had done a little more digging, they would have figured out that the Landmark Best Western, the venue hosting Duke’s hate group, was located more than five miles away from Jefferson Heights, hardly the best place to host a neighborhood meeting.

The Times-Picayune also gave Kenny Knight the benefit of the doubt. “Reports that Rep. Steve Scalise, the third-ranking Republican in the U.S. House of Representatives, gave a speech to a white nationalist conference connected with David Duke in 2002 are not accurate, the man who organized the events said Wednesday (Dec. 31),” its story kicked off.

To be sure, there were some, like Jeff Adelson of The Advocate, who quickly recognized that Kenny Knight’s story was ridiculous.

However, Scott McKay, the publisher of The Hayride, a conservative blog that covers Louisiana politics, immediately and reflexively believed that Kenny Knight’s word was gospel. “Turns out Lamar White got even the most basic facts wrong about Scalise’s speech,” he sneered, “which is hardly shocking given his track record of false attacks and smears of people he disagrees with politically.” He told readers that my story was “falling apart,” and he demanded an apology from me. “Steve Scalise is owed an apology by Lamar White,” he wrote, “and Louisiana is owed much better political discourse than this individual has provided,” which is particularly rich from a man who had, only a few months prior, dismissed me as a “crippled” and a “campaign prop” after I spoke about disability rights at a press conference in Texas for my friend Wendy Davis, who was then running for governor.

I’ve never quite understood the nastiness or the impulse to believe Kenny Knight over the congressman himself. Scalise told The Advocate (bold mine), “One of the many groups that I spoke to regarding this critical legislation (of the Stelly Plan)  was a group whose views I wholeheartedly condemn. It was a mistake I regret, and I emphatically oppose the divisive racial and religious views groups like these hold.” (As an aside, according to the original reports of Scalise’s speech to this group, which informed the basis of my report, he had not been addressing his opposition to the Stelly Plan, a bill that had only been pre-filed at the time. A few months later, he did embark on a series of speaking engagements regarding Stelly, but an attendant at the EURO conference recalls that Scalise talked on other issues, mainly his efforts to rededicate a “slush fund” legislators had used to invest in community non-profits into a package of incentives designed to attract the relocation of the NBA’s Charlotte Hornets to New Orleans).

One question that continues to remain unanswered is whether Cameron Henry, now a top Republican in the state legislature, had accompanied Steve Scalise to this hate group meeting when he served as an aide to the then-State Rep. Scailse; Henry, thus far, has refused comment.

As a result of these sloppy reports and largely opinion-based pieces on blogs, I suddenly found myself the target of a host of menacing and defamatory hate mail, primarily from white supremacists online. It didn’t seem to matter that Congressman Scalise repeatedly acknowledged and confirmed his attendance, thereby validating my story. What mattered, I suppose, was what Kenny Knight had said. For some reason, it was easier for people like Mr. McKay to believe in Kenny Knight than in Steve Scalise’s own admission.

Yesterday, though, should have put an end to the notion that Kenny Knight is a rebuttable and honest businessman. As Jim Mustian of The Advocate reports:

A federal judge Thursday unsealed a 22-page criminal complaint that accuses Knight of conspiring with Dr. Barbara A. Bruce to dole out prescription painkillers to friends and patients without conducting the required medical exams.

Knight’s business, the Axcess Medical Clinic on Lake Forest Boulevard, took only cash and attracted addicts who traveled for hours to get to it, according to the DEA.

Staff members are accused of conducting sham therapy sessions and distributing pills to patients who would resell the narcotics in other cities like Houston.

At least three fatal overdoses have been “associated with Bruce,” according to federal court papers.

Knight is accused not only of sanctioning the scheme but also of pressuring Bruce to see more patients, a directive that apparently led to a falling out between them.

He kept close tabs on the clinic, communicated directly with patients, manipulated medical records and stored the clinic’s mainframe computer at his home, the DEA alleges.

I continue to stand by my story, and no, I will not be issuing an apology to anyone.But to those who ever even considered taking Kenny Knight’s word as fact, you may consider scheduling a routine examination with your doctor. It’s a painless and quick exam. It’s called a “gut check.”