I was born in the United States immediately after my parents arrived here from India. I was raised in a strong Hindu culture, attended weekly pujas, or ceremonial rites, and read the Vedic scriptures. Though my prayers were a child’s constant stream of requests and broken promises, Hinduism provided me with moral guidance and spiritual comfort. It never occurred to me that I should consider any other religion; to be a Hindu was a part of my Indian identity.

My dad and mom told my brother and me that we came to America to be Americans. Not Indian-Americans, simply Americans. If we wanted to be Indians, we would have stayed in India. It’s not that they are embarrassed to be from India, they love India. But they came to America because they were looking for greater opportunity and freedom. I do not believe in hyphenated Americans.

On October 21, 2007, shortly after a 36-year-old Bobby Jindal was elected governor of Louisiana, thousands of people took to the streets in celebration. They handed out candy. They danced. According to one report, it was as if they had “erupted in joy.” But this celebration didn’t happen in the streets of Bobby Jindal’s hometown of Baton Rouge or outside of his campaign headquarters in Metairie or his house in Kenner. It happened in Khanpura, a town of more than 3,500 people in northern India, less than 200 miles from the Pakistani border.

Even though he had only visited as a child, Khanpura considers itself to be Bobby Jindal’s “ancestral home,” and countless members of his extended family still live there. Residents had lined up at the doors of the homes of Jindal’s family members to congratulate them. “Now, that Bobby has registered an impressive win in the gubernatorial poll defeating his opponents, we want that he should find time and visit his ancestral village,” his cousin Gulshan Jindal said. “It will be a great occasion for all of us.” 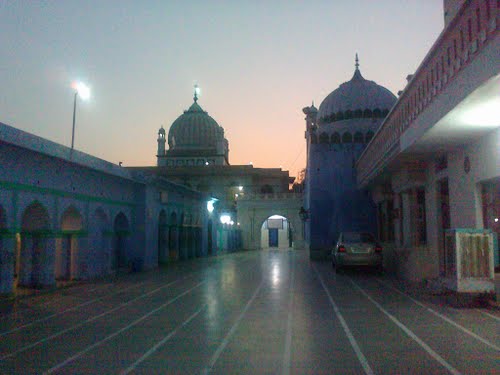 A year later, in a different American election, the residents of another small village on another continent celebrated similarly when a kid they’d once known as Barry became the first black man elected President of the United States. Like Jindal, the first Indian-American governor in history, President Obama’s cousins also begged him to visit his father’s hometown.

The joy of their extended family members is understandable. With their historic victories, both Bobby Jindal and Barack Obama proved that America really could be the land of opportunity, even for the son of a villager from rural Kenya or northern India. As I wrote last month, in an essay titled “Barry and Bobby,” the stories of these two men are, at the same time, astoundingly similar and diametrically different.

This week, in the aftermath of his erroneous and ridiculous suggestion that there are neighborhoods in industrialized Western European countries, including England and France, currently controlled by radical Muslims and essentially self-governed under Sharia law- so-called “no-go zones,” the world is finally getting to know the Bobby Jindal that many of us from Louisiana have known for far too many years.

He is a smart man with an undeniably impressive resume, but since his first and only electoral defeat in 2003, which many have attributed to racists in North Louisiana, Bobby Jindal has been willing to do or say almost anything in order to earn the favor of the radical religious right, the very people, it’s worth noting, who bullied and ridiculed him as a child.

“A childhood friend, a Southern Baptist intent on converting the world,” he wrote in 1993, “first introduced me to Christianity by telling me ‘you and your parents are going to hell.'”

According to those who knew him well during and shortly after his years in the administration of Gov. Mike Foster, something changed following his 2003 defeat. His sense of earnest optimism was replaced with hardened cynicism. He hired a new staff, partisan hacks who promised to help him win over the racists; he shut off relationships with many of his Democratic friends. When he ran again in 2007, he spent more time behind the pulpits of evangelical churches in Northern and Central Louisiana, delivering the same testimony about his conversion to Christianity, than he did talking about the business of governing. It was calculated: To win in Louisiana, he couldn’t be the brilliant, first-generation Indian-American who wrote 10,000 word white papers on public policy; he’d have to be known, first and foremost, as an evangelical Christian.

As a student at both Brown and Oxford, Bobby Jindal wrote extensively about his religious identity, and although he’s best known for publishing an essay about his participation in an exorcism, much of his work is insightful, contemplative, and genuine. He comes across as wholly and completely authentic. Back then, he was not trying to convert the world; he was merely trying to explain himself and to help others who, like him, were the children of immigrants and who also struggled to balance the traditions and customs of their parents with the forces of assimilation and acculturation.

At Brown, one of Jindal’s best friends was a Muslim, and Jindal recalled encouraging his friend to become a more observant participant of his faith. “I was overjoyed when Arshad joined me in silent prayer before every meal,” he writes. “I encouraged him to fast during Ramadan. Though every step deeper into the Muslim faith may have seemed like a step away from Christianity, Arshad was actually moving closer to God.”

On Saturday in Baton Rouge, Arshad’s friend Bobby will be hosting a prayer rally organized by a recognized hate group. Only a few years ago, a spokesperson and leader of this group suggested that the United States prohibit all Muslims from immigrating. Earlier this week, Arshad’s friend Bobby made a complete fool of himself when he perpetuated a hateful and dangerous lie that Muslims were invading and conquering entire neighborhoods. He was accused, rightfully, of being Islamophobic.

Yesterday, on Fox News, he warned that if America did not take proactive steps to curtail the immigration of certain Muslims, it too would be threatened.

Our entire culture is in jeopardy. “Islam has a problem,” he said and then accused its leaders of not condemning the very acts of terrorism that they have publicly condemned, over and over, for years and years.

There is no doubt that terrorists who cloak themselves in the guise of Islam pose a serious threat. But consider this: Baton Rouge, Louisiana- the hometown of Bobby Jindal- has a murder rate 20 times higher than London, the city in which he warned of “no-go zones.” Louisiana has more people locked up behind bars, per capita, than any other place in the entire world. Those are the facts. Louisiana is more violent and much more dangerous than anywhere in Western Europe.

This does not minimize or trivialize or diminish the problem of disaffected, disenfranchised angry radical Muslim zealots in other parts of the world. Three years ago, a deranged teenager dressed in a costume walked into a Colorado movie theater and killed 12 people. There was Newtown and Tucson. Almost every night, the streets of Louisiana are vulnerable.

Make no mistake: When Bobby Jindal travels abroad and, in front of an international audience, lies about the dangers posed by brown-skinned immigrants with funny names and a different religion, he is not making the world a safer place; he is merely pandering to paranoid and xenophobic charlatans who teach their children to tell their Muslim or Hindu classmates that they are “going to hell.” That is not a tolerant America. That is not the America Bobby Jindal’s own parents wanted for their children.

And assimilation is powerful and important, but assimilation in the United States should not require someone to change their name or their religion or to denounce their ethnic culture or heritage in order to be accepted. In framing his remarks, Jindal has repeatedly referred to his own experience. He has argued against “hyphenated” Americans, which is something I’ve heard white racists argue for my entire life when discussing the term “African-American.” His parents, he claims, came to America to become American, and in so doing, they relinquished their cultural and national identities as Indians.

But here is what Jindal wrote about his conversion to Christianity in 1993 (bold mine):

My parents went through different phases of anger and disappointment. They blamed themselves for being bad parents, blamed me for being a bad son and blamed evangelists for spreading dissension. There were heated discussions, many of them invoking family loyalty and national identity. My parents have never truly accepted my conversion and still see my faith as a negative that overshadows my accomplishments. They were hurt and felt I was rejecting them by accepting Christianity. I long for the day when my parents understand, respect, and possibly accept my faith. For now, I am satisfied they accept me.

I tend to believe the Bobby Jindal of 1993. There is a remarkable, stinging, brilliant vulnerability in his voice, a yearning for acceptance. It is likely something to which we can all relate.

Today, Bobby Jindal, the first Indian-American governor in history, doesn’t want to be known as Indian-American, and by now, his family in Khanpura knows not to ever expect a visit. He can no longer seem to recall his own real, personal struggles with reconciling family loyalty with “national identity.” That reconciliation is why so many of us celebrate our hyphenated identities.

Today, his primary allies are those who earn a fortune telling people how anyone who loves differently or worships differently than they do are going to hell. Today, he is forced to lie about the scourge of radical Muslim immigrants living in fictional neighborhoods, right in our midst, in order to lie with radical Christian bigots. This has become his base; this is who, he hopes, will usher him into the White House.

If he were, Louisiana would be in much better shape than it is right now, and Bobby Jindal would have a decent shot at becoming the first Indian-American President of the United States.