We had spent the last several hours inside of LSU’s Pete Maravich Assembly Center observing Gov. Bobby Jindal’s controversial prayer rally, four of us huddled behind a fold-out table reserved for members of the press. “It said, ‘Governor Bobby Jindal, State of Louisiana,’ and it had a fleur-de-lis in the middle.” Robin is a professional photographer, and when Gov. Jindal finally took the stage that afternoon, she made her way to the front and began snapping pictures.

His belt buckle that day was, indeed, impressive, even enviable, but that is not why it was notable, at least for those of us from Louisiana who have followed Bobby Jindal’s career. When I first met Gov. Jindal, years ago at an event in the Governor’s Mansion, he sported a navy blazer two sizes too big and a frumpy pair of khakis. That had always been his style. He was considered a wonk, the Rhodes Scholar wunderkind, and he dressed the part. When he was in Congress, cartoonists poked fun at his hairstyle, a nerdy butt-cut that had gone out of fashion well before his senior year at Baton Rouge High.

But when he stepped onto the stage on Saturday, it became clear that Jindal, in preparation for a likely run for the presidency, was the recent recipient of an extreme style makeover. Kenneth the Page could never pull off cowboy boots, a pair of tight-fitting blue jeans, and a gold belt buckle that would make the guys from “Duck Dynasty” jealous.

In 2011 in Houston, shortly before launching a campaign for the presidency, Gov. Rick Perry hosted an almost identical prayer rally, organized by the same controversial group, the American Family Association. 8,000 people pre-registered. 30,000 showed up that day at Reliant Stadium. The event was declared a massive success. Bobby Jindal, incidentally, was one of the first high-profile elected officials to endorse Perry, who catapulted to the top of the polls before blowing himself up on live television.

It may seem somewhat ironic that, today, Jindal is the one with the cowboy boots and the belt buckle, and Perry, who is also preparing for another presidential campaign, traded in his contact lenses for a pair of black, square-framed glasses and swapped his boots for a pair of orthopedic shoes. Today, Bobby Jindal is hosting prayer rallies, and Rick Perry is hosting roundtables with leading conservative intellectuals.

On Saturday, outside of the Pete Maravich Assembly Center, hundreds of protesters had gathered. They weren’t simply protesting the involvement of the American Family Association, which is recognized as a hate group by the Southern Poverty Law Center; they were protesting Bobby Jindal.

Only a week before, the Jindal administration indicated that it may cut more than $380 million to higher education. Since taking office in 2007, Bobby Jindal has already slashed $700 million from the state’s public universities, the most dramatic reductions, on a per capita basis, in the country. Louisiana State Treasurer, John Kennedy, warns that if Jindal follows through on another round of cuts, higher education would be gutted. “I don’t know how they can do it without massive layoffs,” Kennedy said. It’s not difficult to understand why so many LSU students and faculty members were just as offended by Jindal’s decision to promote himself on their campus as they were by the group he selected to organize the event.

Minutes after arriving on campus, I met Kevin Cope, President of the LSU Faculty Senate. Earlier that morning, Cope had publicly lambasted Rolfe McCollister, a member of LSU’s Board of Supervisors, the head of Jindal’s SuperPAC, and the publisher of The Baton Rouge Business Report. This was a political event, Cope said, and McCollister had improperly used his position with LSU to advance Jindal’s campaign for the White House. He urged protestors to boycott McCollister’s publications and advertisers to think twice before cutting a check. I asked him why.

“The Baton Rouge Advocate did a public records request and discovered that Rolfe McCollister is largely responsible for orchestrating this event,” he explained. “So, my suggestion for people who want to make a statement is they also exercise their free rights as citizens and let merchants (who advertise in McCollister’s publications) know that they’ll scale down their purchases until such a time that they advertise in outlets that support the university.” He then called on McCollister to resign his position on the LSU Board of Supervisors.

Jindal, however, repeatedly insisted that the prayer rally was not a political stunt. “It’s a religious event,” he said to members of the press shortly before taking the stage.

Peter Jenkins, the LSU graduate student responsible for organizing the protest, didn’t parse words. “I think it’s important to note that Gov. Jindal has aligned himself with a group that thinks Native Americans deserved their genocide because they didn’t appropriate white culture, that single mothers are bad for society, that black people are more likely to be criminals, that women shouldn’t be able to make their own health decisions, that the First amendment only applies to Christians, and that think homosexuality should be illegal and carry the death penalty,” he explained.

I grew up in Alexandria, Louisiana. I’ve been to my fair share of prayer rallies, passion plays, and evangelical church services. When I was in high school, Franklin Graham came to town and packed the Rapides Parish Coliseum. I sat up in the rafters with two of my friends, and after Graham dimmed the lights and asked the audience to close their eyes while those who wished to be born again walked up to the stage, the upper deck emptied. Michael W. Smith played his hit song “Place In This World.” Hundreds of born-again evangelical Christians were born yet again.

I readily acknowledge: I am cynical about events like these. I have a degree in religious studies from Rice University, and I spent four years studying, observing, and participating in all sorts of religious rituals and ceremonies. The relatively recent phenomenon of mega-church services held inside of impersonal, generic arenas- liminal spaces that are retrofitted to resemble enormous television studios- has always seemed, to me, inauthentic and absurdly theatrical. But I also recognize that the religious experience is less about the space and more about the service- the music, the prayer, the sermon, and the fellowship.

When we finally arrived at the entrance of the Pete Maravich Assembly Center, we were greeted by a guy in his late twenties dressed in a suit. He’d arrived from D.C. the night before and had been hired to manage the press. That was my very first interaction at Bobby Jindal’s “religious” event: a well-dressed guy who had been flown in from D.C. to handle the media.

He ushered us down a flight of stairs, pointed out a back room they had reserved for the press, and then escorted us to an empty fold-out table at the back of the floor.

I had been told that 7,000 people were pre-registered, but it was immediately obvious that less than half had actually shown up. When Rick Perry held his prayer rally in 2011, he was a popular three-term governor of a big state who was considered, at the time, a formidable candidate for the presidency. Bobby Jindal, on the other hand, is an unpopular governor of a small state whose presidential ambitions are largely dismissed as quixotic and delusional.

If he required any additional proof of his unpopularity at home, all he needed to do was look out into the stands: Bobby Jindal wants to be the next President of the United States, but he can’t even fill up a quarter of a college basketball arena in his own hometown. He can’t even host a rally on the campus of LSU without attracting hundreds of protestors. 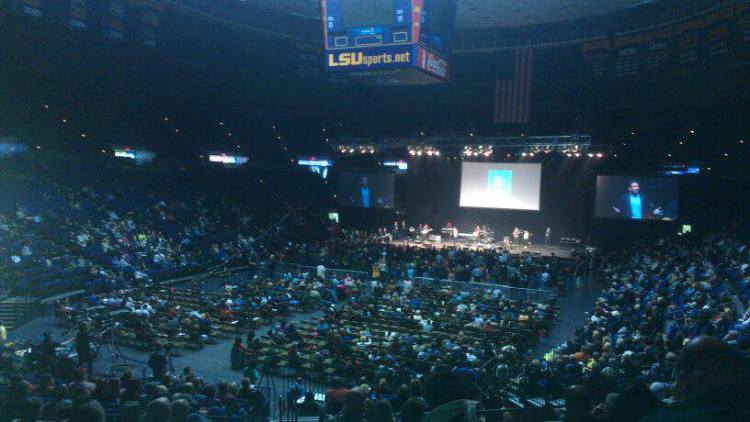 There was something else striking about Jindal’s prayer rally: He’s a practicing Catholic, and the audience, almost entirely, was made up of non-denominational, evangelical, charismatic Protestants. In between sets of contemporary Christian pop music and fiery sermons about the decline of America, the scourge of homosexuality, and the need to elect more born-again Christians to public office, participants clustered together in small groups and prayed demonstrably; some burst into fits of glossolalia. A man next to us remained on the ground for so long that someone asked the police to check on him; he looked as if he may have passed out.

It was like a rave without the ecstasy or Bonnaroo without the psychedelics, participatory performance theater. It’s hard to imagine that Gov. Jindal worships this way when he kneels behind the pews of St. Aloysius Catholic Church in Baton Rouge.

But despite all of that and contrary to what Gov. Jindal claimed, ultimately, his prayer rally had nothing to do with extolling evangelical Protestantism and almost everything to do with promoting himself. His prayer rally was, definitively, a political event specifically designed to brandish his bona fides as a conservative culture warrior. He may have only been on stage for less than 20 minutes, but the jumbotron on stage prominently displayed his name and a pithy quotation about America and religious liberty throughout the entire, six-hour-long event.

While all of this was going on, Kyle Plotkin, Bobby Jindal’s chief of staff and a young, affable guy who earned his way up the ranks, paced around the aisles. He shook hands with as many people as he could. He was all smiles. He made small talk with the press. When I asked him how many people he thought were in attendance, he answered earnestly, “7,000, but maybe check with the Louisiana State Police.” It was more like 3,500.

Plotkin was not there to pray. He was there to observe and to do whatever he could to help his boss. On stage, speaker after speaker urged America to become a Christian nation, to elect more Christians, to break laws that prohibit tax-exempt churches from endorsing candidates from the pulpit. Shortly after Jindal wrapped up his testimony, yet another evangelical preacher took the stage and delivered yet another sermon. Plotkin wasn’t paying attention to what was being said on stage. He was chatting with a friend of mine.

He told my friend that he was Jewish. It almost seemed like a defiant confession, even though the fact had never been a secret or even remotely interesting. But that day, I suppose, it did seem noteworthy, because aside from various members of the media, there is a good chance that Bobby Jindal’s chief of staff was the only non-Christian in the entire audience. If this had merely been a religious event for evangelical Christians, I imagine he would have no reason to attend.

But that’s not what this was. They’d flown in operatives from Washington, D.C.; they promoted this thing on official state letterhead; they spent weeks working their back channels at LSU; they skipped out on a high-profile event in Iowa, and in courting the controversial American Family Association, they ensured that the event would receive at least some media coverage. This was unabashedly political, and perhaps as a result, it completely backfired. Speakers backed out. The media didn’t pay much attention at all. And half of those who had pre-registered for the event didn’t even show up.

Bobby Jindal prayed, but he failed to rally.

For us, the belt buckle was the bigger story.