Today, the nation learned that freshman Congressman Vance McAllister (R- Duck Dynasty) is, in fact, a quack. Last November, McAllister stunned the Louisiana political commentariat and soundly defeated State Senator Neil Riser, a victory that many attribute to the support he received from Phil and Willie Robertson from the hit reality television show “Duck Dynasty.” McAllister, who ran on a family values platform, emphasizing his Christian faith and his disdain for Washington politicians, was caught, on camera, cheating on his wife with one of his staffers, a woman named Melissa Peacock.

Mrs. Peacock and her husband Heath were close friends of the McAllister family and major donors to his campaign. Recently, according to my sources, both the Congressman and his wife posted comments on Mrs. Peacock’s Facebook account, which has now been deleted.

At first blush, this may seem like yet another story about a hypocritical politician, and no doubt, Congressman McAllister is a hypocrite. If he truly cared about his family, he would have resigned already. Instead, taking a page out of David Vitter’s playbook, he issued a hastily worded and tone deaf mea culpa, reminding voters that he was elected to be a different kind of politician and then asking for the media to respect his privacy, using his children as cover. Quoting:

From day one, I’ve always tried to be an honest man. I ran for congress to make a difference and not to just be another politician. I don’t want to make a political statement on this, I would just simply like to say that I’m very sorry for what I’ve done. While I realize I serve the public, I would appreciate the privacy given to my children as we get through this.” 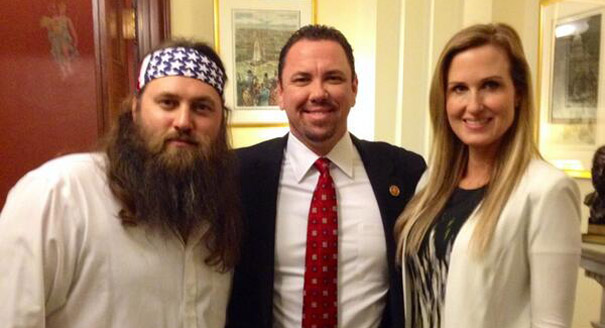 But while the national media gawks over the lurid details and focuses on Congressman McAllister’s rank hypocrisy, they’re missing the real scandal here: Who leaked the video, and was this leak purposely timed? After all, this video was recorded nearly four months ago, from inside the Congressman’s own district office.

To borrow a horror movie cliche, the call was coming from inside the house.

The story was first broken at 12:19PM by The Ouachita Citizen, a fledgling website that claims to have a paid readership of more than 5,200 people but, based on third-party web traffic analytical data, likely has a daily audience of between 200-300 unique visitors. An hour and a half later, the story was on the front page of Politico. An hour later, it was covered by almost every national news outlet in the United States- Fox, CBS, The Washington Post, NBC.

With all due respect to John Bresnahan and Jake Sherman, the two Politico journalists who broke the story nationally, it defies logic that they somehow randomly stumbled on a story published on a website that even most Louisianians have never heard of and verified the authenticity and provenance of a blurry surveillance video (which, by the way, was behind a paywall) all within a span of 90 minutes. No, this leak was coordinated and planned, and more than likely, considering it was recorded nearly four months ago, it had been in the works for a long time.

Notably, The Ouachita Citizen strongly supported State Senator Neil Riser, calling Mr. McAllister a “liberal” in a bizarre, apoplectic rant, which, ostensibly was an endorsement of Riser but reads more like a scathing attack against McAllister for supporting Medicaid expansion under the Affordable Care Act. In its report on the McAllister video, The Ouachita Citizen claims to have received the video from an “anonymous” source, but somehow, inexplicably, they were able to verify the video’s provenance. The Ouachita Citizen, in my opinion, bordered on recklessness in their reporting, publishing Mrs. Peacock’s home address and implying, without any evidence whatsoever, that she may have never actually married her own husband. It seemed, to me, nasty and personal, motivated by more than a mere desire to inform the public.

Perhaps not surprisingly, only a couple of months before their endorsement, Neil Riser spent $1,500 to advertise in The Ouachita Citizen.

To quote LSU Professor Bob Mann, “In between bouts of groveling for forgiveness, if I were Vance McAllister I’d be demanding the FBI find who leaked that video.”

As egregious as some may find Congressman McAllister’s behavior, if, in fact, his relationship with Mrs. Peacock was consensual and not coerced in any way and if Mrs. Peacock was being fairly compensated for her actual work and not simply for her services as the Congressman’s paramour, then neither of them broke the law.

However, as James O’Keefe can attest, there are laws that expressly prohibit bugging federal offices, and recording surveillance footage from a federal office- without consent; it is a felony. There are no “whistleblower” protections for someone who sneaks into a federal office, uses their cell phone to surreptitiously record surveillance footage of a man and a woman kissing, and then leaks that footage to the state and national media. The person who leaked this footage may believe they were performing a public service- exposing a Congressman as an adulterer and a phony, but in so doing, they also compromised the security of a federal office and placed federal employees in potential danger. Now, the entire world knows the locations of security cameras in the Congressman’s office; they know where the blind spots are, and they know the lag between those cameras and the blind spots.

Congressman McAllister’s constituents may be outraged by his infidelity, but the country should be more concerned that someone with a cell phone camera walked into a federal office, turned off the lights, and recorded the office’s security terminal. Adultery may be a sin, but it’s not a crime. This, however, is a crime, and considering that, in recent years, members of Congress have been threatened by letters containing ricin and anthrax and that Representative Gabrielle Giffords was nearly slain by an assassin’s bullet, it should be taken very seriously.

There are other, important reasons the public and the media should be concerned and suspicious about the timing and the purpose of this video.

To be clear, I have absolutely no reason to believe that Congressman Alexander himself is in any way connected with the release of this video. With all due respect to the former Congressman, I doubt he possesses the technological savvy or expertise to even know how to orchestrate something like this, and besides, he has nothing to gain from it. But I think the media should begin to scrutinize staff members who Congressman McAllister retained. According to my most trusted sources, people who know more about this stuff than anyone else in the entire state, the real story isn’t that Vance McAllister cheated on his wife; it’s that someone, somewhere, for some reason sat on this video footage for nearly four months, and there’s a good reason it was released when it was and how it was.

Vance McAllister rents his district Congressional office from Bill Land, an architect whose offices are directly next door. It is unclear whether Mr. Land also owned and controlled the building’s surveillance equipment.

Mr. Land, incidentally, donated $2,600 to Neil Riser’s Congressional campaign. He is not listed as a contributor on any of Vance McAllister’s campaign finance reports.

I know more than I am currently willing to report, but suffice it to say, the Louisiana Republican Party and its leadership have never been happy with Congressman Vance McAllister’s outspoken support of Medicaid expansion. Here’s what Congressman McAllister recently said at an event in Washington, DC (bold mine):

“I thought, ‘You know what, I’m not going to skirt the issue. Republican, Democrat, it don’t matter. Those working poor have paid that money in. That money’s going to Washington. It’s their money,’ ” he said. “For me to say I’m against Medicaid expansion makes me the best congressman California and Massachusetts could ever have, because that’s where that money’s gonna go.”

“It’s about doing what’s right. You keep your people healthy, they’ll continue to work. They’ll do better,” he said. “The money’s there. As a business guy, I don’t like Gov. Jindal standing up there and trying to use political points” to argue that the state can’t afford the small fraction it would eventually have to pay to draw down billions in benefits. “It don’t take Einstein to figure out that’s a pretty darn good return on your investment.”

I’ve been told that party leaders were aware of Congressman McAllister’s plan to continue emphasizing the need for Medicaid expansion, not just in front of Washington audiences but also in meetings throughout Louisiana. And that, more than anything, may explain why these videos were released when they were.

It’s like the reverse, redneck Watergate: A political party that spies on itself.