Yesterday, on the website The Hayride, Tom Bonnette, the former Town Talk reporter, posted a hit piece against the Louisiana Budget Project and its founder Melissa Flournoy.

I know Mr. Bonnette, and I know Ms. Flournoy. Mr. Bonnette is plain wrong. His post attacking the Louisiana Budget Project was, in my opinion, irresponsible, unprofessional, and sloppy reporting; it was reckless, bordering on the unethical. Instead of accomplishing what he apparently set out to do– “exposing” the Louisiana Budget Project as a nefarious and egregiously partisan organization (which it most certainly is not), Mr. Bonnette unwittingly exposes his own extremism and biases. With his references to conspiracies like the “new world order” and hackneyed, stupid tropes about the machinations of George Soros, Mr. Bonnette abandons any attempt to frame an objective, truth-seeking narrative and devolves into an almost paranoiac rant. And it’s a shame.

From its inception, the Louisiana Budget Project has been upfront and transparent about its mission, its policy agenda, and its funders. There’s no great mystery here. Anyone with an Internet connection can find this out within ten seconds. No one is attempting to hide anything.

Again, I know many of the folks behind the Louisiana Budget Project and Louisiana Progress, including Ms. Flournoy. Indeed, I actually contributed to The Louisiana Progress Journal. And the plain and simple truth is this: Mr. Bonnette misreported the story. This isn’t a “sham” organization that takes its orders from a boogeyman billionaire intent on ushering in “a new world order;” that is laughable, ridiculous, over-the-top. This is a non-profit organization dedicated to providing Louisiana-centric scholarship on Louisiana issues that uniquely affect working class families. Mr. Bonnette and the folks at The Hayride may not agree with them on substantive policy, and that is absolutely their right. But suggesting that they and dozens of other outstanding organizations all over the country are shams– without conducting an ounce of real research and relying entirely on the fact that a George Soros-backed non-profit organization gave them some funding (which has always been well-known to anyone paying attention)– is shoddy work, and with respect to Mr. Bonnette, it deserves to be called out.

It’s also ironic: If conservatives want to lecture progressives on billionaires giving money to influence politics and policy, then they need to begin by taking a good, hard look in the mirror. The Koch brothers have used their wealth to fund political campaigns that advance economic policies which would make them even wealthier. Soros, on the other hand, has given away billions, all over the world, to help the less fortunate and to expose political and media hypocrisy. Mr. Bonnette mentions Media Matters as an example of Soros’s destructive influence; I think Media Matters is an incredibly valuable resource.

In the past, I’ve called out and criticized two conservative organizations in Louisiana: The Pelican Institute for Public Policy and the Louisiana Family Forum. I criticized the Pelican Institute for holding itself up as Louisiana’s “first think tank,” when, in actuality, it was founded by a New Yorker, created- almost entirely- by out-of-state interests, and built on borrowed scholarship from national conservative think tanks. The Louisiana Budget Project and Louisiana Progress are none of those. And with respect to the Louisiana Family Forum, my criticism was not focused on their sources of funding (with the exception of a nationally-recognized hate group) but on the ways in which they transferred tax-deductible donations from their 501c3 to their political advocacy arm, a 501c4, allowing them to establish a campaign apparatus with tax-deductible money (I don’t know if this is illegal, but it most certainly seems unethical, considering that donations to their 501c4 would otherwise not be tax-deductible). I don’t have the proof, the hubris, or the belief that these conservative non-profits are engaging in some sort of new world order conspiracy; I think they’re guilty of misleading Louisiana. And again, that has never been the case with the Louisiana Budget Project or Louisiana Progress. You can disagree with their policy positions, but as non-profits, they’ve always been on the up-and-up, which shouldn’t be surprising when you consider that both were created by the founder and former President of the Louisiana Association of Non-Profit Organizations (LANO).

I assume that Mr. Bonnette is transitioning from being a journalist into being a partisan blogger, because, without a doubt, his post would never pass muster with his former editors at The Town Talk. It does, however, pass the scrutiny of the editor of The Hayride, Scott McKay, who posted this today on Facebook: 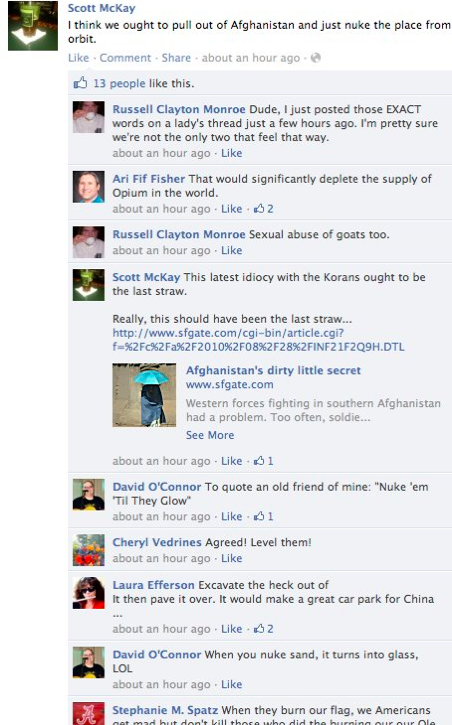 Yeah. Ha. Ha. Ha. Nuclear weapon. Millions of innocent people dead. Parking lot for China. Americans burn the Koran, and we apologize! That’s the last straw! Sand turns into glass (Someone needs to tell David O’Connor that Afghanistan is not a desert). Seriously, this is disgusting, rancid, jingoistic bile, and Scott McKay hopes to capitalize off of his opinions on his website through people like Lt. Governor Jay Dardenne, whose campaign took out $900 in ads on The Hayride.

Thankfully, Louisiana is fortunate to have some intelligent, compassionate, and ethical people who think deeply about policy, people like those involved in the Louisiana Budget Project and Louisiana Progress.

One more thing from Scott McKay’s Facebook, which puts this all into context: 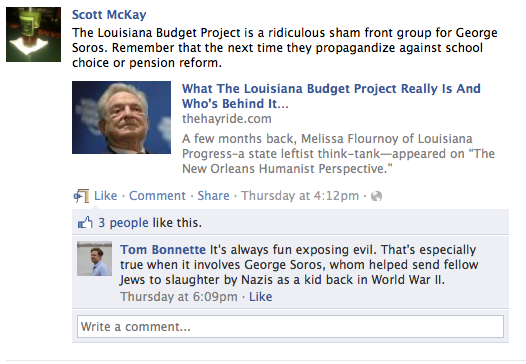 Mr. Bonnette thinks he’s exposed “evil.” He thinks that George Soros, a Hungarian Jew, sent “fellow Jews to slaughter” when he was a child. And why? Because, as a kid, in order to survive, Soros told the Nazis he was a Christian. Mr. Bonnette’s comments, which mimic comments made by people like Ann Coulter and Glenn Beck, are nothing more than hate-mongering hyperbole. It turns my stomach: Blaming a Jewish child for sending “fellow Jews to slaughter” is an almost unfathomably loathsome remark, no matter how you land on the political spectrum. And attempting to connect this stupid conspiracy theory to the Louisiana Budget Project– to pat yourself on the back for “exposing evil”– borders on delusional narcissism.