They’re considered one of the most influential lobbying organizations in the State of Louisiana. On their website and their Facebook page, they’re upfront about their true mission: Influencing legislators and legislation. They publish an annual legislative scorecard, and every year, they host a lavish dinner for selected legislators, doling out awards and commendations.

And every year, they raise and then spend hundreds of thousands of dollars in tax-deductible donations.

The 501c3 is the money-maker, the Louisiana Family Forum (LFF), the tax-deductible half of the organization. But because it’s a 501c3, the LFF is limited by how much money it can spend on lobbying. Thankfully, there’s an easy way around this problem. The other half of the organization is the Louisiana Family Forum Action (LFFA), their 501c4. LFFA is still tax-exempt, but, because it can spend as much as it wants on lobbying, there are no tax-deductible donations. It’s an important distinction.

The Internal Revenue Service explains the lobbying constraints on 501c3s:

In general, no organization may qualify for section 501(c)(3) status if a substantial part of its activities is attempting to influence legislation (commonly known as lobbying).  A 501(c)(3) organization may engage in some lobbying, but too much lobbying activity risks loss of tax-exempt status.

Legislation includes action by Congress, any state legislature, any local council, or similar governing body, with respect to acts, bills, resolutions, or similar items (such as legislative confirmation of appointive office), or by the public in referendum, ballot initiative, constitutional amendment, or similar procedure.  It does not include actions by executive, judicial, or administrative bodies.

An organization will be regarded as attempting to influence legislation if it contacts, or urges the public to contact, members or employees of a legislative body for the purpose of proposing, supporting, or opposing legislation, or if the organization advocates the adoption or rejection of legislation.

The Louisiana Family Forum, the 501c3 half, defines itself to the IRS as an educational organization. Their mission is simply stated, “Education and Promotion of Family Values.” According to their most recent 990 report, the LFF has spent hundreds of thousands of dollars every year for several years on salaries and “consulting” services (also listed as “Other” under “Fees for Services”). It spends tens of thousands of dollars every year on travel costs. Despite this, though, it only itemized $35,628 in lobbying expenditures in 2009. 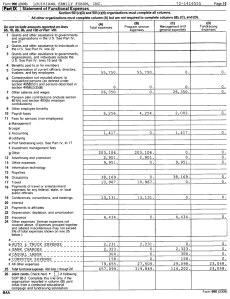 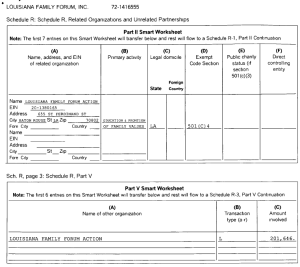 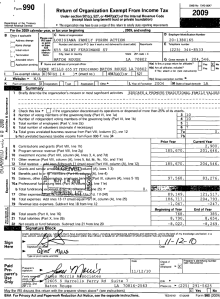 To be clear, I believe the only reason the LFF would create the LFFA, a separately organized and legally distinct off-shoot, is because they recognized a 501c4 better allows them to lobby.

Here’s the problem, though: The Louisiana Family Forum receives hundreds of thousands of dollars every year in tax-deductible donations, and the Louisiana Family Forum Action, which is not tax-deductible, receives nearly 99% of its annual revenue from its sister organization, the other half. In other words, if you give money to the LFF, which you can deduct from your taxes, the chances are that you’re also helping to fund the LFFA, which isn’t tax-deductible. From Hurwit and Associates, a firm that specializes in providing legal advice to non-profit organizations:

Suffice it to say that if no more than five to ten percent of an organization’s total efforts are devoted to lobbying, it is probably acting within legal limits.

Many organizations shy away from activities they presume to be lobbying but which in fact fall outside of the definition of lobbying, which is narrowly defined by the IRS. Generally speaking, lobbying is the expression of a view or a call to action on specific legislation. Lobbying does not include, for instance, nonpartisan analysis of legislation, the expression of a position on issues (as opposed to legislation) of public concern, or action taken in “self-defense” of the organization.

If more than an insubstantial amount of an organization’s resources are devoted to lobbying, the organization may wish to choose what is called a 501(h) election. This allows the organization to expend up to approximately 20% of its funds on lobbying.

If you wish to lobby more than that, you might want to consider establishing a separate 501(c)(4) tax-exempt organization specifically for the purposes of advocacy and lobbying. The main difference between 501(c)(3) and (c)(4) organizations is that contributions to the latter are not tax-deductible.

Notwithstanding the serious questions about whether or not the Louisiana Family Forum expends a substantial amount of its resources on lobbying for specific legislation, there’s another problem: If a 501c3 gives money to a 501c4, it has to be spent like 501c3 money, which means it can’t just be moved around to fund a lobbying apparatus. From SourceWatch (bold mine):

The U.S. tax code makes special provision for non-profit groups which are, once approved by the Internal Revenue Service, exempt from paying income tax.

However, whether contributions by individuals can be claimed as a deduction against personal income tax depends on whether the organisation is registered as a non-profit group under section 501c(3) or 501c(4) of the tax code.

Contributions to a 501(c)(3) organization can be claimed against income tax but donations to a 501(c)(4) entity cannot. While 501(c)(3) groups – which range from religious organizations, traditional service provision charities through to advocacy organisations – are more attractive to individual donors, the tax code places restrictions on the amount of funds that can be spent on lobbying and bans funds being used on election campaigns. However, what constitutes lobbying – defined as urging a vote on legislation – and educational activities is one of gray zones that is constantly debated.

From a fundraising point of view it is much harder to raise money for a 501(c)(4) group, because individual donors cannot deduct the contributions from their taxable income. However, such organizations are free to spend as much of their funds as they like lobbying on legislation.

So, what does this all mean? 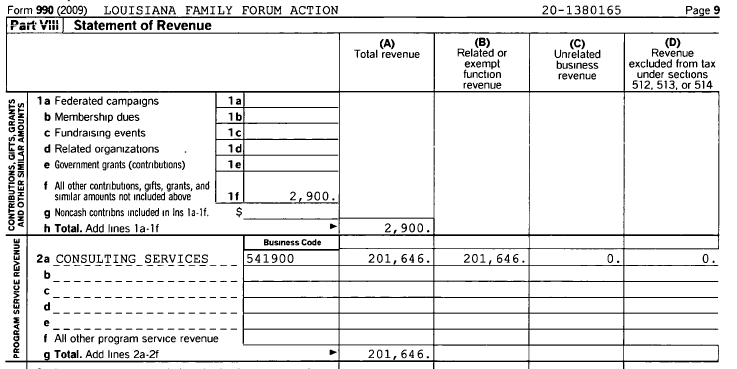 Apparently, the LFFA spent every tax-deductible dime they received from the LFF on “consulting services.” How much did the LFF spend on consulting services during the same time period? Officially, nothing, but curiously, the LFF lists $203,106 as “Other” under “Fees for Services (non-employees).”

It’s also worth noting that the LFF disclosed they spent $35,628 with the LFFA specifically for “lobbying expenses.” This begs the question: How much money did the LFFA state as lobbying expenses? Exactly zero dollars and zero cents, at least according to their most recent 990.

Given the ways in which both the LFF and the LFFA vaguely describe their expenses, it’s difficult to determine what they’re buying with the hundreds of thousands of dollars they spend every year on consulting services and services for “non-employees.” In 2008, the LFF itemized over $123,000 as expenses related to its “newsletter;” the next year, the number shrank to less than $14,000.

But what is clear, however, is that the Louisiana Family Forum is widely considered as a powerful and influential force in the Louisiana legislature. Just last week, at the invitation of Congressman Steve Scalise, Gene Mills, the LFF’s Executive Director, delivered the opening prayer for the United States Congress. Reverend Mills appears to be on a hot streak.

While he was in Washington, D.C., his organization successfully prevented the repeal of the Louisiana Family Forum’s signature piece of legislation: the Louisiana Science Education Act. The Louisiana Family Forum, along with the Discovery Institute, a Seattle-based think tank that promotes “intelligent design,” wrote the Louisiana Science Education Act in 2008. It was then introduced by State Senator Ben Nevers, who publicly admitted that he was acting at the request of the LFF, and subsequently signed into law by Governor Bobby Jindal. Nevers, the current Chairman of the Senate Education Committee, does not have a bachelors degree; Jindal, on the other hand, has a degree in Biology from Brown University.

Only a few years prior, in 2004, Dan Richey, the LFF’s “grassroots coordinator,” was hired to work on Senator David Vitter’s first campaign for the United States Senate. Vitter paid Richey over $17,000, and three years later, Vitter attempted to earmark $100,000 in federal funds so that the Louisiana Family Forum could draft model legislation for public school science education. At the time, the LFF, an organization with an overtly religious mission, made it clear: They wanted to allow the teaching of creationism and intelligent design in the science classroom. The earmark may have failed, but the LFF still pressed on.

Last year, Richey, incidentally, was also paid handsomely as a “grassroots” consultant for Roger Villere’s campaign for Lieutenant Governor. Although he lost the election, Mr. Villere was and still is the Executive Director for the Louisiana Republican Party.

If lobbying is, in fact, the “expression of a view or a call to action on specific legislation,” then what do you call it when a tax-exempt, tax-deductible organization actually writes the legislation?

The Louisiana Science Education Act isn’t the only piece of “specific legislation” that the LFF has targeted. Two weeks ago, Gene Mills gloated that he was able to kill HB112, which would have better protected school children from bullying, by simply writing a floor note to the legislature.

There’s a good reason we have laws that govern the ways in which tax-exempt, tax-deductible organizations can influence our democratic process, and there’s a good reason we also have laws that govern the activities of lobbyists. Subverting or skirting those laws, no matter who you are or how noble your cause may be, is never acceptable. Neither is using religion as camouflage. The Louisiana Family Forum may be led by a reverend, but it’s not a church.

When Governor Jindal was elected, he vowed to ensure that Louisiana’s ethics laws met “the gold standard.” Although, ironically, Mr. Jindal has continued to push back against requirements for increased transparency in the Governor’s Office, he still signed into law a sweeping set of disclosure requirements for almost everyone else in the State who could, potentially, influence legislation, even volunteer members of local commissions. Yet an organization that is widely considered as one of the most powerful lobbying forces in the State, somehow, they can spend hundreds of thousands of dollars without actually disclosing what they’re buying.