On Saturday in Shreveport, I spoke before the 2011 class of the New Leaders Council- Louisiana about online political activism and the role and influence of the blogosphere. If you read this site, you’re probably not too surprised that I have a few things to share about the blogosphere, and I thank the NLC-Louisiana fellows for hearing me out.

Today, The New York Times ran an article about the waning popularity of blogs, suggesting that social networking websites like Facebook and Twitter are eclipsing blogs and becoming the preferred platforms for connecting with others to share information, videos, and opinions.

Blogs went largely unchallenged until Facebook reshaped consumer behavior with its all-purpose hub for posting everything social. Twitter, which allows messages of no longer than 140 characters, also contributed to the upheaval.

No longer did Internet users need a blog to connect with the world. They could instead post quick updates to complain about the weather, link to articles that infuriated them, comment on news events, share photos or promote some cause — all the things a blog was intended to do.

On the surface, this seems relatively obvious and intuitive. During my presentation on Saturday, I spoke about the meteoric rise of Facebook. I joined Facebook when it was still called The Facebook; my college was one of the first dozen or so that Facebook targeted. Facebook officially launched in February of 2004; I’m not entirely certain, but I think I joined in May. Within a few weeks, it seemed like nearly everyone at Rice was on Facebook, even if most of us weren’t quite sure what the benefits were.

Facebook is now the most popular and most visited website on the internet: over 500 million users, 70% of whom live outside of the United States. As has been exhaustively reported, Facebook also played a key role in the recent revolution in Egypt. ﻿﻿I used this photo during my presentation on Saturday as an illustration: 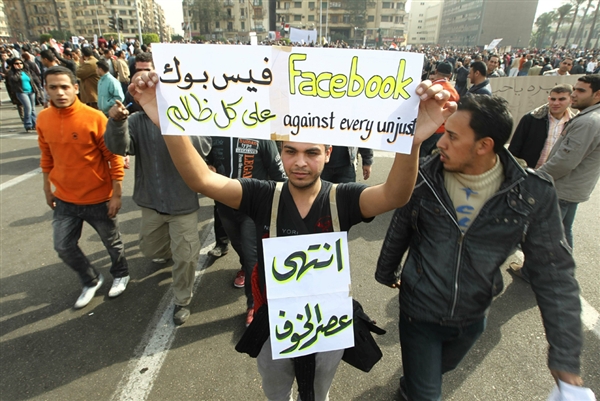 A man in Egypt has named his newborn daughter “Facebook” in honor of the role the social media network played in bringing about a revolution, according to a new report.

You have to wonder what Mark Zuckerberg thinks about all of this. During the last few months, he’s been the subject of a hugely successful and award-winning movie, The Social Network; he was named Time Magazine’s Person of the Year, and now, his website is, in part, being credited with facilitating a revolution in Egypt– a revolution that, right now, appears to have inspired a ripple effect across the Middle East. Today, there is a baby girl in Egypt named Facebook, and for the rest of her life, she will remind people of the role of a social networking website in toppling a dictator.

But still, The New York Times missed the mark today. The blogosphere is not waning. It’s adapting to rapid changes in social networking, and that’s a good thing. Again, from The Times:

Lee Rainie, director of the Internet and American Life Project, says that blogging is not so much dying as shifting with the times. Entrepreneurs have taken some of the features popularized by blogging and weaved them into other kinds of services.

“The act of telling your story and sharing part of your life with somebody is alive and well — even more so than at the dawn of blogging,” Mr. Rainie said. “It’s just morphing onto other platforms.”

I disagree with Ms. Camahort Page: It is possible to find a substantive conversation on Facebook and even on Twitter, though it’s not always easy. Lee Rainie is more on target.

Caitlin Dickson of The Atlantic responded to The Times in a post titled “Blogging’s Not Dead, Says Bloggers.”

The blogosphere is, thankfully, becoming more mature and more professional. It shouldn’t be surprising that many hobbyist bloggers are transitioning to social networking platforms. The truth is, these people are still “blogging,” in the broadest sense of the term; they’re just moving their base of operations. Facebook has a built-in audience; it’s not as easy to build a dedicated readership on your own.

But there will always be a blogosphere, and the recent proliferation of social networking websites can only strengthen the visibility and the credibility of the professional blogosphere. I agree with blogger Matt Schuler:

If you have something that can fit in 140 characters or less, share it on Twitter and Facebook.  But if you have a long, complete thought that won’t fit then write it out.  You can post the link on your social networks.

If used correctly, social networks can actually augment a blog’s readership, traffic, visibility, and credibility. Some suggest that The Times is quick to dismiss the blogosphere because of their own institutional bias against what they may perceive as a threat to traditional media. Maybe so. But more than likely, they’re still just behind the times (Pardon the pun).