A few years ago, as my brother and I were walking out of a concert at the Woodlands in Texas, a group of drunk college students, upon seeing me walk by, began to chant, “Timmeh! Timmeh! Timmeh!” I’ve learned to have thick skin when people make fun of my disability, but on that night, I must admit: I was deeply offended by those idiots. “Timmeh,” for

those of you who don’t know, was a reference to the physically and mentally disabled South Park character, Timmy, whose only defining trait, besides his wheelchair, was his constant repetition of his own name.

I didn’t say anything to those college students, but I considered, for many weeks, writing a scathing letter to Trey Parker and Matt Stone, the creators of South Park. I wanted to explain to them that, by making Timmy nothing more than the worst type of stereotype, they weren’t being funny; they were, whether intentionally or not, being hateful. Indeed, they had created an excuse for some of their more impressionable fans to replicate their hate in the real world. So what if they scored a few laughs in the process?

The main problem with Timmy was that there wasn’t anything subtle or nuanced or sophisticated about him, which, in fairness to them, they were able to develop with their other physically disabled character, Jimmy. Jimmy may

walk with crutches and talk with a confounding stutter, but he frequently reveals himself to be smart, compassionate, and reasonable. And because of this, we can laugh at Jimmy when he bungles words (I’m thinking specifically of an episode in which Jimmy tells Wendy, “You’re a continuing source of inspiration.” If you haven’t seen the episode, I’ll let you use your imagination) or when he gets into a schoolyard fight.

I ultimately decided not to write the South Park creators, and they ultimately decided, for whatever reason, to phase out Timmy and focus more on Jimmy. But upon reflection, I suppose I learned, from that experience, there’s an art and a balance to writing comedy about a disability. It’s easy to earn cheap laughs, but it’s far more challenging to earn laughs because of a character, not a condition.

Today, New York Governor David Paterson, who is legally blind, made it clear that while he can take a joke, he was offended by the depiction of him on last week’s Saturday Night Live, in which Fred Armisen used the Governor’s blindness as a way of implying that he was aloof, unprepared, and unfit for office.

It was, in my opinion, only superficially funny– the Governor struggling to find his bearings, holding up an unemployment chart upside down, and then bumbling around the set and “accidentally” blocking the camera. And had these been things that Paterson was known to do, perhaps it would be more forgivable. (Remember when McCain blocked the camera during the town hall debate?). But instead, the depiction primarily relied on the device of his blindness as a way of describing his character. 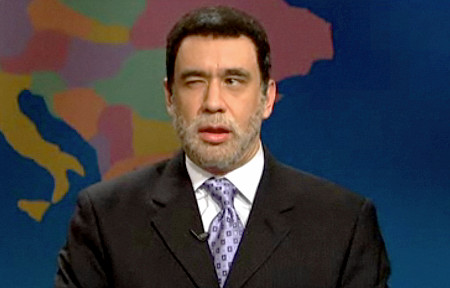 The Governor was offended, and rightly so. From The New York Times:

The governor’s communications director, Risa B. Heller, said on Sunday that the skit amounted to nothing more than cheap ridicule — a surprisingly strong reaction considering that the governor is well known for making light of his vision problems.

“The governor engages in humor all the time, and he can certainly take a joke,” Ms. Heller said in a statement. “However, this particular ‘Saturday Night Live’ skit unfortunately chose to ridicule people with physical disabilities and imply that disabled people are incapable of having jobs with serious responsibilities.

“The governor is sure that ‘Saturday Night Live’ with all of its talent can find a way to be funny without being offensive,” Ms. Heller added.

I’m sure that, like me, Paterson has learned to roll with the punches and has been conditioned to handle and even dish out stupid jokes about his disability since he was a child, but he recognized the depiction wasn’t really about him. It demonstrated a fundamental misunderstanding of his disability, and in doing so, the humor relied more on his condition than his character, a condition shared by millions of Americans. The Times continues:

When asked if it had offended him (Paterson), he kept any anger or embarrassment in check and deflected the question with an answer about high unemployment among the disabled.

“There is only one way that people could have an unemployment rate that’s six times the national average — it’s attitude,” he said. “And I’m afraid that the kind of third-grade depiction of individuals and the way they look and the way they move add to that negative environment.”

“I run the place that I work in so I don’t have to worry about being discriminated against, I think,” he said. “But the point is that a lot of people who don’t get promotions and don’t get opportunities and don’t even get work are disabled in our society.”

Paterson, arguably, is the most successful blind man in the United States of America, the chief executive of New York State, but the skit really wasn’t about him being a blind Governor, it was about him being blind. And, in this case, the metaphor of blindness allowed them to seamlessly suggest or imply that Paterson was somehow unintelligent and comically unprepared for the Governor’s Office, as if he himself was pulled “out of the freak bin.”

Some of you may think this is no big deal. It’s a comedy show, after all, known to push the envelope on social issues and hold up a mirror to our collective stereotypes and preconceived notions. That may be true, but in order for it to be successful, the writers and the actors must have an understanding of their complicity in humorously “otherizing” a real human being; there has to be a certain self-awareness. And there wasn’t.

Governor Paterson is an inspiration to millions of disabled Americans, a living example that, in this country, even a condition like blindness does not prevent someone from reaching the highest levels of government. He demonstrates what can happen when you believe in your own abilities and refuse to be constrained or defined by your disability.

No, it looks like an intelligent, funny, and dynamic leader who happens to be a blind man, and unfortunately, his blindness, pardon the pun, is all some people want to see.