For those of you who are not from Louisiana, Steve Gleason, a former football player for the New Orleans Saints, is a bona fide hero down here, and he likely would have always been considered a hero because of his role in an iconic play on the very first drive in the very first home game at the Superdome since Hurricane Katrina.

It is difficult to overstate how a simple blocked punt became such a cathartic moment, not just for the Saints, who ultimately won that game, but for the entire region. In a small but powerful way, Gleason’s blocked punt became a symbol of tenacity and hope for an entire region. In only a few short seconds, Steve Gleason had secured his rightful place in both the history of a sports team and the history of a city. It was a galvanizing moment, an announcement to the world that New Orleans was back.

Gleason resigned from professional football two years later, in 2008, and two years after that, Drew Brees led the team to its very first Super Bowl victory. It was a remarkable, stunning turnaround for a team that had been known for much of its history as the Aint’s and whose owner was openly contemplating moving the club to San Antonio. The Saints weren’t going anywhere, however.

In 2011, Gleason, at the age of 34, noticed that he was having difficulties with certain motor functions; he wondered whether his years of football had knocked some of his muscles and nerves out of place. He had just gotten married and was planning a family, so he underwent a battery of tests just to be on the safe side.

Six weeks later, his wife found out that she was pregnant.

Gleason’s prognosis was grim: He’d be fortunate to live for another year or two and beyond lucky to live for five. In short order, he would lose his ability to walk and move his arms; then he would lose his ability to talk and eat. Eventually, he would no longer be able to breath on his own. For the overwhelming majority of ALS patients, that is when they succumb to the disease.

Gleason understood that he likely would never get to know his young son, Rivers, grow into an adult, so he decided to do something extraordinary: He began recording a series of video confessionals, life lessons, and even bedtime stories that could be played for his son. He wanted his son to know him as a fully-three dimensional man and a real father.

Director Clay Tweel pored over more than 1,300 hours of video footage: Video diaries, home movies, clips from family vacations, media reports, and intimate exchanges between Gleason and his closest family and friends. We watch as Steve’s disease slowly debilitates him; it is jarring and, at times, undeniably painful, because this is the same man to whom we are first introduced as a vibrant, intensely smart, funny, and generous athlete.

But “Gleason” is not a meditation on death. If anything, it is a celebration of life and marriage and fatherhood and tenacity. We learn that Steve may have lost his physical abilities, but he never lost who he truly is as a human being. He is still a professional athlete, but today, Steve is playing against an opponent that most of us could never survive the way he has. He’s climbed Machu Picchu in a wheelchair; he’s summited glaciers in Alaska; he’s sat on stage for a concert by his favorite band, Pearl Jam, and then interviewed Eddie Vedder, the lead singer, about fatherhood; the very first time I saw him after his diagnosis, he was wheeling himself into a lecture we both attended with the Dalai Lama.

But that is not all he has done. Shortly before his body stopped cooperating with him, he launched a charity- Team Gleason, which focuses almost exclusively on providing adaptive equipment to people also suffering from ALS, and this year, when the federal government attempted to prevent Medicaid and Medicare spending for the sophisticated eye-tracking software upon which he and many other disabled Americans rely for communication, he took the fight to the nation’s Capitol. Today, the Steve Gleason Act is the law of the land.

On Tuesday, the Academy of Motion Picture Arts and Sciences selected the Tweel’s film “Gleason” to its shortlist of fifteen films vying for an Oscar for Best Documentary. Ultimately, that list will be whittled down to six films. Already, some are speculating that “Gleason” should be the rightful winner; I couldn’t agree more.

I don’t want to spoil too much of the film. Even if you’re from Louisiana and you’ve followed his every move and his every Tweet (yes, he still tweets), you will not be prepared. It’s extraordinary.

If you haven’t already, buy a couple of boxes of tissue and maybe a bottle of wine, clear your schedule for a couple of hours, and watch “Gleason.” You may be able to find it OnDemand through your home cable provider; if not, it’s also available on Apple iTunes, Vudu, Amazon Video, Microsoft, Playstation Video, and Fandango Now.

You can also rent the movie right here on YouTube for five dollars.

On a final note, about a year ago, I attended Gleason Gras, the now-annual charity event hosted by Team Gleason, and I was fortunate enough to go backstage and, with the help of Steve’s amazing wife Michel- who is just as much a shining star in the film is as Steve- let him know personally how much his advocacy for disability rights means to me. I was also using a wheelchair at the time, which is necessary for me any time I’m at a crowded concert, and I pulled up behind Steve so I could read what he was typing- with his eyes- on the monitor affixed to the front of his chair. 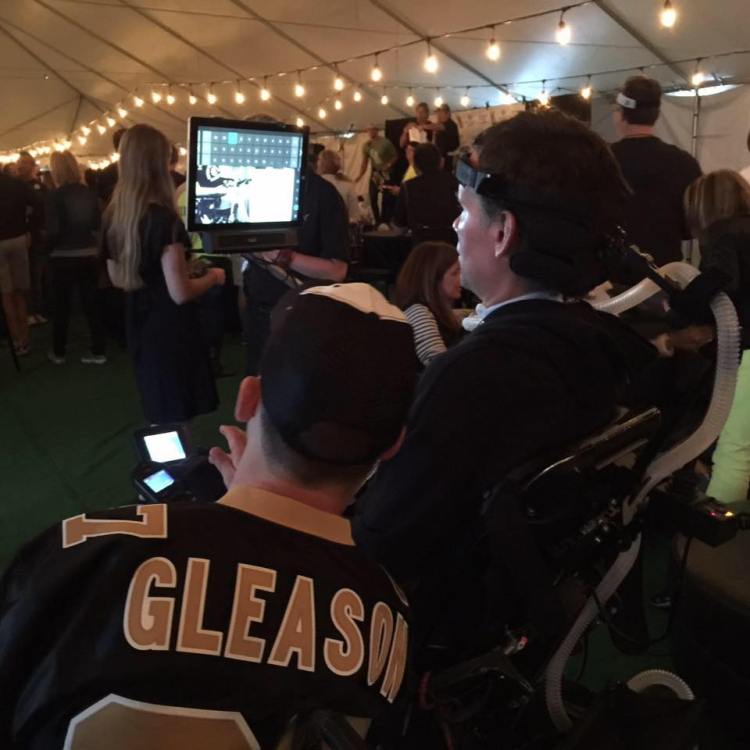 He hadn’t yet deleted the comments he had just made to a friend of his, and, out of respect for his privacy and because some of what he had said isn’t exactly safe for work, I’ll just report this: The man is genuinely, rip-roaringly hilarious.