Yesterday, I ascended the elevator to the fourth floor of the Louisiana State Capitol for the first time since Bob Mann and I posed for a selfie in front of the dead-color, underpainting of former Gov. Bobby Jindal.

Hundreds of visitors had seen this surreal masterpiece of Jindal before, a painting that manages to be both tone-deaf and color-blind, a paradoxical yet unintentionally illuminating portrait of a man who spent much of his early adult years struggling with and writing about identity politics and the allure of acculturation.

But for whatever reason, no one had thought to share this vitiligo-inspired, postmodern masterpiece with the public until I asked my friend Robin May to send me a picture she’d taken of  it a couple of years prior. Once, I received it, I published Robin’s photo of  the masterpiece to the world, in early April of 2015. 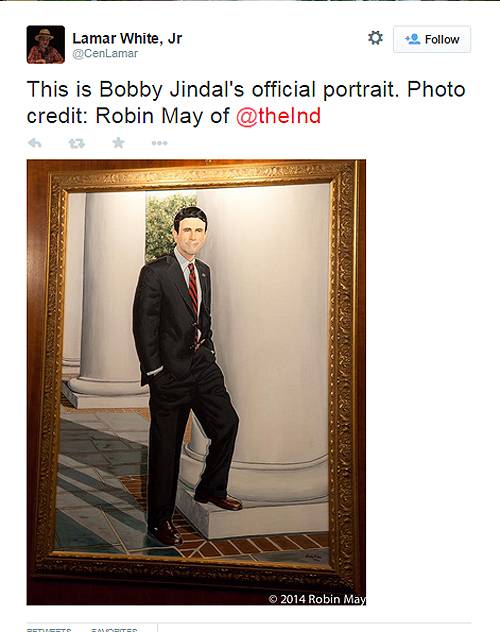 And almost immediately, the internet freaked out. Kyle Plotkin, then serving as Jindal’s communications director, attacked me as a “race-baiter,” completely failing to recognize the ways in which the portrait itself was actually both a commentary on race-baiting and identity.

I have some sad news to report: The portrait has not only been removed; it has also been unceremoniously returned to the artist’s commissioner, instead of where it belongs: As a part of the Louisiana State Museum’s collection on loan to Treasurer John Kennedy’s office.

The wall upon which it was once placed is now barren, currently being prepped for an immensely tasteful and appropriate replication of the state seal.

But I wasn’t on the fourth floor in my typical role as an art critic; I was there to hear Gov. John Bel Edwards address a small gathering of elected officials and business leaders from Central Louisiana.

The situation is bleaker than any of the artwork that once adorned the marbled and wood-paneled walls during the Jindal administration, we learned. The crisis we face is still existential, and our best hope, the governor said, was that a second special session take its job seriously.

But nonetheless, I was in a good mood, sitting on the fourth floor of the Capitol in an office led by a Democrat and staffed by many of my friends. Earlier that day, Gov. Edwards signed an historic executive order, rescinding former Gov. Jindal’s Marriage and Conscience order and expanding workforce discrimination protection to gay, lesbian, bisexual, and, for the first time ever, transgender employees. This was a big deal.

I wanted to say something, because all afternoon, I’d been reading praise for his actions. So while folks lined up to take photographs with him, I waited patiently.

As KALB assembled their camera equipment and readied him for an on-camera interview, I stood up.

“I just wanted to thank you for signing the executive order. I’ve heard from so many of my friends who are so proud of you,” I said. 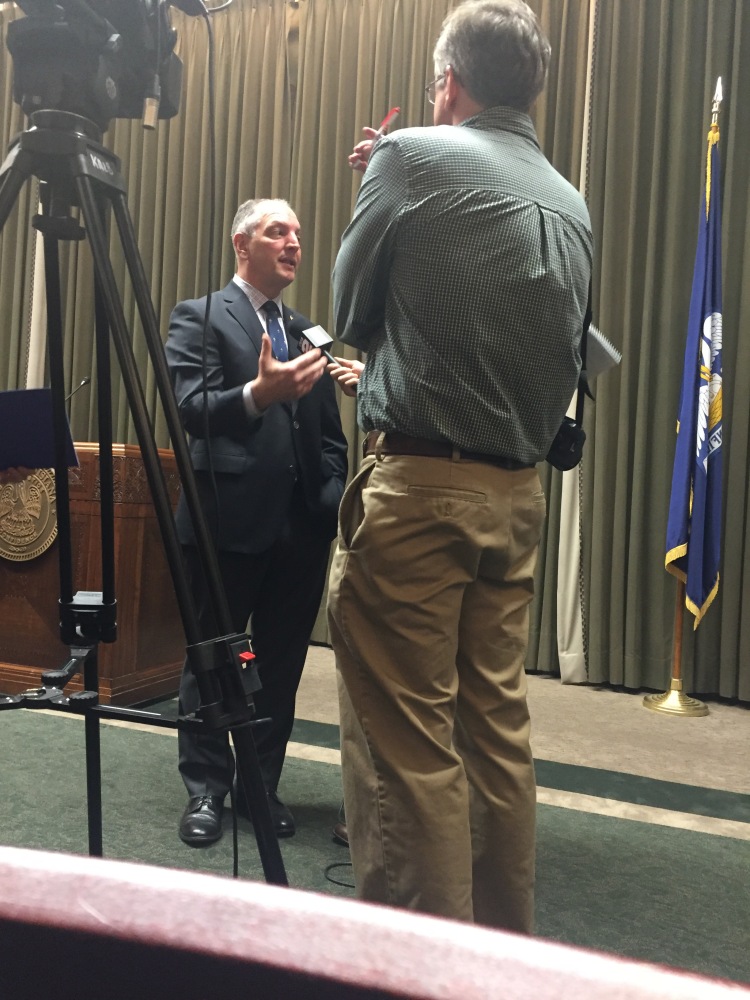 KALB conducted its brief interview, and the Governor moved onto his next event. The reporter, though, turned around and asked me, “What executive order?”

And I thought to myself, “Wow. A lot has changed up here in only four short months.” The reporter wanted to know about the budget and how it would affect the people of Central Louisiana, which were the right questions to ask. Let the so-called Family Forum obsess over the private sex lives of American citizens. Gov. Edwards ended much of that discussion with two simple signatures. That’s the easy part, because, as he said, it’s the right thing to do.

It seems appropriate and fitting to me that Gov. Edwards decided to replace Bobby Jindal’s bizarre portrait with the state seal- and not a piece of self-aggrandizing fan art that demonstrates, powerfully, a fundamental lack of self-awareness and considered introspection.

It’s a new day in Louisiana.