On Nov. 21, 2015, John Bel Edwards became the first Democrat in Louisiana to win a statewide office since 2008. During that seven year gap, Democratic candidates lost in fourteen consecutive statewide elections, and Republicans gained control of both chambers of the legislature and eventually, due to the defection of Buddy Caldwell and the defeat of Mary Landrieu, controlled every single statewide elected position in Louisiana.

According to conventional wisdom and the overwhelming majority of Louisiana’s punditocracy, John Bel Edwards’ 12-point, landslide win over David Vitter was a complete fluke. Voters weren’t really supporting Edwards; they were rejecting Vitter. While there is no question that Vitter’s past scandals were a significant influence in the last election, there are also compelling reasons to believe Edwards would have won even if Vitter’s name had never appeared on the D.C. Madam’s call log.

Most importantly, of course, is the fact that Edwards was a fundamentally decent and eminently qualified candidate who ran an earnest campaign focused on Louisiana. Vitter, on the other hand, ran as a creature of Washington, D.C., mistakenly believing that he could coast to victory by convincing voters that the gubernatorial election was somehow a referendum against President Obama. After eight years of Bobby Jindal, Louisiana is finally impatient and weary of a governor who cares more about national politics than the tough and often thankless work he was actually elected to do.

The success of John Bel Edwards provides many important lessons for Louisiana Democrats, some of which may be difficult to hear. But before I get to that, let’s make one thing clear: Edwards’ victory debunked the persistent myth- which has been repeated ad nauseum- that Louisiana is inherently and incorrigibly a deep red state.

There are good reasons why we perpetuate this narrative: For one thing, it’s just the easiest explanation about why Louisiana Democrats have lost 14 of the last 15 statewide elections and why Barack Obama lost the state by double digits to both John McCain and Mitt Romney. It’s also the narrative that Republicans in positions of power, wisely, repeat constantly, because it reinforces their influence.

But this narrative of Louisiana as a solidly red state obscures some important facts:

There are other reasons that, to paraphrase Mark Twain, rumors of the Louisiana Democratic Party’s demise have been greatly exaggerated: The state’s proportion of African-Americans- more than 31%, changes in demographics, investments in urban communities, and of course, our history. Louisiana is a state that has long been enthralled by the dialectic between populism and reform.

But I do not mean to paint too much of a rosy picture for Louisiana Democrats on the basis of one election. It will be incredibly challenging to counter nearly a decade of Republican messaging, particularly during this year’s presidential election. If Democrats in Louisiana are wise, however, they’ll take a few pages from their new governor’s playbook. They will need to resign themselves to the fact that they cannot win on some of the same hot-button issues that animate the national party.

There are twice as many pro-life voters in Louisiana as there are pro-choice voters. While the majority of Louisiana citizens favor specific and sensible gun control policy, a candidate who is perceived to be against the Second Amendment couldn’t win dogcatcher. I am not suggesting that Louisiana Democrats abandon these important issues, but if they are to win, they must become more sophisticated about how they define themselves and how they are defined by others.

Louisiana Republicans owe their success, almost entirely, to the wars they have waged on cultural and social issues. Why do so many people vote against their own economic self-interests? Earlier this week, at a restaurant in Dallas, a waiter volunteered his own explanation to me. He was a devout Christian and the son of a minister, and he makes an hour long commute to work every morning and an hour long commute back home every night so that he can keep his job and his house. “I will only vote for the person who I believe will give me a better chance of getting into heaven,” he said. “That’s why I could never support someone who is pro-choice.”

I doubt there has ever been a politician in human history who has provided someone with a key to the pearly gates, but I do not question this man’s sincere beliefs about abortion. And I also know this: If the conversation were about economic policy and not about overturning Roe v. Wade, this waiter, like so many other people, actually supports the Democratic platform.

Most Louisianians favor an increase in the minimum wage; most support the components of the Affordable Care Act; most believe in investing in higher education.

Almost everyone favors their streets being safe and their trash being picked up on time. Louisianians love their football and their festivals. We also cherish nature, from the Azalea Trail in Kisatchie National Forest to the marshlands of Cocodrie. And all of these things demand and rely on competent government.

As the last eight years in Louisiana should prove beyond any doubt, when the governor does not believe the government can ever be competent, the government is doomed to fail.

A couple of years ago, during one of the worst winter freezes in Louisiana history, I drove from Dallas to Baton Rouge by way of Houston (where I picked up my friend Zack Kopplin) to participate in a forum on the progressive movement in Louisiana. It took Zack and me more than 11 hours to get from his place in Houston to a friend’s home in Lafayette and, the next day, 3 more hours to get onto the LSU campus, but we were both determined to get there.

Zack, to those unfamiliar with his work, has been fighting for the repeal of the state’s creationism in the classroom act since I first met him nearly 6 years ago. Someone in the audience asked him what advice he would give to others who want to get involved in activism. “Be persistent,” he said. “Reach out personally to prominent experts, even if you don’t know them and they don’t know you, because you’d be surprised how many people just want to help.” In less than a year, Zack had racked up the endorsements of 78 Nobel laureates in the sciences. Because of that, despite the fact the law has not yet been repealed, the story became an international sensation, placing a spotlight directly on Gov. Jindal and earning Zack a string of high-profile interviews in publications and programs all across the world.

In a separate panel discussion, earlier in the day, I was asked what Louisiana progressives needed to do become a more influential force. “Reclaim the narrative,” I said. “Take the story back from Bobby Jindal.”

I humbly submit that both Zack’s and my advice, taken together, offers a simple prescription: Louisiana Democrats must be doggedly persistent, and simultaneously, they must retake the narrative- the story that others tell about Louisiana from the Republican establishment.

“We are an extremely populist state, but there are some bellwether issues,” Gov-elect John Bel Edwards recently said to The Advocate (bold mine). “If you’re not pro-life and if you’re not pro-Second Amendment, too many people in Louisiana will not hear the rest of your message. And so you can be 100 percent in sync with them, but they’re never going to support you. And it just so happens that I am pro-life; I am pro-Second Amendment. I’m very populist in some ways as well. And that message was successful.”

If Democrats have any chance of reclaiming David Vitter’s seat in the U.S. Senate, they should take the next governor’s advice seriously, because “the rest of the message” that “too many people in Louisiana will not hear” is the most important part.

“(I’m a Democrat because) I still believe that government has a role to play in improving people’s lives,” Edwards said. “And that you can’t do everything for everybody, both because it’s inappropriate and because it costs too much, but within reason, we ought to be helping people have a better life. And I don’t believe in a laissez faire approach to that.”

That’s a winning message. How do I know? Sometimes, a picture can speak a thousand words: 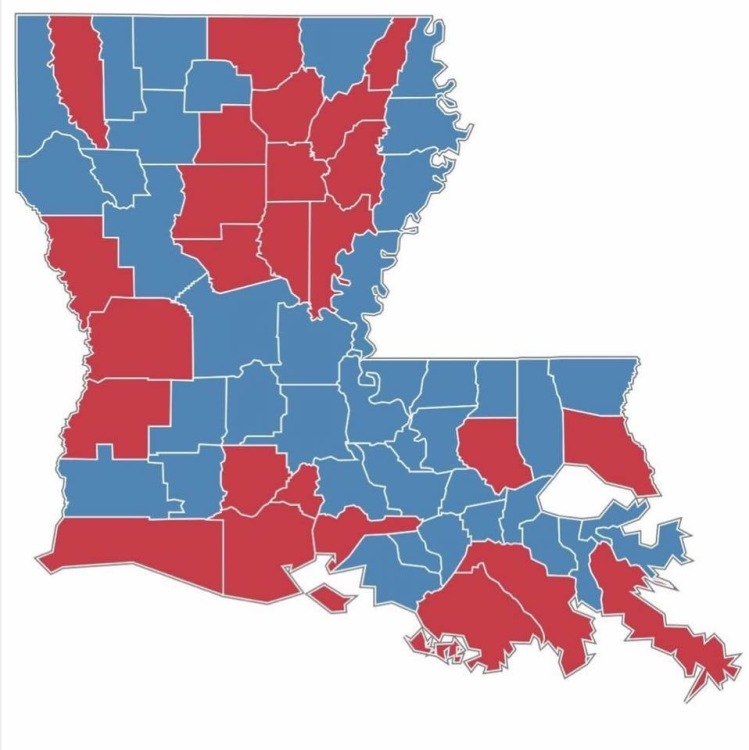