Recently, the Fund for Louisiana’s Future, a pro-David Vitter political action committee headquartered in Washington, D.C. and led by Charles R. Spies, a D.C.-based attorney originally from Michigan, launched two television commercials attacking Louisiana gubernatorial candidates Scott Angelle and Jay Dardenne. Although they have been on the air for at least a week, the commercials were uploaded onto the SuperPAC’s official YouTube account this morning.

If you didn’t know any better, you would likely believe the disclaimer (“Not authorized by any candidate or candidate’s committee”) that appears at the end of both commercials.

After all, by law, SuperPACs are prohibited from coordinating with candidates. But there is an important difference between the Fund for Louisiana’s Future and every other SuperPAC in the country: The Fund for Louisiana’s Future’s top donor is Sen. David Vitter. All told, Vitter, through his Senate campaign fund, has donated nearly a million dollars- $890,000, to be precise- to a SuperPAC supporting his campaign for Louisiana governor. The other top donors read like a who’s who of the Louisiana oil and gas industry. 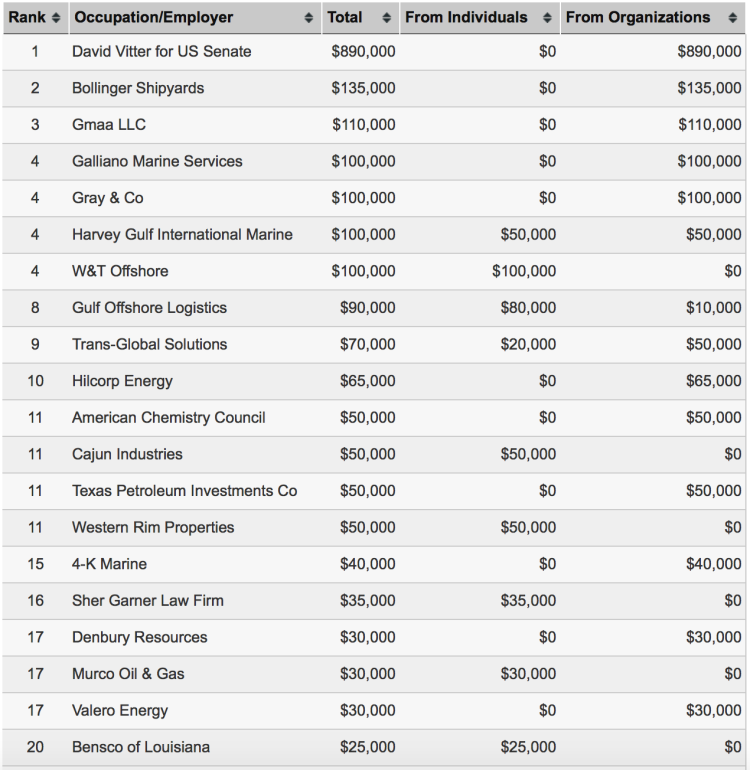 To be sure, like Vitter’s “past with prostitution,” the laws regulating campaign finance in the aftermath of Citizens United remain “murky.” It may not be expressly illegal for a United States Senator to donate nearly a million dollars from his federal campaign fund to a SuperPAC supporting his candidacy in a state election (this, after all, is the first time it’s ever been done before), but it should probably be illegal.

All told, Vitter’s donations represent about a quarter of the total money raised by the Fund for Louisiana’s Future. He is effectively bankrolling attack ads against his opponents without ever having to put his name on those ads.

If, like most people, your knowledge of the governor’s race is based on what airs on television, you’d never know that David Vitter had anything, whatsoever, to do with these attack ads. There’s a reason campaigns spend the bulk of their money on television: TV offers the highest return on investment and the biggest audience.

The Fund for Louisiana’s Future’s first attack ad, titled “Salesman,” criticizes Lt. Gov Dardenne for having a $700 a month car allowance (“enough to buy a Porsche,” the ad claims) and Public Service Commissioner Angelle for a resolution supporting “keeping fourteen cars in his own department.”

The second ad, “Common,” claims that Dardenne and Angelle, both of whom are Republicans, support higher taxes.

What’s the proof? Thirteen years ago, Jay Dardenne, along with the majority of the Louisiana legislature and the majority of Louisiana voters, supported the Stelly Tax Plan, which the Fund for Louisiana’s Future falsely claims was a tax hike on the middle class.  Scott Angelle’s sin? He supports taxing the Internet. Well, sort of. The commercial cites this article from the Associated Press. Quoting (bold mine):

On another tax issue, Angelle, Dardenne and Edwards said Congress should pass a federal law requiring companies to collect sales taxes on Internet purchases, calling it an issue of fairness that involves treating online retailers the same as brick-and-mortar stores. Vitter voted against the bill in the Senate, but said he expects Congress to eventually pass such a tax collection requirement.

As it turns out, that’s not the only thing David Vitter has said about this particular proposal. Ryan Cross, Scott Angelle’s campaign manager, transcribed Vitter’s remarks at a July forum hosted by the Louisiana Municipal Association. Quoting David Vitter (bold mine):

“I think sales tax on internet sales is coming. It’s inevitable. It passed the Senate. I voted against the particular bill, because I thought the small business tax exemption needs to be higher for very small businesses. But it’s passed the Senate and I think it will pass the house before long. We need to be properly prepared for that with state-based sales tax collection, consolidated sales tax collection. I’ll lead the effort on that with your help and that absolutely has to guarantee immediate remittance of local revenue to local government that has to be immediate. We certainly cannot depend on an appropriation process or any other passage of bills in Baton Rouge and today with modern technology there is absolutely no reason that it cannot be immediate. It can be; it has to be to guarantee you get that local revenue immediately.”

Like all SuperPACs, the Fund for Louisiana’s Future claims it does not coordinate, at all, with Vitter’s campaign. But what good are our laws against coordination when a politician can buy his own SuperPAC and that SuperPAC can then host fundraisers for the same politician? Quoting from The Advocate (bold mine):

Spies formed The Fund for Louisiana’s Future as an independent political action committee for the purpose of supporting Vitter in either Senate or governor’s bids. Spies has said the PAC operates independent of Vitter even though Vitter fundraisers also are paid by the PAC.

Finally, it is worth noting that, way back in 2013, the SuperPAC challenged the constitutionality of a 1991 Louisiana state law that capped individual donations to political action committees at $100,000. Its lawyers argued the law violated the Supreme Court’s decision, and after the state’s Ethics Board refused to lift the limit, the SuperPAC took its case to federal court and won.

Incidentally, for slightly less than $69,000, Louisiana taxpayers could have also gotten a sweet deal on a brand new Porsche.

… Or, if you care more about quantity than quality, taxpayers could have also spent that $69,000 to purchase at least fourteen of any of these cars.