A few weeks ago, on the coat tails of The Advocate‘s request, I sent Thomas Enright, Bobby Jindal’s executive counsel, an identical public records request: I also wanted any and all e-mails Gov. Jindal had sent and received on his account, the same demand he had made of former Secretary of State Hillary Clinton.

Yesterday, more than two weeks later, Mr. Enright denied my request, as well as the requests from The Advocate and the Associated Press. 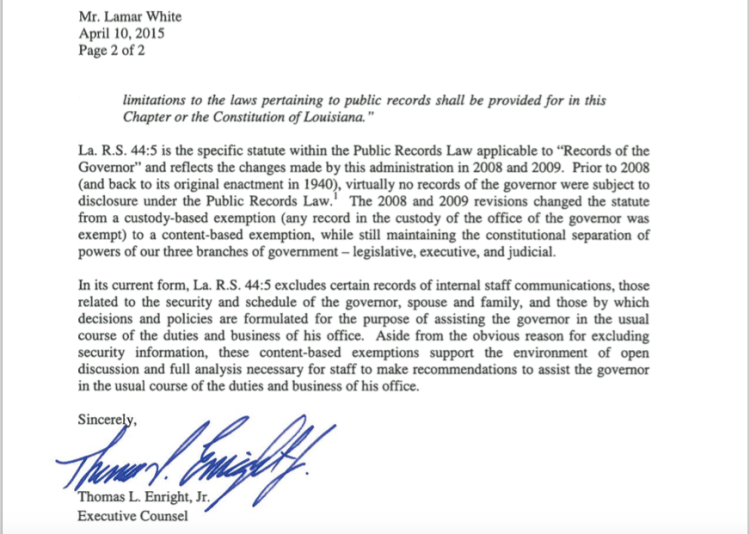 With all due respect, your legal analysis and the justifications provided for failing to disclose responsive, historical public records are incorrect and dependent on a complete misunderstanding and misapprehension of La. Rev. Stat. Ann. 44:5, the Louisiana State Constitution, applicable case law, and the common law definition of the deliberative process exemption.

Pursuant to the rights entitled to me under the law as a citizen of the state of Louisiana, I now demand the names and dates of every individual e-mail communication sent by or received by Gov. Jindal’s public e-mail account. As the custodian of those records, you are obligated to provide me with a complete listing of those records and to explain why each and every record, specifically, is entitled to an exemption or privilege under the law and is therefore considered “not responsive.”

B. (1) Except as otherwise provided in this Subsection, the provisions of this Section shall not apply to any agency, office, or department transferred or placed within the office of the governor.

(2) Notwithstanding Paragraph (1) of this Subsection, a record limited to pre-decisional advice and recommendations to the governor concerning budgeting in the custody of any agency or department headed by an unclassified gubernatorial appointee shall be privileged for six months from the date such record is prepared.

C. The provisions of this Section shall not prevent any person from examining and copying any records pertaining to any money or monies or any financial transactions in the control of or handled by or through the governor.

D. For purposes of this Section:

(1) “Deliberative process” means the process by which decisions and policies are formulated.

(3) Records “relating to the deliberative process of the governor” means all forms of pre-decisional advice, opinions, deliberations, or recommendations made for the purpose of assisting the governor in the usual course of the duties and business of his office.

Mr. Enright, as you know, I requested more than seven (7) years of Gov. Jindal’s e-mail correspondence. You have misapplied La. Rev. Stat. Ann. 44:5(D) and, in so doing, are suggesting that these records are somehow exempted under the deliberative process privilege. As La. Rev. Stat. Ann. 44:5(D)(3) makes clear, as a requestor, I am entitled, post-decision, to any and all  “advice, opinions, deliberations, or recommendations made for the purpose of assisting the governor in the usual course of duties and business of his office.” Under the common law principle of “deliberative process,” only records pertaining to an ongoing pre-decisional issue are exempt from disclosure.

By failing to produce even a single e-mail responsive to this request, your office is suggesting either that Gov. Jindal is either openly and actively violating the public records law or, alternately, the governor is somehow, absurdly, still in the process of deliberating issues resolved several years ago— records that are, therefore, no longer legally entitled to any exemption and should be considered historic and subject to disclosure.

Mr. Enright, your response implicitly suggests that neither Gov. Jindal nor any member of his staff have ever made a decision on a single policy, budgetary, or legal issue during his entire two-term tenure as governor.

In Louisiana, a citizen’s right to access public records is considered fundamental, and the burden is on the government to provide a legal basis for each and every record denied. Unfortunately, your office has elected to prevent the disclosure of even a single record.

Gov. Jindal recently requested the full disclosure of all e-mails maintained by former Secretary of State Hillary Clinton, presumably under the belief that those e-mails would enhance accountability and transparency and better inform the public.

Gov. Jindal’s unwillingness to disclose even a single e-mail, under the pretense of deliberative process, stifles the fundamental rights of Louisiana citizens and starkly contradicts the law and his own repeated pledge to implement a “gold standard” of ethics reform.

If your office continues to be unwilling to comply with existing law, please advise me at your earliest convenience so that I may have the opportunity to consult with legal counsel in a timely fashion.