I haven’t doctored the image here. This is from Bill Cassidy’s Twitter feed. Four hours after inviting supporters to a rally with Senator Marco Rubio, Cassidy claimed that Mary Landrieu “voted against stopping executive amnesty.” It was, literally, his very next tweet, and his campaign spent the next several hours recycling this argument on social media, even uploading a 15 second commercial featuring the Congressman himself.

There are few glaring problems here, and I don’t blame you if you can’t pick up on them immediately. First and perhaps most obviously, the Senate never voted on “executive amnesty.” If he thinks Congress votes on “executive actions,” he needs to go back to sixth grade civics. Moreover, a temporary halt on mass deportations of undocumented immigrants who have lived and worked in the United States for more than five years isn’t amnesty, no matter how hard conservatives try to redefine the word. Cassidy knows this, actually. Here’s what he told the Locke Meredith of the show Legal Lines only a year ago (bold mine): (transcript h/t FactCheck.org)

Meredith: Explain what else needs to take place if and when we clear the border hurdle?

And so some of the other principles that people discuss are that, ok, once you’ve secured the border, you create a pathway to citizenship where someone may pay a fine, would begin to pay taxes if they are not already doing so … potentially pay back taxes as well … and then they get in the back of the line in the legal process to work though. They don’t bump ahead, they go to the back. …

And you also expect folks to learn to speak English. You want them to integrate into our civic society, not remain without it. And so, those are the principles. Now, whether or not the final package will have that will really determine how much broad support it gets in Congress.

Meredith: Now one other issue that seems to be discussed or raised when you contemplate immigration is “amnesty.” Explain that to the folks, and where do you fall on that.

Cassidy: Well, amnesty, as some people… there are different definitions. But one definition of amnesty is that there’s no penalty to pay, that you immediately become a citizen and there’s no obligation either to return or to do anything to make arrears to make up for what you have not previously paid. I’m opposed to amnesty. That is wrong.

You need to have a process where if somebody comes in, then if those working principles are what are adhered to, that would not be amnesty.

But these semantic gymnastics are not what is truly egregious about Cassidy’s blatantly cynical distortion of the facts.

You see, when Cassidy claims that Mary Landrieu “voted against stopping executive amnesty,” what he really means is that Landrieu, along with 67 other Senators, voted in favor of the Comprehensive Immigration Reform Bill.

Guess who else voted for that bill? I’ll give you a hint: He was a member of the so-called “Gang of Eight.” Remember them?

No, it wasn’t John McCain, though he supported the legislation and has campaigned for Cassidy. And it wasn’t Lindsay Graham, who co-authored the bill and worked tirelessly to ensure its passage. After the bill passed, Graham told Politico (bold mine), “I consider this an astounding success. You could ratify a treaty or override a veto. This is as good as it gets in the Senate.”

Who else could it be?

It was, in fact, another one of its authors, none other than Senator Marco Rubio of Florida. Quoting again from Politico (bold mine):

Before the final vote, the legislation’s chief authors took turns defending the bill and reflecting on the hard-fought path toward reform. Sen. Dick Durbin (D-Ill.) spoke of the ups and down of his 12-year fight on behalf of undocumented immigrants brought to the United States as children. And Rubio detailed the journey of his parents as they emigrated from Cuba.

“Here in America, generations of unfulfilled dreams will finally come to pass,” Rubio said on the Senate floor. “That’s why I support this reform.”

Remember, this legislation is the very same thing that Cassidy is attacking Landrieu for supporting, and tomorrow, he will be campaigning with one of the bill’s most prominent supporters and co-authors. “[I]nstead of saying Landrieu ‘represents Barack Obama’ on the immigration issue,” FactCheck.org reported, “the Cassidy ad could just as easily have said her vote ‘represents’ Graham or Rubio.”

Late last night, Cassidy launched this “petition” on his website: And this on his Facebook (again linking Landrieu’s support for a bill co-authored by Marco Rubio to the fabricated claim of “executive amnesty”): 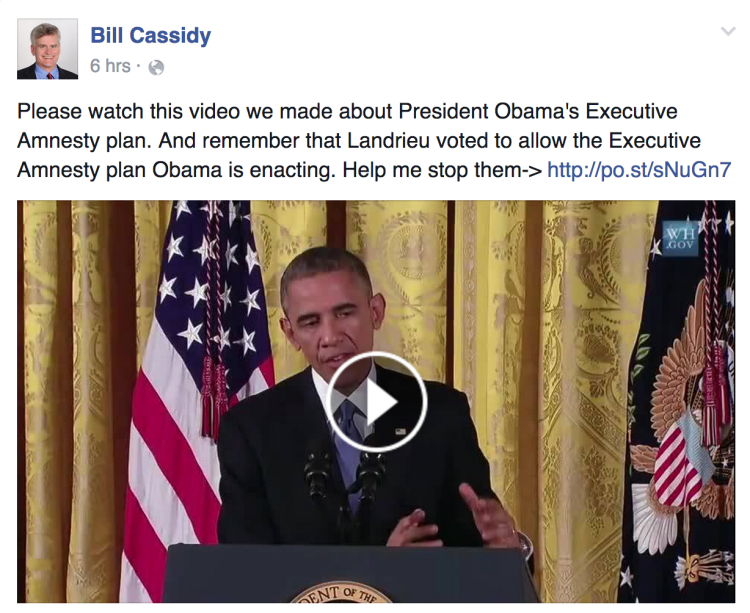 You’d think that Marco Rubio may be having second thoughts about campaigning for a man who has so brazenly attacked and mischaracterized a bill he likely still considers his most important accomplishment, but apparently, Louisiana voters aren’t the only ones that Bill Cassidy is playing for a fool.