On September 25, 2014, at 9:26 in the morning, hours before State District Judge Edward Rubin’s historic decision striking down Louisiana’s ban against same-sex marriage would become official, the Louisiana Department of Health and Hospitals sent out a deceptive and misleading memorandum to all of the state’s Clerks of Court. The DHH, under the imprimatur of Governor Bobby Jindal, told Clerks in all 64 parishes that Judge Rubin’s decision had nothing to do with legalizing same-sex marriage and everything to do with a couple in Lafayette seeking an intrafamily adoption of their own child. 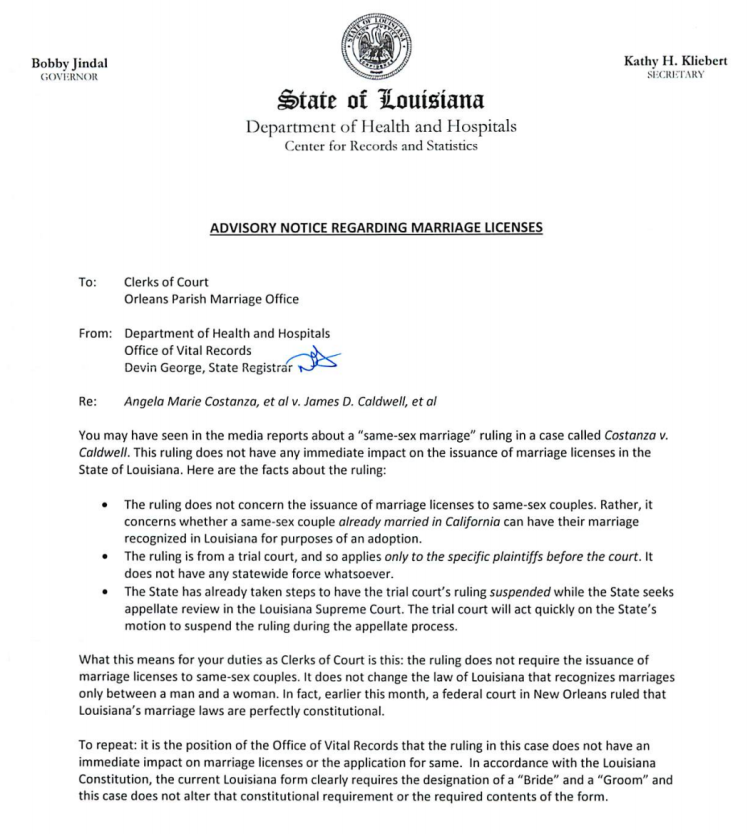 Let’s get a few things clarified and corrected right now:

1) While it is true that the case involved a lesbian couple who had gotten legally married in California and now sought an intrafamily adoption of their own 10-year-old son in Louisiana, it manifestly, clearly, obviously concerned the issuance of marriage licenses in Louisiana, at least licenses granted in Acadia, Vermilion, and Lafayette parishes. Judge Rubin struck down Louisiana’s same-sex marriage ban as unconstitutional. It may have begun as an adoption case, but it ended as a marriage case.

2) Rulings from trial courts don’t always exclusively effect or apply to the specific case at bar. In this case, the Judge struck down laws that affect thousands of gay and lesbian Louisiana citizens, not merely this one couple.

3) At the time in which this memorandum was issued, the judge’s ruling had not yet been suspended, which meant that for at least three hours on September 25th, licenses for same-sex marriage could have been granted in three parishes: Acadia, Vermilion, and Lafayette.

According to the DHH, the memorandum was drafted by Devin George, the State Registrar of Vital Records. As his social media account publicly discloses, Mr. George is a fan of “Forum for Equality,” one of the state’s oldest and most prominent LGBT advocacy organizations and a party to the recent case decided by Federal District Judge Martin Feldman; George is also listed as a member of the Louisiana Stonewall Democrats, the state’s largest political organization for LGBT citizens. I don’t know Mr. George, but, considering his political persuasions and his alliances with same-sex marriage organzations, I had a very difficult time believing that he would actually have written this particular memorandum. So, I asked a spokesperson from the DHH for clarification; she was kind, gracious, and in so many words, let me know how she stood on the subject, adhering impressively to an old adage by Uncle Earl, “Don’t write anything you can phone. Don’t phone anything you can talk. Don’t talk anything you can whisper. Don’t whisper anything you can smile. Don’t smile anything you can nod. Don’t nod anything you can wink.” Suffice it to say, I give her the benefit of the doubt, but I was still confused why the Jindal Administration sent out a deceptive memorandum signed by a man who, presumably, supports marriage equality.

“Devin wrote it,” she said, “but the lawyers looked over it.” With all due respect to Mr. George, I am going to assume that the lawyer, Kyle Duncan, who was specifically hired to work on this case, wrote the memorandum, and Mr. George merely signed his initials.

“I’m guessing they added the talking points?” I asked.

On Wednesday, I’ll be publishing a longer piece about this on The Independent Monthly, but for now, I thought it was important to point  this out: Your taxpayer dollars working to confuse, distort, and lie about a historical decision in order to improperly advise and deceive Clerks in the affected parishes so that they wouldn’t issue a single same-sex marriage license before the State was able to finish its motion for a suspensive appeal. Make no mistake: On Thursday afternoon, gay and lesbian couples in Louisiana could have gotten married, and the only reason that they weren’t able to is because the Jindal Administration lied about the decision and its implications to the Clerks who are charged with issuing those licenses.