Because of Louisiana Ethics Administration’s tortuous and uneven interpretation of campaign finance disclosure laws, it is possible that the public may never know who, exactly, is funding the controversial campaign to incorporate a large swath of East Baton Rouge Parish. But because of the impressive sleuthing by journalist Tom Aswell, we now know that the spokesman for the campaign, Lionel Rainey III, through his company LR3, received a no-bid contract for more than $770,000 from the Louisiana Department of Economic Development, a contract that, according to Aswell, appears to be duplicative of services that could already be provided by another state agency and that seems to be conveniently structured around state law. Quoting from Aswell’s bombshell report (bold mine):

When asked about the no-bid contract, LED responded by pointing out that contracts for social services may be awarded “without the necessity of competitive bidding or competitive negotiation,” provided the director of the Office of Contractual Review determines that certain conditions apply, one of which is that the total contract amount is less than $250,000 per 12-month period.

At the same time, LED’s response acknowledged that service requirements “shall not be artificially divided so as to exempt contracts from the (RFP) process.”

And that’s where things get a bit dicey.

LR3’s contract certainly appears to be “artificially divided” in order to circumvent the competitive negotiation process. It’s important to note: If this contract was, in fact, awarded without a competitive Request for Proposal process, it is likely no one else could have known to even apply for this work; it was just handed out.

For months, Mr. Rainey has served as the face of a campaign that, if successful, would result in the creation of the fifth largest city in the State of Louisiana, a city that, ostensibly, would be named St. George. I may catch some grief for using the word “secession” in my headline, but I think it’s a fair and accurate description: If Mr. Rainey’s campaign is successful, it would drain as much as $53 million a year in revenue from the City of Baton Rouge.

Tom Aswell’s report made me wonder whether anyone else associated with the St. George campaign has benefited substantially from government contracts. It didn’t take me long to find an answer to that question, and frankly, I am surprised no one else has mentioned this before.

Joshua L. Hoffpauir is listed as the registered agent and as an officer of the Committee for the Incorporation of St. George LLC. 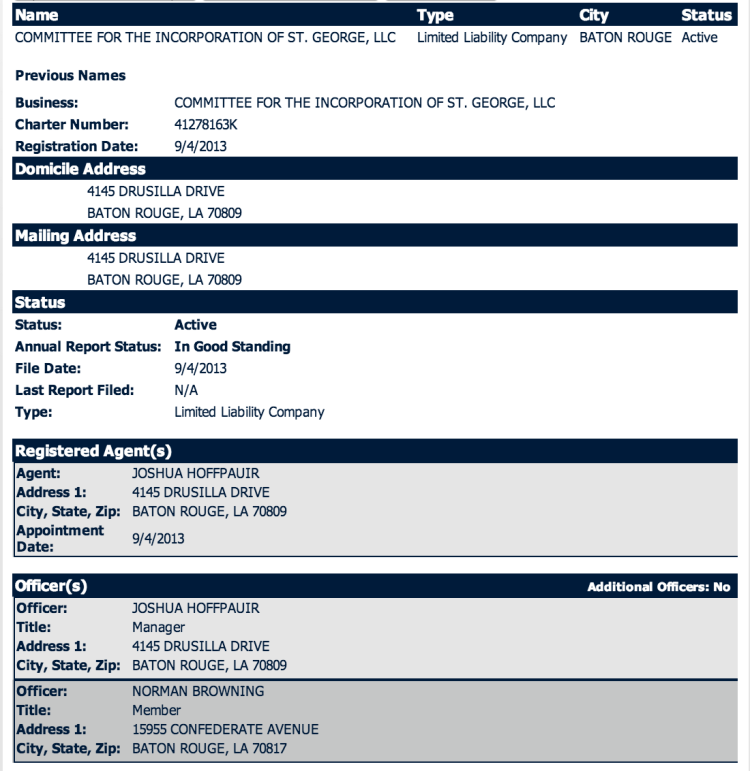 Mr. Hoffpauir is an architect and the owner of Hoffpauir Studio. Although he claims that the St. George campaign is his first real foray into politics, both the State’s database on contracts (in which his name appears more than a dozen times) and Mr. Hoffpauir’s own website reveal that his firm specializes in government projects, including, most notably, community master planning. Indeed, his website quotes a glowing recommendation from the Mayor of Eunice, Louisiana, praising his company for their award-winning work on the Eunice City Lake project.

To be clear, there is no evidence to suggest that Mr. Hoffpauir, unlike his colleague Mr. Rainey, received contracts for work that somehow wasn’t subject to the state’s laws on competitive negotiation process. What is clear, however, is that his company has also made a fortune from state, parish, district, agency, and municipal contracts.

From their page on government and civic architecture:

And here’s a capture of their portfolio on master planning:

And it looks like professional work. That, to me, is not their real problem.

The problem is two-fold: First, it is difficult to take seriously a claim that the government has neglected you and your community when you, personally have made a fortune from the government, and second, it is impossible to discount the massive architectural and planning projects that would be created if and when St. George incorporates. This isn’t merely about building a couple of new fire stations; it’s about planning and designing an entirely new city. If you’re leading a campaign to create a new city and you’re an architect and an urban planner, this is your dream job.

St. George proponents claim this is primarily about building a new school system. As luck would have it, Mr. Hoffpauir specializes in civic, government, and educational architecture.

Go figure! We can assume they already have.