Yesterday, I wrote about the ways in which Governor Bobby Jindal and Louisiana Superintendent of Education John White have attempted to dupe the public and national Congressional Republican leaders on the realities and the success of Louisiana’s controversial school voucher program. Almost immediately after the Department of Justice filed a motion seeking to suspend the program in certain school districts still under federal desegregation orders, Governor Jindal accused officials in the Justice Department and the Obama administration of conspiring to prevent African-American children from accessing a “better education.” As I pointed out yesterday, the simple truth is that Jindal’s school voucher program is actually comprised, almost entirely, of unaccountable and unregulated private schools that perform significantly worse than their counterparts in the public school system, and the notion that this program somehow provides opportunities for a “better education” is nothing more than dishonest propaganda. Setting aside the merits of the Department of Justice’s motion, there are several other issues that warrant attention. 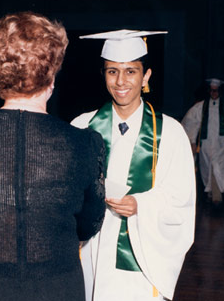 During the last few years, Governor Jindal has repeatedly and routinely championed policies that are disproportionately harmful to minorities, the poor, and the working class. He’s reallocated grants for things like grocery stores in the inner-city to help subsidize multinational corporations. He’s proposed raising Louisiana’s sales tax (already the third-highest in the country) by more than four points, in order to eliminate a state income tax, a plan that would have straddled the very poorest people in Louisiana with an enormous burden in order to further enrich the most wealthy. And for months, Jindal has prevented Louisiana from accessing the billions of dollars to which it is entitled in order to expand Medicaid coverage, ensuring that nearly 400,000 people continue to be locked out.

I’m not trying to channel Kanye West here, so I’ll just put it this way: Actions speak louder than words.

32% of Louisiana citizens are African-Americans.

Guess how many African-Americans are members of Bobby Jindal’s cabinet?

Keep in mind: A few weeks ago, during the fiftieth anniversary of the March on Washington, Jindal penned an editorial for Politico about the importance of diversity in American public life, and now, suddenly, he’s suggesting that his voucher program is almost entirely concerned with providing African-American students with “better opportunities.”

So, how many African-Americans are on Jindal’s cabinet?

And to be fair, I was being purposely misleading about Jindal’s column on diversity. He actually called for “an end to race,” and seemed to be arguing that Americans should, like he has done, sublimate our own unique cultural, ethnic, and religious identities in order to become more like Jindal’s own approximation of the “American” identity: Christian conservatives who love apple pie, grew up on the “Brady Bunch,” and had their mouths washed out with soap whenever they said a bad word. When Jindal argues against the use of terms like “Asian-American” or “African-American” or “Mexican-American,” as if they somehow undermine diversity, one can’t also help but wonder how Jindal feels about being called an “Indian-American,” whether he’s offended because he truly believes the term “hyphenates” his nationality, “otherizing” him, or if it’s because he’s always struggled at personally reconciling his desire to become thoroughly acculturated and accepted as generically, prototypically “American” with the traditions and the religion of his immigrant parents.

I know this may seem dismissive, but that’s absolutely not my intention.  Governor Jindal is a well-known public figure and elected official who wrote about these issues in a national publication and who, only a couple of weeks later, is now arguing that the President of the United States and the Attorney General of the United States are deliberately attempting to prevent African-American children from accessing a “better education.” Governor Jindal’s personal understanding of race and ethnicity and his own polices related to equality and diversity are directly relevant to this discussion. I didn’t make them relevant; he did.

When I look at America, I see a country that increasingly has lost its way in terms of morality. As a Christian, as I look at American culture over the past half century, I don’t like a lot of what I see. Divorce is through the roof, pornography is everywhere, sexual predators are on the loose and on the Internet, our abortion rate is higher than almost every First World country, vulgarity and profanity are mainstream and commonplace. In general, our culture has become coarser, and I regret that.

Seriously, when Bobby Jindal looks “at American culture over the past half century,” he sees divorce, pornography, sexual predators, abortion, vulgarity, and profanity. Keep in mind: Bobby Jindal is the twice-elected Governor of Louisiana, a state that has been ravaged by natural disasters, enormous failures by the federal government, the nation’s largest environmental catastrophe, a coastline that is being eroded as a direct result of corporate negligence, widespread poverty, a struggling education system, hundreds of thousands of people who cannot access health care, and a persistent and pervasive problem with racial discrimination and hatred.

… And, it’s worth repeating, when Jindal looks back on the last fifty years, he thinks of pornography, twerking, and people dropping the occasional F-bomb. Apparently, his brief experience on Bourbon Street a few years ago scarred him for life.

If Bobby Jindal truly valued diversity and equal opportunities, in a state with the second-highest per-capita population of African-Americans in the country, then these values should be sufficiently reflected in his hiring practices, in his cabinet, and in his appointments to powerful boards and commissions.

It’d also be a lot easier to believe Jindal really does care about education if he was honest and if he put his money where his mouth is. The truth is Bobby Jindal has done more damage to public and higher education in Louisiana than any governor in Louisiana history, and over the course of the last five years, he’s cut more money from higher education, per capita, than any governor in the nation. He signed a law that makes our public school science education the laughingstock of the world. He attacked our teachers unions, not because they yield undue influence and not because they have effectuated bad policy (quite the opposite, actually), but because they’re “unions,” easy scapegoats in a conservative, right-to-work state dominated by the outsized influence and an almost masochistic subservience to multinational oil and gas companies.

Louisiana’s public education system wasn’t struggling because of systemic poverty, and the failures of inner-city schools had nothing to do with a higher concentration of minorities, communities, who, until recently, were institutionally prevented from attending the wealthier, newer,  and more successful public schools in white suburbia. Never mind all of that. No, the problem, as Jindal would have us believe, was the teachers unions, the thousands of qualified and credentialed public servants who make less than $40,000 a year with minimal benefits; it was their insistence on meaningful job protection, their stubborn opposition against using the standardized test scores of their students as the primary barometer of their performance. How dare they, those teachers, insist that they know more about teaching simply because they have years of experience in the classroom and degrees and certifications in education, and how dare they organize collectively.

Again, this is why it’s almost impossible to believe that Bobby Jindal and John White actually care about improving educational opportunities for African-Americans. Because their policies have almost nothing to do with improving education; it’s about marketing a perverse political philosophy, siphoning away tens of millions of dollars every year from the robust public institutions that, as a result of their demographics and tax base, need this funding the most and providing taxpayer dollars, instead, to a parallel system of wholly unaccountable and unregulated religious schools.

As I mentioned yesterday, Bobby Jindal and John White aren’t even attempting to sell this scam to poor white kids in poor majority white schools in the country, and they’re not recruiting the state’s best private and most competitive private schools. No, instead, more than 93% of school vouchers are being given to African-Americans, almost entirely from inner-city neighborhoods (neighborhoods, it’s worth noting, where the public schools are the most important civic assets and institutions). Under the pretense of “choice,” we are effectively defunding our most vulnerable inner-city schools in order to enrich right-wing churches, profiteering ideologues, and schools under significant financial strain (that is, schools that need the voucher students because without the additional stream of revenue, they could go bankrupt). And again (it’s worth reemphasizing), we’re marketing these schools to African-American parents and children, and we’re pretending as if this is “empowering.” I’m not suggesting that the voucher schools are universally bad; I’m saying: It’s close. And if you have any doubt over why the Department of Justice is dedicating their time and resources to this or how this program undermines desegregation, consider this: The voucher program is disproportionately placing African-American students in underfunded, completely unaccountable, and completely unregulated schools, and in so doing, it is ensuring, in many districts, that public schools become even more segregated.

On a final note: I suspect that during the next several weeks, as this case crawls its way to trial, Governor Jindal and Superintendent White will focus a lot of their attention on the requirement that all private schools, not just voucher schools, are obligated to publicly advertise in local media that they do not discriminate on the basis of race. It’s perfunctory paperwork, and most schools use the same exact wording. And some of these schools attempt to justify race-neutrality by disclosing evidence that they hire African-American school bus drivers for special events, disclosures that demonstrate a fundamental misunderstanding of the law, I suspect there are many more egregious disclosures. But more importantly, dozens of these schools actively discriminate against the disabled, and they explicitly reserve the right to discriminate against gays, lesbians, and kids who belong to different religions.

To be sure, I don’t, for a second, believe Bobby Jindal or John White intended the voucher program to be almost entirely comprised of African-American students, and I doubt they ever anticipated that the participating schools would be significantly worse than those in the public school system. To them, this was an always amazing idea, in principle, something that could get the national conservative media and establishment to rally behind them. But they made one critical error: They just assumed, reflexively, that private schools in Louisiana were better, without ever really doing their homework. Indeed, there’s likely a good explanation as to why 91.7% of voucher schools weren’t able to be sufficiently audited: Ignorance is bliss.