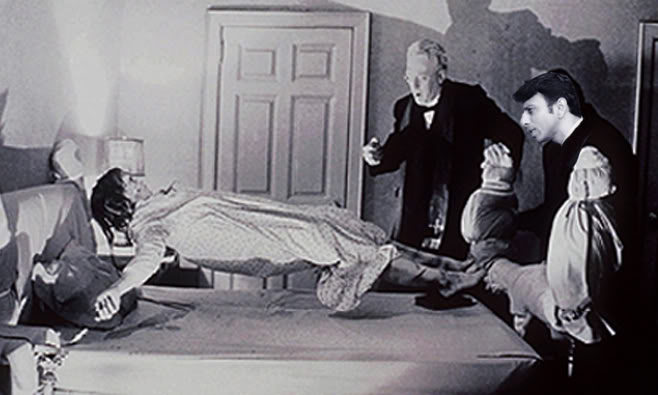 When he was 24 years old, Bobby Jindal became the Secretary of the Louisiana Department of Health and Hospitals. In introducing him to the public, Governor-elect Mike Foster called Jindal a “genius.” Quoting from The Advocate (who thought, at the time, that Jindal’s legal name was Piyush Robert):

Gov.-elect Mike Foster said his new health secretary is “a genius” who has an unbelievable knowledge of health care and the “practical quality” of being able to deal with people. Foster said Piyush Robert “Bobby” Jindal is a young man, which some may think is a negative. But Foster said he is not worried about Jindal’s ability to run the Department of Health and Hospitals. “I am not a gambler. I am a very conservative person,” Foster said.

In December 1994, Bobby Jindal published an essay in the New Oxford Review titled “Physical Dimensions of Spiritual Warfare.” In the essay, Jindal claims that he participated in an exorcism as a college student and that the exorcism cured his friend “Susan” of cancer.

Thirteen months after Jindal’s essay was published, he was given the most important and powerful health care job in the State of Louisiana. At the time, no one said anything about young “Piyush Robert” and his understanding of modern medicine. Over a decade later, when he ran for Governor for the second time, the Louisiana Democratic Party released this unforgivably ridiculous television commercial accusing Jindal of being anti-Protestant, an ad which likely sealed the election for Jindal:

The Louisiana Democratic Party seemed to recognize that Jindal’s exorcism essay and his other writings on religion were controversial and absurd, but they had absolutely no idea what to do with them. And for whatever reason, they were terrified to tell voters what needed to be said: Bobby Jindal believes exorcisms can cure cancer. After all, he argued this, forcefully, in an international Catholic journal only a year before becoming the Secretary of the Department of Health and Hospitals. And it was dumb and insulting to anyone who has ever been diagnosed or known someone diagnosed with cancer, and it should have disqualified Jindal from both the DHH and from the Governor’s Office.

Quoting from Jindal’s essay (blocked behind a paywall) (bold mine):

Susan’s mother had once worshipped and offered a sacrifice at a pagan altar in the Far East for her husband’s health, though he had been healed, she had been warned not to repeat such practices, but had returned to that same altar in the Far East upon hearing of Susan’s illness. The UCF staff member dis­missed Susan’s affliction as a psychological disorder, precipitated by the semester’s stress, and advised her to seek professional help. Susan, who had experienced visions and other related phenomena as a child, thought her intense flirting with guys and straying away from God had led to this punishment.

When the operation occurred, the surgeons found no traces of cancerous cells. Susan claimed she had felt healed after the group prayer and can remem­ber the sensation of being “purified”; she saw her physical and spiritual afflictions as being related. The physician’s improbable explanation that the biopsy may have removed all the cancerous tissue is no less far-fetched.

Susan still struggles with the theological implica­tions of her experience. Though she recalls nothing of what happened that night, the tidbits she hears from others terrify her. Can a Christian be “possessed”? What precipitated her attack and will it happen again? Susan has talked with ministers, charismatic pastors, and others. It took months before we could reestablish our friendship and she was able to trust me. Though I do not have the answers she desperately seeks, I have provided comfort and support whenever Susan has fears or doubts. With holy water and blessed crucifixes, I have even given her physical protection from the de­mons that have only once reappeared, and then for a mere moment.

Although Jindal may now suggest that this was just something silly or “goofy” that he wrote as a kid, the truth is: He was a grown adult with two college degrees when he published the essay, and in the years since its publication, he’s never walked back a single sentence. Bizarrely and somewhat brazenly, Bobby Jindal has asserted himself as a conservative leader in health care policy.  Last year, Jindal issued this statement to The Times-Picayune (bold mine):

Jindal has not talked publicly about the details of the story. When asked if the governor still believes he witnessed an exorcism or has any concerns about the article’s impact on his chances of becoming the vice presidential nominee, a Jindal spokeswoman didn’t answer the questions directly.

Instead, she released a statement from Jindal saying, “I wrote a lot of stuff in high school and college. While other kids were out partying, I was reading and writing. I’m sure some of that stuff is goofy. I just hope they don’t review my grade school work.”

Again, the exorcism essay was published years after Jindal completed high school and college, in an international journal.

Fourteen years after he published this essay, Bobby Jindal signed a law, the Louisiana Science Education Act (or LSEA), that allows public schools to teach, as science, that the universe is less than 6,000 years old. He and the law’s defenders argue that they’re promoting “critical thinking.” A year after signing the LSEA, Jindal provided millions of taxpayer dollars to private church schools that teach, among other things, the Loch Ness Monster is real and the KKK cared about “morals.”

The truth is, they’re just attempting to codify their own ignorance, with the hope that they can intimidate anyone who disputes them as being religiously intolerant.

I’m not intolerant against anyone, particularly the religious; I have a degree in Religious Studies, and I was born into a family of preachers and priests and church choir directors and lay leaders. But I am insulted by those who use religion to excuse their own idiocy and myopia. I’m insulted by people who think religion cures cancer, as if illness and disease are merely a test of faith. Frankly, I think they’re con-artists, hucksters who prey on and profit off of the most vulnerable among us.

Why does any of this matter? Because Bobby Jindal is currently refusing to implement the Affordable Care Act. Because Bobby Jindal is single-handedly preventing hundreds of thousands of Louisiana citizens from accessing health insurance that, in almost any other state, they could receive. Because Bobby Jindal is selling off Louisiana’s public hospitals to his highest campaign contributors. Because Bobby Jindal would rather spend $1.2 million in public funds for a rigged Congressional election (and over $120,000 a year to pay the Congressman who will be replaced) than spend a dime expanding critically-needed services for the developmentally and physically disabled. Because on the same day Bobby Jindal brags about how privatization facilitated the opening of a gynecology office in Lafayette, it was announced that the State of Louisiana will spend $15 million to help private companies take over services from Huey P. Long Charity Hospital in Pineville. Because the man who served as his Secretary of Health and Hospitals is now being investigated for spearheading a mega-million dollar and allegedly fraudulent contract with his former employer.

Because our health care services and our hospitals are controlled by a man who hates science, a man who fundamentally misunderstands modern medicine, a man who has lived in the rarefied air of elitists for so long that he now seems oxygen-deprived. Because this, ultimately, is about destroying Louisiana’s once-robust system of public care, sacrificing the public good on the altar of private profiteers, to borrow Jindal’s language. And because, literally, these policies bankrupt the poor in order to further enrich the wealthy.

I fully understand that, in Louisiana, there is a risk in criticizing Governor Jindal for his “religious beliefs” about exorcisms and creationism. Somehow, I could be painted as “intolerant.” For whatever reason, there seems to be an awful lot of otherwise well-intentioned people who refuse to champion basic science and who vaingloriously perceive any criticism about their willful ignorance as “religious persecution.” And maybe it’s easier to be an ignorant martyr than an informed critic.

But I also know this: Exorcisms and holy water and blessed crucifixes don’t cure cancer, and Bobby Jindal is not and has never been an expert in health care policy or balancing a budget. He may be quite adept at giving away public assets and services to his friends, and that’s likely because he’s never been able to understand his own job or who he actually works for.

For nearly six years, he’s been under the mistaken impression that Louisiana voters elected him to be a partisan political celebrity. And maybe it was hubris or maybe it was just stupidity, a refusal to understand the facts, but either way, six years after he was first elected, Bobby Jindal went from being the most popular Governor in the country to the least popular. In fact, Bobby Jindal is now the least popular Governor in Louisiana history.

He may dispute this characterization, because, after all, polls involve numbers and math and science.