Last Sunday, The Times-Picayune published a letter I wrote to them under the headline “Voucher Program Is Entirely Lacking In Accountability.”

1. First, I’m sincerely appreciative to the editorial board of The Times-Picayune for allowing me to contribute to this important discussion, and I’m impressed by their willingness to publish a letter that not only criticized Louisiana Superintendent John White but also their own news reporting on the issue. Although The Times-Picayune‘s integrity and commitment have been beleaguered and beset by a series of bizarre and unfortunate corporate decisions, I consider it a high honor to be selected for publication, and for a Louisiana native, there’s nothing like seeing your own words printed in Louisiana’s paper of record. 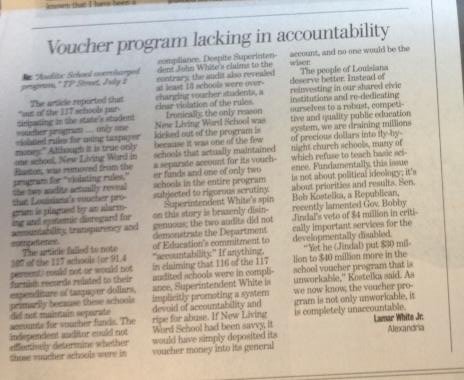 2. I had initially submitted a 570 word letter and was asked to parse it down to 350 words; I was able to cut it down to 391 words, and thankfully, they were okay with that. But that said, I had to leave a few things out.

3. For example, I cut an entire paragraph concerning Superintendent John White’s leaked e-mails after Barbara Leader’s initial reports about New Living Word School appeared in The News Star, e-mails that revealed Superintendent White’s efforts to “muddy up a narrative” (his words) in order to convince the public that the Department of Education was taking oversight seriously. To me, Superintendent White’s “brazenly disingenuous” spin on the audits of voucher schools are just the latest example of a larger pattern of purposeful deception. Superintendent White appears to be much more focused on presenting a public relations campaign to support a specific political agenda than in faithfully and diligently representing the facts.

4. The conservative criticism seems to be that liberal opponents of voucher schools have unfairly singled out one school, New Living Word, as a scapegoat. As the audits reveal, however, New Living Word was actually singled out because it was one of the only schools in the entire program that complied with the “rules.” There’s no way to know how rampant and extensive the abuses are, because New Living Word, unlike the vast majority of schools in the program, actually tracked the ways in which it spent taxpayer dollars.

5. I firmly believe the audits prove that Louisiana’s voucher program violates the Establishment Clause of the United States Constitution. It directly violates the Supreme Court’s decision in Zelman v. Simmons-Harris by providing taxpayer dollars directly to religious schools, instead of providing funds to parents and students. By refusing to disclose how these funds are dispersed, these schools cannot effectively or substantially prove or demonstrate that taxpayer dollars are being used, exclusively, for non-sectarian purposes, and as a result, the program fails all three parts of the Lemon Test.