In the upcoming weeks, the Louisiana State Senate Education Committee will, once again, consider a bill to repeal the misnamed Louisiana Science Education Act. Last year, during the committee hearing, State Senator Mike Walsworth, a Republican from Ouachita Parish, asked a series of questions that- months later- made him the star of a viral video on YouTube.

And not to brag, but I was actually the first blogger to post this e.coli video, only a few hours after Zack Kopplin had uploaded it onto YouTube. Unfortunately for me, I buried the lede. There were so many absurd things said during last year’s committee meeting, so many different things going on, all at once, I didn’t know where to begin.

So I included the videos in an overwrought personal essay, instead of where they belonged– headlining a post detailing and documenting the willful ignorance of lawmakers who are responsible for making informed decisions on education policy. Thankfully, though, in an interview with Zack on the popular website i09, the Walsworth video clip was given prominent attention and within 24 hours, it and a few others went viral, racking up nearly 700,000 views. Suffice it to say, the video of Walsworth’s questioning a high school biology teacher on the merits of evolution is, perhaps, the most viral video in the history of the legislature.

Shreveport rap star Hurricane Chris will likely be disappointed to learn that his stirring rendition of the song “Halle Barry” isn’t even close. Walsworth’s video has already received twice as many hits as Hurricane Chris’s historic song. For some comic and musical relief:

And as fun and irreverent and (frankly) bizarre as Hurricane Chris’s performance was, I seriously doubt he would have anticipated that his viral video would soon be surpassed by a series of tired questions about science education. Hurricane Chris wasn’t the rock star. State Senator Mike Walsworth was, and by the of end the day, he likely could never appreciate why, months after this testimony had wrapped up, it was suddenly being ridiculed by people all over the world.

But here is the most interesting thing, and it had not been reported in Louisiana. A few months ago, in response to these viral videos and during an interview with Fox News 26 in Houston, Senator Walsworth said, “From the blogs. ‘Hey, you probably don’t know anything about science.’ And they’re probably right.,” he said. “But I was just asking questions. And that’s what debate is supposed to be about. I mean, I’m not a scientist.”

To recap: Mike Walsworth supports the thinly-disguised religious education bill, the Louisiana Science Education Act and then admits to Fox News Houston that those who oppose him are “probably right” and then, finally, concedes that he is not actually a scientist. He continues:

Do I believe that God created the heavens and the earth? Absolutely, I do,” Walsworth told FOX 26 News.

That is, without question, Walsworth’s personal religious beliefs on the origin and the development of the Universe; it’s not science, and it is not even a substitute for science.

They continue: “But the Louisiana legislator points out a paragraph in the law expressly forbidding the promotion of any religious doctrine or “discrimination for or against religion or non-religion.”Senator Walsworth says the purpose of the law was to give teachers and school administrators more flexibility in how they present concepts like evolution, global warming and human cloning. And the lawmaker says the controversy over the Louisiana Science Education Act is overblown.”

I vehemently disagree. This law was conceived with one central goal in mind: To promote Christian creationism as a competing scientific theory. But it’s not a scientific theory; it’s a religious myth. And eventually, it will be held Unconstitutional, despite its efforts to cleverly, serpentine work around the law.

Regardless of how milquetoast the language may seem, the undeniable truth is that by ensuring “flexibility” for teachers to critique valid science, they can, by definition, teach religion as science.

The Act may sparkle and smell like a new car, but if you ride it around the block a few times, parts will begin to fail and fall out; the headlights will break, and within weeks, you’ll realize you bought a lemon. Great on paper. But on the road, a death trap.

It’s worth noting: I don’t know who Mike Walsworth is. Maybe he is a nice man. I know many politicians who regret a vote or two. But he faces a daunting task this cycle: He admits that the scientists were right and that he knows nothing about science education.

Finally, he writes, “The Department of Education, as of – I just talked to them last week. Not one parental complaint. Not one.” 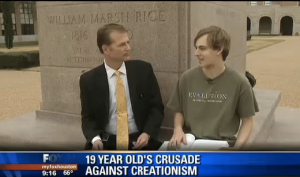 We have more than 70,000 signatures officially complaining, including thousands of Louisiana parents. The repeal effort has been endorsed by 78 Nobel Laureate scientists, dozens and dozens of ministers, priests, and clergy, the largest Science Education groups in the world, Hollywood celebrity comedians like Jason Alexander, Patton Oswalt, Bill Maher, and countless others.

When Gene Mills and Mike Walsworth and company attempt to suggest that no one has complained to anyone, I suggest they come prepared with their checkbooks. Coping the thousands of responses and then tens of thousands of pages will be labor intensive.