On Tuesday, March 19, the Louisiana State Supreme Court will finally consider whether Bobby Jindal’s school vouchers scheme violates the Louisiana State Constitution. Things aren’t shaping up too well for Team Jindal. Surprisingly (at least to me), District Court Judge Tim Kelley ruled that Jindal’s vouchers scheme was unconstitutional, because it relied entirely on funding through the State’s Minimum Foundation Program, which is specifically established to fund public schools in Louisiana.

Despite the fact that Judge Kelly is a well-known conservative who is married to Jindal’s former Commissioner of Administration, Angelle Davis, and who recently received $1,000 in campaign contributions from Jimmy Faircloth, the attorney representing Jindal in the dispute, Kelley issued a remarkably straightforward ruling and thorough analysis of Jindal’s voucher program, carefully assuring some so-called “reformers” that the plan itself may hold up under constitutional scrutiny – at least, abstractly– but that its funding through the MFP was grossly and blatantly illegal and unconstitutional.

Thankfully, for those who care and believe in improving the public system, the facts and the law remain on our side.

Still, regardless, it is impossible to predict how the Court will rule.

But one thing is for sure:

John White is closing applications for school vouchers only four days before the Louisiana State Supreme Court determines their legality and constitutionality. Superintendent White, as he had the previous year, could have provided a more expansive deadline and application process. The wholly, entirely political decision to end applications four days prior to a Louisiana State Supreme Court hearing and subsequent ruling– let’s be honest– is nothing more than crass political theater, needlessly and cynically exploiting dozens of parents and children, a bald-faced effort to “pre-victimize” a class of  applicants by hurriedly qualifying and “investing” them to participate in a program that likely violates the Louisiana State Constitution. The Department of Education’s decision, ostensibly acting under the orders of Superintendent John White, isn’t merely gamesmanship; it borders  on negligence and coercion.

“But your honor,” they’re scripting themselves to say, “What can we do about the thousands of students?” The most honest answer, in the event that Supreme Court agrees with Judge Kelley is: Blame yourself, and blame John White and his allies.

But here is the real story, a story that, in many ways, is more important than the Louisiana Supreme Court’s pending decision, considering we’re already hearing rumors about Superintendent White’s “contingency plans,” which would either seek to reformulate the MFP program OR would beg already cash-strapped local districts to pony up money for private school vouchers. Make no mistake: Even if he is defeated, Superintendent John White and Governor Jindal will work harder than they ever have in their entire lives to find money for schools. No, not public schools, of course. They need money to subsidize and float unaccountable, largely unaccredited private schools. Quoting from Judge Kelley’s ruling:

“While the Court does not dispute the serious nature of these proceedings nor the impact and potential effects on Louisiana’s educational systems, vital public dollars raised and allocated for public schools through the MFP cannot be lawfully diverted to nonpublic schools or entities,” Kelley wrote in his ruling. 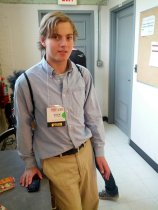 Last summer, Zack Kopplin identified twenty voucher schools, some of whom were set to receive hundreds of thousands of taxpayer dollars every year, that advanced and promoted a series of offensive, racist, and, most commonly, anti-scientific propaganda; these schools were slated to receive millions in tax dollars to help them further indoctrinate children, a clear and unequivocal example of using government money for the sole purpose of establishing religion.

Zack had exposed this story nationally, identifying those 20 creationists voucher schools in Louisiana and then hundreds more across the country. In fairness to Superintendent John White and his spokesman Nicholas Bolt, both men promised a thorough investigation into the curriculum standards of voucher schools.

In December, in response to a question about creationist voucher schools, Bolt told Louisiana Public Broadcasting, “So there’s a couple of different plans of actions around this, this idea. First of all, every school will currently undergo a curriculum review as they do right now to be approved by the State Board. You know, our main concern now is how those students do on the science tests. So, yeah, they will all be tested… and if the curriculum, if the science curriculum is truly bad… then that will be reflected in the science test and in the review of the curriculum as well.”

This may sound all well and good, but it’s complete and total nonsense. Neither Superintendent White nor anyone in his Department actually thoroughly vet the schools they pre-qualify for taxpayer subsidization.By now, that should be abundantly clear: White approved sending hundreds of thousands of dollars a year to a school operated by a man who calls himself a “prophet” of God; he approved even more money to a school in Ruston that doesn’t even have adequate facilities, and millions of taxpayer dollars to teach students that scientists are sinful men, that the Lochness Monster is a living dinosaur that disproves evolution, that the KKK was, at one point, a force for moral good, that hippies were dirty Satanists, and the list goes on.

John White and his team at the Department of Education, in an effort to demonstrate how the public school system is failing Louisiana school children, are diverting millions in funding every year from public schools in order to enrich some of the worst schools in the United States– religious zealots posing as educators, fly-by-night operators who don’t even have the necessary infrastructure, and bigoted and religiously intolerant “church schools” that specialize in utilizing thoroughly debunked textbooks and materials to stifle dissent, schools that seek to enrich themselves with taxpayer dollars while reserving their right to expel any student on the basis of their perceived sexual orientation or religion.

And despite the international criticism Superintendent White and Governor Jindal have received, largely because of Zack’s exhaustive and insightful research about the ways in which the voucher program subsidized the teaching of creationism in science classrooms, and despite the weakly-worded public statements by people like Nicholas Bolt, not a single creationist voucher school has been removed from qualifying.

In fact, during the last year, Superintendent John White, Governor Bobby Jindal, and their hand-picked team at the Louisiana Department of Education have qualified at least SIX ADDITIONAL creationist voucher schools for the up-coming school year:

22. Alfred Booker, Jr. Academy, which teaches math like this: “Creation was completed in six (6) days and commemorated on the seventh. Elisha was able to multiply the widow’s oil and Peter was encouraged to forgive ‘seventy times seven.'” And science like this: “By Design is a creation based curriculum showing the craftsmanship of God in the creation of earth. Created to link Science and Faith, By Design shows students how Science actually backs what the Bible says. When properly taught, Science reflects back to the infinite power of God and allows room for inquisitive minds to grow and develop without sacrificing principle.”

24. Family Community Church School, which has its own detailed laundry list.

And last but not least: