No, no, for those of you who get the reference, he didn’t actually say that, but yesterday, our own Zack Kopplin was the subject of an extraordinary frontpage article on the website io9, one of the nation’s most important and influential science and technology websites. The article, titled “How 19-year old Zack Kopplin is making life hell for Louisiana creationists,” was an exhaustively detailed account of how an English paper Zack wrote as a 14-year-old public high school student inspired and suddenly catapulted him into a nationally and internationally-known student activist.

As his friend and an unpaid publicist, this is the front page of yesterday’s website: 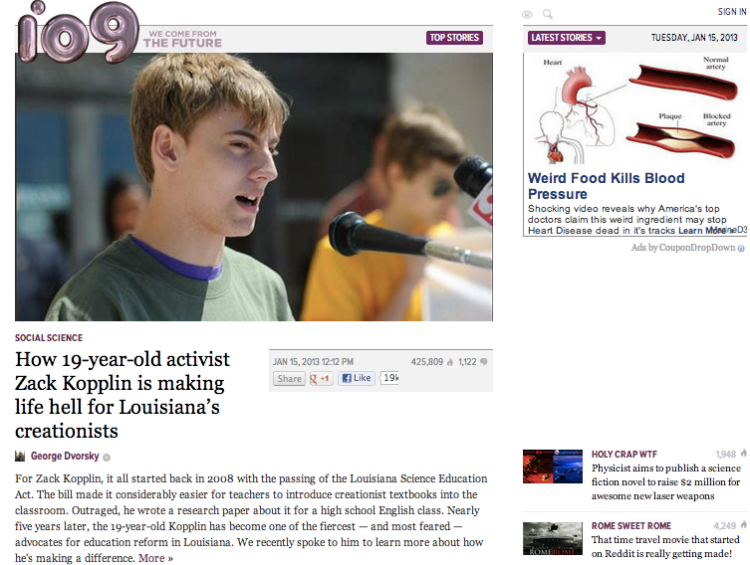 Check out the article. It is righteous, and for me, the best thing about it, other than Zack getting the national audience he will continue to demand and deserve, is how thoroughly and comically commentators responded to videos posted about State Senator Julie Quinn and State Senator Mike Walsworth, videos that are already going viral as a result:

Julie “All the Little Letters Behind Their Names” Quinn:

Senator Quinn made sure everyone knew, from the beginning, that she was unimpressed by all of those “little letters behind people’s names” and reminded everyone– at this point, the entire world, that she is an attorney (without any sense of self-deprecation or humility of the “little” JD she tugs behind her name).

But what Julie Quinn lacks in humility, State Senator Mike Walsworth makes up for it in stunning ignorance:

Keep your eye on the epic facepalm.