Less than two weeks ago, when Barack Obama took the stage in Chicago to accept his re-election as President of the United States, he spoke about a young girl in Ohio whose family nearly went bankrupt after she was diagnosed with leukemia:

And I saw just the other day, in Mentor, Ohio, where a father told the story of his 8-year-old daughter, whose long battle with leukemia nearly cost their family everything had it not been for health care reform passing just a few months before the insurance company was about to stop paying for her care.

I had an opportunity to not just talk to the father, but meet this incredible daughter of his.  And when he spoke to the crowd listening to that father’s story, every parent in that room had tears in their eyes, because we knew that little girl could be our own.

A few days later, on his HBO show “Real Time,” liberal comedian and provocateur Bill Maher argued that the 2012 election could be summed up in two words: “leukemia” and “stuff.” For many, Maher’s pithy analysis may seem flippant and overly simplistic, but as we’ve learned during the last two weeks and as was revealed by none other than Mitt Romney himself, there is a large contingency of Republicans who earnestly and sincerely believe that Democrats turned out to re-elect President Obama because they were essentially bribed. Even before the election was called, Bill O’Reilly was telling Fox News viewers that Obama voters had been seduced by the promise of “free stuff.” The next day, Rush Limbaugh compared President Obama to Santa Claus. And a few days ago, Mitt Romney, in a call to his donors, suggested that the only reason he didn’t win the election was because President Obama gave out “gifts” to African-Americans, Hispanics, college students, and young women.

We need to be honest with one another. For decades, even before Ronald Reagan railed against the myth of “welfare queens,” a small and incredibly well-funded segment of the Republican establishment has distorted and maligned the necessity of a functional federal government that has the capacity to provide services for the poor, the dispossessed, and the disabled; they’ve attempted to convince good and decent working-class families that their hard-earned tax dollars were being spent, nefariously, to fund the extravagant lifestyles of bottom-feeders. No doubt, government services and so-called “entitlements,” like disability, Social Security, Medicaid, and Medicare, have been fraudulently exploited and abused, but despite what critics may believe, these programs, for the most part, haven’t been defrauded by individual, rogue actors who lie about their income or invent their own disability; they’ve been compromised by wealthy corporations: HMOs, insurance companies, pharmaceutical companies, celebrity doctors, nursing homes, and, in some cases, religious institutions, sophisticated actors who have exploited sophisticated programs for massive financial gain.

Republicans and Democrats both like to promote the notion of “welfare to work.” Both parties agree, on a fundamental level, that in a free market capitalistic society, an economy in which only the strong survive, we must still maintain a safety net for those who are, by virtue of circumstances beyond their immediate control, shut out from competition. We all agree: Our country should provide services and care for the indigent and the disabled, not only because their barriers to entry are so high but also because it’s the humane, moral, and ethical way to collectively care for those who cannot independently care for themselves.

And we should also all agree: These programs, particularly welfare and disability, should aspire to empower people to become successful, self-sufficient, and productive. Unfortunately, however, that’s not how we’ve rigged the system. We have, instead, trapped people into cycles of dependency. I don’t know what the policy justification for this is, but I know, personally, that it’s destructive, counter-intuitive, and counter-productive.

If you’re a right-wing conservative or a rigidly ideological libertarian who doesn’t know or interact with anyone who lives with a disability, it may be convenient to imagine that government assistance programs are merely designed to provide a salary to an underclass of lazy moochers; you may even believe that you’re personally financing the livelihoods of those less fortunate, as if your taxes qualify as a charitable donation. For whatever reason, this false narrative gained traction in America: We lost sight of the people who were actually defrauding welfare, housing subsidies, Medicaid, and Medicare, and we began crafting punitive policies that re-victimized the very people we had intended to help.

Three weeks ago, I read about Ashley Volion, a 28-year-old woman from Louisiana who, like me, has lived with cerebral palsy for her entire life. But it would be unfair to compare my challenges to what Ashley has experienced: Ashley has endured much more. After reading her story, I posted something about her on my personal Facebook, and by pure coincidence, she wrote me an e-mail that very night. She didn’t know me; she never saw my Facebook post; she didn’t know that, like her, I also have lived with cerebral palsy for my entire life; she just knew I was a self-proclaimed progressive activist, and she simply wanted to share her story with anyone and everyone who would listen. 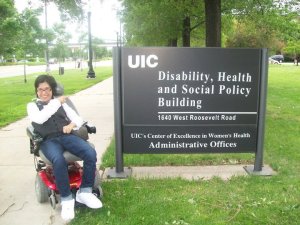 I was more than happy to listen.

And you should too.

Shortly after Ashley was accepted into the nation’s one and only ph.D program in Disability Studies, she learned that Governor Bobby Jindal’s administration would be opposing her request for extending her care services for graduate school. Because of her disability, Ashley requires round-the-clock personal care attendants; they work in eight-hour shifts, and they help her do things that we all take for granted. All told, her care services cost approximately $70,000 a year, which is a lot of money, but let’s put it into context: We spend more money every single year to accommodate a person on death row.

After Ashley’s request was denied, Governor Jindal’s administration allowed her the ability to appeal their decision in front of one of his own hand-selected administrative law judges. Ashley hired a lawyer, secured sworn testimony from her friends and colleagues, and told the court, under oath, that she would never relinquish her Louisiana residency, that she wanted to receive this education because she wanted to make a difference in Louisiana. The State argued, however, that Ashley’s request should be denied because it wasn’t “time-limited” (which is disingenuous, considering that her graduate school program, by definition, is time-limited), that they wouldn’t be able to ensure for her care (also disingenuous), and that there may be “licensing issues” (which is code language and something that could easily be resolved). Sure, the State is not “required” to provide services for one of its residents who enrolls in an out-of-state school, but it’s also not prohibited from doing such. Indeed, Louisiana Medicaid often grants funding for recipients who require specialized surgeries and treatments that are simply unavailable in Louisiana. I know this personally, because when I was a kid, Louisiana Medicaid covered some of my surgeries at Gillette Children’s Hospital in St. Paul, Minnesota, surgeries that no doctor in Louisiana had ever performed.

The DHH is essentially inventing policies and guidelines on an ad hoc basis; they’re making things up as they go.

You may wonder: Why didn’t Ashley just move to Illinois, declare residency there, and avail herself to the same services? I asked her the same questions, and she was unambiguous: First, she doesn’t want to become a resident of Illinois; her entire family lives and works in Louisiana, and as a disabled woman who is confined to a wheelchair, she wants to build her professional career with her family nearby. And second and most importantly, it’d be impossible for her to do that.

These programs have trapped her. She needs $70,000 in care every year, and the moment she relinquishes her Louisiana residency, she loses the guarantee of that care. As a student in another state, she can only legally become a resident after living there permanently for a solid year, and moreover, Louisiana, for all of its flaws, actually has a much better attendant care assistance program than almost every other state. Once she’s out of the Louisiana program, it could take her as much as ten years to become re-qualified.

So, some may ask, why doesn’t she just save up for graduate school? After all, a lot of people do that. If you’ve never known someone who is disabled like Ashley, the answer may surprise and depress you: Ashley is not allowed to save money. In order for her to qualify for $70,000 a year in personal attendant care services, she can’t maintain more than $2,000 in her checking or savings accounts, and she can’t make more than $24,000 a year. There’s no graduated or sliding scale; if she makes more or saves more, she’s cut off. And believe me, she would love to make more money, but she can’t enter the middle class. She’s only been given two options: Be poor and keep your life-sustaining care, or win the lottery. These programs have essentially ensured that, no matter how hard she tries, she will never be able to become independent.

Ashley is an adjunct professor in the Texas A&M system; she teaches online courses from her home in New Orleans. And we’re trapping her, this brilliant and vibrant young woman who just wants to advance her education.

Governor Jindal has been making the national rounds by talking about how his party needs to be nuanced and smart. He should begin with looking in the mirror.

Next: My Interview with Ashley Volion