Seven months ago, shortly after the death of conservative provocateur Andrew Breitbart, the brain trust that inherited his “media empire” announced they had “bombshell” footage of a young Barack Obama, footage they claimed would prove, once and for all, that President Obama was a radical racist. Sean Hannity and Fox News salivated, teasing the story for hours, promising an “exclusive” that would forever change the way Americans thought of the President.

And as it turned out, the story was nothing more than a recycled video that had aired on PBS in 2008 of Barack Obama, as a law school student, introducing one of his college professors at a rally protesting the lack of diversity among Harvard’s tenured law professors. It wasn’t a bombshell; it was a dud. Because the actual “bombshell” was not about what Obama said but about the nationally-renowned law professor he had introduced, the conservative activists and Breitbart heirs who had hailed the video as a damning indictment of Obama were suddenly forced to explain the nuances and the contours of critical race theory; almost immediately, they demonstrated their complete ignorance, reminiscent of when conservative pundits suddenly all became experts in liberation theology after Jeremiah Wright became a household name.

Yesterday, though, Sean Hannity and Fox News outdid themselves. During the mid-afternoon, Matt Drudge, with sirens blazing, announced Tucker Carlson and The Daily Caller were set to release another bombshell video of President Obama that would prove, once and for all, he was a radical racist. But if you wanted to see the video, you’d have to wait to watch Sean Hannity’s show on Fox News. It was, to quote Yogi Berra, “deja vu all over again.”

Once again, as it turned out, the video was recycled; the story was stale; this wasn’t news, and it most certainly wasn’t a bombshell. It was simply footage of a 2007 speech that then-Senator Obama delivered in front of a majority African-American audience at Hampton University in Virginia, a speech that had been covered and reported by numerous news outlets.

Three weeks ago, I heard former Education Secretary Bill Bennett tell an overwhelmingly white conservative audience at SMU that America was no longer a “racist country,” a statement that earned him a round of sustained applause. The most powerful example of this, he claimed, was the election of President Obama. Bennett, who spent the bulk of his remarks outlining his opposition to the President, gave lie to an insidious argument: That America has somehow entered a post-racial era because a man that he voted against and continues to vociferously and publicly oppose was elected to the highest office in the land. “I’m not racist. Some of my best friends are black” has become “We’re not racist. Our President is black.”

I am not, by any means, suggesting that I believe Bill Bennett is racist; I just think he’s fundamentally wrong: Racism is still alive and well in these United States, and it’s intellectually lazy and dishonest to suggest that President Obama’s election ushered in a post-racial era.

I watched Sean Hannity’s “bombshell” report yesterday on Fox News, and as a white guy who was born and raised in a majority African-American city and who attended and graduated from a majority African-American public high school, I’ve gotta say: As demonstrated by  their “exclusive” report on the five-year-old recording of President Obama at Hampton University, I don’t think there’s any question that Sean Hannity and Tucker Carlson are both racists, in the strictest sense of the term. And I grew up around white people who spat out the n-word in casual conversation; I know people who treat the Confederate flag with more reverence than the American flag, and I’ve even encountered a few people who were members of the Ku Klux Klan.

Let me explain: There is a difference between the backwoods, overt racism of the ignorant and uneducated and the insidious and subtle racism of the wealthy and educated elite. I’m not trying to excuse or diminish the festering hatred espoused by overt racists, but I strongly believe that subtle racism can actually be much more insidious and corrosive. Largely, this is because overt racism is so easily identifiable and recognizable, and although we are not yet a post-racial society, overt racists are, fortunately, more readily marginalized; they’re not mainstream.

Admittedly, I don’t watch much of Sean Hannity’s program; I understand that he talks for a living, and I’m sure that one could easily find examples of him talking highly and respectfully of African-Americans. Those examples wouldn’t change my mind, however. Yesterday, he and Tucker Carlson spent thirty minutes on primetime television arguing that Barack Obama was a racist, because in a five-year-old video, the President sounded more “black” than he usually does. This is what subtle racism looks like: It’s two wealthy, conservative white men warning America that the nation’s first African-American President once addressed a majority African-American audience in a “phony” “black” voice. They’re not really worried about Obama’s “affectation.” The story wasn’t about ensuring that people knew Obama “faked” sounding “black;” it was about reminding a white conservative audience of Obama’s blackness, his “Otherness.”

For twenty years, whenever Bill Clinton spoke in front of a majority African-American congregation, his oratorical skills were lauded, even by conservatives who resented his politics. He was praised for his ability to channel the cadence of a folksy, charismatic Southern preacher. Indeed, shortly after the Democratic National Convention, Chuck Schumer compared Clinton’s speech to a sermon in an African-American church.

From 2000-2008, the President of the United States was a man who was born in Connecticut, the son and grandson of one of the country’s most powerful and established families, a man who spent most of his childhood at elite New England boarding schools before graduating from Yale and then Harvard. Yet, somehow, George W. Bush always sounded like an east Texan wildcatter.

On a personal note, whenever I spend two or more hours around my hometown friends, I inevitably, almost instinctually, revert to a pronounced Louisiana drawl.

Fox News is now attempting to frame its “bombshell” exclusive video of Obama as a story about what he said; the story was actually about how he said it: He sounded like a black minister speaking in front of a gathering of black ministers. That was Fox’s story; that was what Sean Hannity and Tucker Carlson and others debated for over a half an hour. It wasn’t about what Obama had said but how he said it.

This is most amusing to me. Here’s the headline Fox News is currently running: 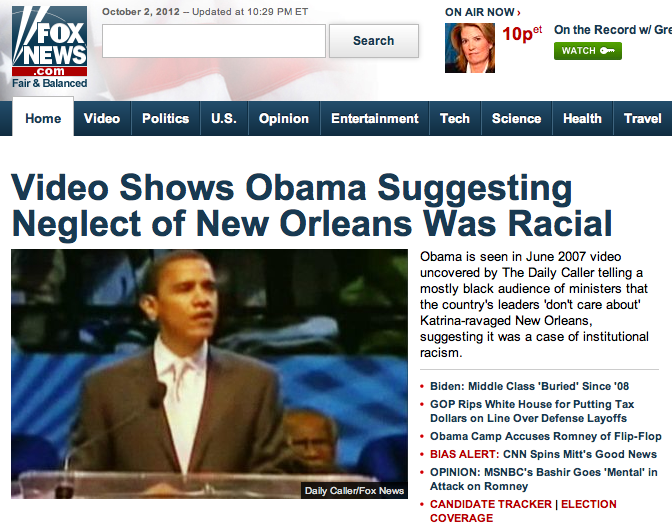 As the actual video proves, that’s not at all what Obama was suggesting. Quoting (bold mine):

“When 9/11 happened in New York City, they waived the Stafford Act. … And that was the right thing to do,” he tells the crowd at Hampton University in Virginia. “When Hurricane Andrew struck in Florida, people said, ‘Look at this devastation. We don’t expect you to come up with your own money. Here, here’s the money to rebuild. We’re not going wait for you to scratch it together, because you’re part of the American family.’ ”

Obama, echoing rapper Kanye West’s infamous anti-Bush remarks a couple years earlier, then argues that New Orleans was treated differently, suggesting the reason was that the city is mostly black.

He wasn’t channeling Kanye West; Obama didn’t say that New Orleans was being treated differently because “the city is mostly black.” Fox just made that up. (Just as they also made up the notion that Obama was “dog whistling” to black racists by suggesting that we should reinvest in urban infrastructure instead of building more highways to the suburbs; it’s called “smart growth,” and it’s not a racist conspiracy).

Frankly, as a Louisianan, I wish Obama had said what he said more forcefully and more frequently.

He was expressing what every single rationally-minded person in Louisiana already knew to be true: That the federal government’s response to Hurricane Katrina was an abysmal failure, that nearly two years after the storm, Louisiana’s recovery was plagued by bureaucratic red tape, that we should have immediately suspended certain provisions of the Stafford Act in order to provide relief to Louisiana in the same way we did for Florida after Hurricane Andrew and New York after September 11th, that Louisiana was not treated equitably. This is all irrefutably true, and I don’t have any patience for the cadre of Republican pundits and news outlets who seek to revise Louisiana history to tailor some sort of fantasy narrative about how an African-American politician criticizing the federal response to Katrina in front of a majority African-American response is somehow racist.

Again, this is the headline story on FoxNews.com, and it’s cringe-worthy.

At least one Louisiana-based blogger agrees with Fox’s angle. In a post titled “The 2007 ‘Ghetto Obama’ Speech,” Scott McKay (who completely misses the legitimate criticisms of Stafford Act exemptions) of The Hayride writes:

Furthermore, what’s with this assumption that everybody in New Orleans who was affected by Katrina was black? Lakeview, which was mostly white, was essentially cleared when the 17th Street Canal levee failed. And Metairie Club Gardens, perhaps the richest and whitest area in the whole city, took six feet of water. Those were million-dollar houses and they were ruined. Even today, not all of them have been rebuilt.

One can only hope that Fox News will take notice and immediately book Scott McKay for a series of national interviews. He can talk about how racist it is that “ghetto Obama” neglected to mention the plight of millionaires who haven’t yet rebuilt their million-dollar homes.