During the next few days, I will be revisiting the role of the Louisiana Family Forum. But before I get into the nitty-gritty details, I thought I’d have some fun.

Last Thursday, the Louisiana Family Forum hosted its annual Legislative Awards Banquet, where it gave 24 State Senators and 56 State Representatives a bronzed bust of Patrick Henry, a Founding Father, of course, the biological father of eighteen children from three different women (eleven from his second wife, who was half his age when they married), and a slave-owning, outspoken opponent of the United States Constitution. 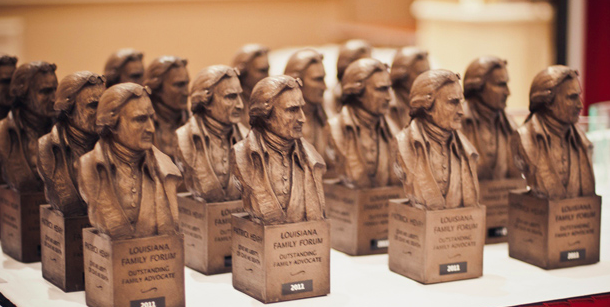 Apparently, for the Louisiana Family Forum, no other American better exemplifies freedom, liberty, and old-fashioned family values than Patrick Henry, who, in 1765, famously said, “Give me liberty, or give me death,” immediately after asking his slaves to clean the outhouse. Seriously, though, Henry’s entire quote is (bold mine), “Is life so dear, or peace so sweet, as to be purchased at the price of chains and slavery? Forbid it, Almighty God! I know not what course others may take; but as for me, Give me Liberty, or give me Death!”

To be sure, Patrick Henry wasn’t the only Founding Father who owned slaves, and after a friend sent him a book against the slave trade, he wrote back, suggesting that while he believed slavery was evil, abominable, rude, and barbarous, he sure enjoyed its conveniences. At least he was honest.

Again, yes, George Washington also owned slaves. Thomas Jefferson did too, and, like Patrick Henry, he also fathered a child with one of his slaves. Suffice it to say, you’d be hard-pressed to find anyone who would ever give out a family values award named after any of our Founding Fathers.

But there is a reason the Louisiana Family Forum seeks to redefine Patrick Henry as a paragon of good, old-fashioned family values, even if history suggests otherwise: Patrick Henry isn’t a hero of the radical religious right because he was a champion of traditional Christian families; he is their hero because he was one of America’s earliest, most eloquent, and most famous anti-federalists. He’s their hero because he hated taxes, hated the idea of a federal government, and distrusted the role of the President.

I have a suggestion for the Louisiana Family Forum: The award looks fancy enough. Who wouldn’t want the bust of an 18th century, wig-wearing white guy on their trophy case? You just need to change the name. After all, it’s disingenuous to suggest Patrick Henry was a family values guy. Instead, the plaque should read, “Destruction of Government Advocate.” And the best thing is: You wouldn’t have to change a single thing about your selection criteria.