On Tuesday, the Louisiana Democratic Party went on a Twitter offensive, sending out hundreds of tweets to local, state, and national media members, bloggers, students, parents, activists, and teachers about the astronomical cuts that Governor Jindal has made to Louisiana higher education since taking office in 2008.

In order to continue functioning, these schools have had to impose a 52.9% increase in tuition, which, in effect, amounts to the largest tax increase on college students and their families in Louisiana history. Prior to Jindal, tuition accounted for 35% of higher education funding, with the remaining 65% funded through state appropriations. Today, those numbers are reversed.

The Jindal administration, it seems, was caught off-guard by the Louisiana Democratic Party’s #tweetthecuts campaign, with one spokesperson arguing that higher education spending had only decreased by 6% and another suggesting that spending had actually increased by 0.3%. Both numbers, however, rely on offsetting Jindal’s cuts with the simultaneous massive increases in tuition and other fees, increases that, in my opinion, expose the fundamental hypocrisy and flaw of Jindal’s definition and understanding of government.

No one discounts the ways in which the economic recession, spurred and facilitated by unregulated markets and unfunded tax breaks to the wealthiest Americans, have affected Louisiana’s bottom line, but instead of seriously tackling the state’s revenue, Governor Jindal, aided and abetted by the Louisiana legislature, has used the budgetary crisis as an opportunity to justify crippling cuts to and the privatization of government programs and services. These are not temporary, stop-gap measures; they’re a reflection of Jindal’s long-term vision and ideology. Indeed, Governor Jindal is not seeking to find ways to restore state revenues to pre-recession levels. Quite the opposite, actually. He’s actively, purposely, and publicly attempting to defund government even more dramatically.

And this may all make for a series of great talking points, red meat, for the national audience that he so desperately seeks to court: “Reducing the size of government” is, after all, a favorite mantra of the Republican Party. But what does it actually mean? To be sure, both political parties campaign on the idea of eliminating “waste, fraud, and abuse,” and both political parties are guilty of contributing to “waste, fraud, and abuse.” Still, there are obvious differences between the two parties, and the economic recession has underscored those differences starkly.

In Louisiana, under Governor Jindal, there is no desire to ensure the state government also recovers from the recession. When the pension funds for public employees dried up, conservative leaders and right-wing media blamed those employees, without ever acknowledging or even recognizing that those funds became imperiled because they were allowed, even encouraged, to invest in risky private investments, all in the name of deregulation. After the recession hit and state employees suddenly had their pensions drained, the conservative impulse was not to say, “Well, we probably should have ensured that public employees tied their pensions to less volatile investments;” instead, these employees and their pensions somehow became examples of the gluttony of government. And maybe that is true, but it’s the gluttony of a government that sought to direct tens if not hundreds of millions of public dollars into these incredibly risky private markets. These employees who have seen their pensions evaporate are victims of politicians who colluded with banking lobbyists, yet now, they’re being painted as a prime example of a bloated bureaucracy. It’s not only unfair; it’s also not true. Jindal’s plans for pension reform are already being targeted as unconstitutional.

State Republican leaders and their conservative-leaning constituents have become almost Pavlovian in their dismissal of taxes. Recently, Governor Jindal refused to renew a small tax on rental cars, a tax that is paid almost entirely by tourists and out-of-staters, not because it was placing an undue burden on anyone but because he simply couldn’t stomach renewing a tax, any tax, regardless of its merits or who it benefits.

Last Sunday, on Meet the Press, Jindal, in defending his refusal to participate in Obamacare’s insurance exchange program for Medicaid, reminded host David Gregory that “federal dollars” are still our dollars, a self-evident point that Jindal sought to use as principled excuse for his partisan intransigence. But again, it also underscores Jindal’s fundamental hypocrisy: If this money is “our” money, then, by refusing it, Jindal is, by his own definition, giving away our money to other states. He did it with unemployment insurance in the American Reinvestment and Recovery Act. He did it with broadband money. He did it with $300 million for high-speed rail. And now, he plans to do it again with much-needed money for healthcare. Ironically, a day after his appearance on Meet the Press, during which he bragged about Louisiana Medicaid, it was announced that Jindal would have to cut an additional $859 million from the program, all federal dollars upon which his administration had been counting.

The truth is: Governor Jindal is not rejecting our money because he knows it will lead to disaster. He’s rejecting our money because he, personally, wants to fashion himself as ideologically pure and consistently opposed to the President of the United States. This is not about the future of Louisiana; it’s about the future of Bobby Jindal, which is why, currently, Governor Jindal, acting as a surrogate for vacationing Mitt Romney, is following around President Obama on a bus tour in rural Ohio.

Remember the deep water oil drilling moratorium? After the largest environmental disaster in American history, the Obama administration put a temporary halt on new deep water, off-shore drilling permits, a move that Governor Jindal, his fellow Republicans, and conservative economists said would be catastrophic for the Louisiana economy. Tens of thousands of jobs would be lost forever, they warned. Lafayette would be particularly devastated. Notwithstanding the fact that a moratorium was the responsible thing to do (government regulators failed to perform and had an enormous backlog of inspections), Governor Jindal’s dire predictions now seem, even more, like petty politics, the position of a man who cares more about kowtowing to the demands of the oil and gas industry than ensuring that these rigs were properly inspected and regulated. Today, Governor Jindal brags about Louisiana’s relatively “low” unemployment rate. Today, Lafayette is growing jobs faster than almost anywhere else in the nation. If Louisiana’s oil and gas industry lost jobs as a result of the moratorium, those losses were ephemeral, and thankfully, the doomsday scenario presaged by Jindal simply never came about.

And today, for better or worse, President Obama’s administration has increased off-shore oil and gas exploration more than President Bush did during his entire tenure. Domestic oil production is up 12% under President Obama, and for the first time in years, the United States exports more oil than it imports.

Governor Jindal was so willing to overlook the real and obvious need for the federal government to retool its oversight of off-shore drilling, in the immediate aftermath of an epically disastrous oil spill, he parroted the almost absurd talking points of the most profitable industry in the world. If you need a clear cut example of his understanding of government, then look no further than how he handled the BP disaster: Posing for photo opps in “secret” locations in order to disingenuously lambast the President for not taking action in clean-up (even though Jindal’s own response was much more dilatory), and then, siding with industry lobbyists and stoking fears among Louisianans who worried about their jobs. 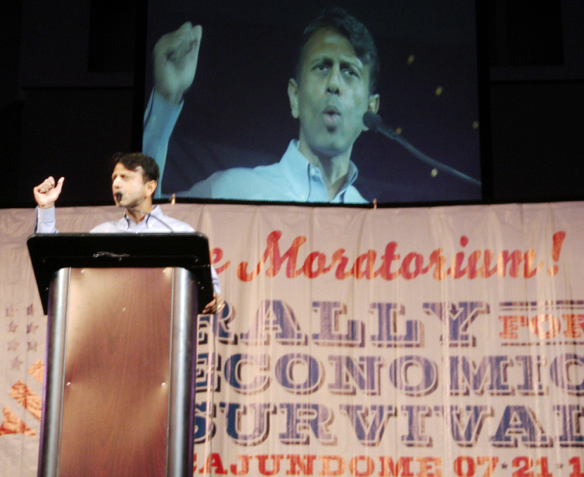 Oh, and there’s one more thing: While the rest of the world focused on real, effective, proven solutions, Governor Jindal went “all in” on one of the most ridiculous projects in Louisiana history, Jindal’s so-called “Bermdoggle,” forty miles of artificially created sand berms, which proved to be a massive waste of taxpayer dollars, precious time, and energy. This was the “signature” piece of Jindal’s response; he fought with the White House over it; he championed it on national television. And while it may have set him apart and made him appear as if he possessed some unique solution that no one in the federal government had ever seriously considered, Jindal’s sand berms were, again, a bermdoggle. If the stakes hadn’t been so high, it’d seem comical. The berms were a failure from the onset; they stopped very little oil; they were built one day, and then, the next day, they’d evaporate in front of us.

In Jindal’s Louisiana, government does not ensure for the viability of its skills-based workforce through investing in community colleges; instead, it doubles tuition for community colleges while giving millions and millions away in tax breaks and incentives to wealthy corporations.

In Jindal’s Louisiana, if government collects money from someone who rents a car while visiting New Orleans, it’s a tax and is, therefore, morally wrong. But if it slashes funding to our universities and requires that working class students and families pay twice as much in tuition, well, sorry, revenue is down; what else do you expect Governor Jindal to do?

In Jindal’s Louisiana, tens of millions of dollars in tax breaks and state funding for television, movie, and video game production companies is both cultural and economic development, but it’s impossible to find $100,000 to fund French language education, even if the French government is offering an $800,000 match.

In Jindal’s Louisiana, small business development means pulling away funding from dozens of local start-up projects in order to give it all away to one of the richest corporations in the world.

In Jindal’s Louisiana, environmental protections for all take a backseat to the short-term profit motives of the few.

In Jindal’s Louisiana, there will be no such thing as an unfunded mandate, because nothing will be adequately funded to begin with.

In Jindal’s Louisiana, it’s entirely consistent to take tens and tens of millions of dollars away from our public primary and secondary schools and then give that money to untested, unknown, and unaccountable private and religious schools, all while arguing that this massive injection of our money somehow allows these private schools the opportunity to compete in the “free market.” Redirecting tens of millions of public dollars to help prop up and fund struggling parochial schools does not exemplify free market capitalism; it exemplifies a type of pernicious and corrupt socialism: Depleting our public institutions in order to enrich a small  handful of radically-right preachers, preachers who intend to use our taxpayer dollars in order to finance their own major expansions, all while conveniently harbored under laws that protect religious organizations and 501c3s and all protected by the fact that their schools’s performances will never be subjected to the very same tests that we use to grade our public schools.

This is Jindal’s Louisiana, and if Mitt Romney grants him his wish, it could also become our America.