Four years ago, I, along with two of my friends, traveled to Denver for the Democratic National Convention. The three of us were selected as the “official” bloggers for the Louisiana delegation. We were given full access to the Louisiana Democratic Party’s events, floor passes at the convention, and were treated more like delegates than members of the media. It was an incredible, eye-opening experience, and I will always be grateful to have had a front row seat.

My buddy Daniel was wise. He recorded a video with the express intention of proving our attendance (though we both eventually relocated to the floor):

At the time, Chris Whittington, a Baton Rouge attorney, served as the Chairman of the Party. Mr. Whittington was notably absent from many of the party’s events that week. Indeed, even though I stayed at the host hotel and got to know nearly every single delegate, the first and only time I saw Mr. Whittington was on the floor of the convention. I am, literally, sitting right under the microphone here (and thankfully, off camera):

I couldn’t help but feel embarrassed for my state. They hadn’t counted their delegates until the very last moment. Only minutes before the delegation was to appear on national television, they were still scrambling. Considering the circumstances, the word “disorganized”is an understatement. And when the cameras finally panned over, instead of allowing our Senior United States Senator, Mary Landrieu, the opportunity to make the announcement (something that nearly every other delegation had done), the mic went to a delegate (who called Louisiana the home of “shrimp”) and Chairman Whittington, who slurred his words so badly that the DNC asked for a clarification.

It was deeply troubling to me and, without question, to many others as well. This was the biggest stage the Louisiana Democratic Party could possibly be on, and they fumbled it, big time. But there is another reason I was both embarrassed and troubled: During the previous three or four days, I had met and spoken with exceptionally dedicated and fiercely intelligent Louisiana Democrats. The problem, as I saw it, was that these folks weren’t in charge. The party had smart, organized leaders, but they weren’t in a position to lead. For too long, the word “party” was taken literally.

Mr. Whittington resigned from his post only two years later, and former Congressman Buddy Leach, who had served previously as Chairman of the party, took back his old position. I do not question Mr. Leach’s commitment to the Louisiana Democratic Party. He’s an accomplished man with an impressive resume and an equally impressive family. (In fairness, to both men’s credit, they employed two exceptional communications directors, Scott Jordan and Kevin Franck, who would be an asset to any organization).

But frankly, I believe if the Louisiana Democratic Party wants to be competitive, then it must adapt. They cannot afford to return to the sloppy and fractious leadership offered by those who supported Mr. Whittington, and they cannot make any headway under the leadership of Mr. Leach, a man who provided former Governor Edwin Edwards a job right after he was released from prison. In return, Governor Edwards publicly suggested that Louisiana Democrats rebrand themselves under a different name. Thanks but no thanks. 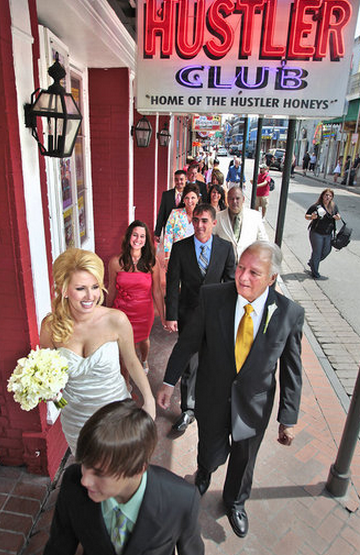 (Credit: Chris Granger of The Times-Picayune)

Governor Edwards has a fascinating story, and, without question, he’s remained a magnetic personality throughout his career. But by definition, magnetism requires polarization. Like him or loathe him, Governor Edwards has done more to undermine the credibility and the reputation of the Louisiana Democratic Party than any other single person in Louisiana history. When he emerged from prison after eight years, he married a Republican conservative more than fifty years younger than him (an Alexandria woman who met him in prison after reading Leo Honeycutt’s biography), took a “consultant” job with a company owned by the Chairman of the Louisiana Democratic Party, and went on a media tour during which he suggested the Democratic Party rebrand itself to appeal to conservative-minded centrists.

With all due respect to the former Governor (who has refused multiple requests for interviews), the Louisiana Democratic Party is no longer your party.

Senator Peterson’s election as Chairwoman represents a major, fundamental shift in the Louisiana Democratic Party’s power structure and a huge victory for like-minded Louisiana progressives. I have no doubt that in Louisiana, progressives are the sleeping giant, the silent majority, and the future. We are a state of big and bold ideas, a state that once imagined every man as a king. We may not be as radical today, and, thankfully, we’re also not naive: Still, we know that government can build bridges and roadways and schools, that competent government yields returns for all of us.

And without question, Senator Peterson and Director Handwerk also know this: Governor Jindal and the Louisiana Republican Party may be good at running campaigns, but Mr. Jindal and his party have been colossal failures at governing. Mr. Jindal inherited a billion dollar surplus and immediately squandered it, recklessly repealing a tax plan that had been approved through a statewide referendum only a few years prior and costing the state billions and billions in future lost revenue, all the while providing enormous tax incentives to mega-wealthy corporations.

Look, this isn’t fiction; this isn’t hyperbole; this is the truth: Jindal is the most financially reckless governor in contemporary Louisiana history.  If Louisiana were a Fortune 500 company and Jindal was the CEO, he would have been fired years ago; the man cannot manage a balance sheet. But because he’s a Governor who has bankrupted the State and pilfered revenues, depleted services, and privatized programs and assets in order to prop up private-sector balance sheets, he can somehow, incredibly, present himself as a steward of fiscal conservatism. Though, truthfully, Governor Jindal and the Louisiana Republican Party don’t need to run on their abysmal economic record: They can just run on social issues. Louisiana voters are that stupid, the logic apparently goes: You can squander a huge surplus by giving all of the money away to your well-heeled corporate campaign contributors as long as the real issues are creationism in the schools, gay marriage, school bullying, and sex offenders on Facebook, his top legislative priorities. To be sure, privatizing public education and selling off prisons (in order to eliminate the need to pay for employee benefits) are an afterthought.

Under the leadership of Senator Peterson and folks like Stephen Handwerk, it’ll be a new day for the Louisiana Democratic Party. Sorry Governor Edwards and apologies to the old guard: Life is hard; you have to change.

PS: Thanks to the vapid idiot who runs the website The Hayride for inspiring this post. You and your website contribute nothing of substance to our political discourse, nothing. You are corrosive, and often, your website is nothing more than thinly-veiled bigotry. 1951 may be comfortable, but most of us prefer to live in 2012.

Update: Correction: The Hayride did not publish the article titled “Not a Drop of Slave Blood;” LouisianaConservative.com did. I apologize to my readers for the mistake.