Yesterday night, on my way home from school, like a dutiful son, I called my mother to check up on things. “Oh, by the way,” I said, “I’ve been exchanging tweets with Andrew Breitbart.”

“Who is Andrew Breitbart?”

“You remember him. He’s the guy who upstaged the Anthony Weiner press conference,” I said. “He broke that story, actually.”

“Oh, of course. But why is he talking to you?” Good question.

“Well,” I explained, “I wrote something on Twitter about his voice sounding like a love child between Owen Wilson and Dr. Evil, and he posted it on his Twitter. I think he thought it was funny. It was good-natured.”

“Just make sure it stays good-natured,” she said.

I don’t know if Breitbart actually thought my one-off joke was really funny. As I now know, he relished in retweeting criticisms of him. Today, one of my close friends told me that Breitbart had also retweeted two of his comments, neither of which are suitable for publication here. But regardless, I knew I was on his radar, and I had a couple of questions I wanted to ask him about his protege James O’Keefe. Earlier in the night, David Shuster of CurrentTV mistakenly said that O’Keefe was a convicted felon, a statement he corrected on Twitter. 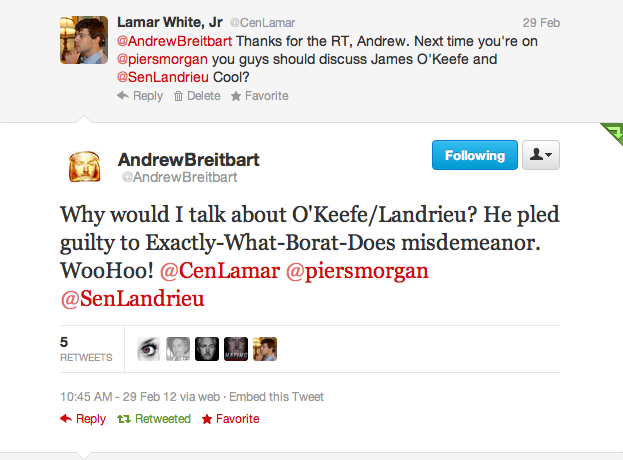 To me, it was a strange analogy, almost an admission of sorts that O’Keefe, who Breitbart had once touted as the future of journalism (in so many words), was like a comedian posing as a journalist.

So, last night, I posed a question to him, and he responded almost immediately, in rapid-fire:

The crazy, incredible thing about the Internet and social media is the way in which it democratizes the free and open exchange of ideas. Like him or loathe him, Andrew Breitbart understood this; he embraced it, as unwieldy as he sometimes was. I don’t believe his analogy was apt or helpful to James O’Keefe, and I imagine that he understood this as well, which is likely why he spent a fair amount of time yesterday clarifying and expounding on it. But, at the very least, it was provocative, which was one of Breitbart’s signature traits.

As it turns out, his last “public” battle was with me, and his last public statement was to me. He apologized for calling me a “putz,” sort of. In fairness to him, he conditionally apologized, provided I hadn’t been “intentionally disingenuous” with him when I called his attention to an article in The Atlantic that said O’Keefe had pled guilty to a misdemeanor “with the intent to commit a felony.” And I wasn’t being intentionally disingenuous; The Atlantic had apparently misreported the story.

I immediately accepted his apology, and despite what The Daily Beast reported, I am certain he received my acceptance. Earlier in the night, I told him, “For what it’s worth, I begrudgingly respect that you’ve responded (to me).” I did. I thought it was cool.

This afternoon, I told ABC News that I wear Andrew Breitbart’s “putz” insult as a “badge of honor.” I wasn’t being facetious or flippant.

Less than an hour after he wrote me back, Andrew Breitbart died of a heart attack. He was only 43 years old– way, way too young.

When the news broke, only seven hours after he had written me back, my phone lit up. Today, I’ve been flooded with media requests, tweets, and Facebook comments, and on a personal level, it has been somewhat surreal. I’d never met Andrew Breitbart; I was just the last person mentioned in an epic opus of tweets (and incidentally, that does not make me “lucky,” as some of his fans have suggested).

I’m well-aware of what Andrew Breitbart gleefully said immediately after Ted Kennedy died. It wasn’t right; it was intended to hurt people who were grieving.

But during the last twelve hours, I’ve received messages from people all over the country congratulating me for “killing” Andrew Breitbart. It sickens me. It’s poisonous, vapid, hypocritical, dehumanizing hyperbole, and it’s not funny at all. None of it is. He was 43-years-old. He leaves behind a wife and four small children. I know a thing or two about this; my father died when he was only 41, leaving behind three teenagers.

I’ve also received messages from people all over the country alleging that Andrew Breitbart’s death was caused by liberals, even some suggesting the President himself ordered an assassination. Again, this is poisonous, vapid, hypocritical, dehumanizing hyperbole.

My heart aches for Andrew Breitbart’s family. But, for them, if there is some solace to be found, maybe it is this: That up until the hour before he passed, he was engaging, prodding, criticizing, and exchanging ideas and banter about the things in which he believed, with people, like me, who were more than happy to be in a debate with him. (And who still will hold fast to their own beliefs).

I hate to be a footnote, but I am proud to be called a “putz” by one of Tulane’s most famous graduates. Sometimes, an insult can be an honor.