A few months ago, researchers at the University of Georgia published a provocative study that suggested that homophobic men were actually “most aroused” by gay male pornography. I won’t get into the details, but if you care to learn more about the methodology and the science behind the study, you can read about it on the website Psychology Today.

At the very least, it should make most rational people think about the true nature of homophobia, whether it is really an earnest and moralistic belief in the sanctity and superiority of Levitical law or whether the “phobia” is actually a fear of succumbing to an apparently shameful desire, a desire that could potentially place someone out of the mainstream of their community.

Nearly every week, we read stories about so-called “family values” conservative leaders being exposed for living a double-life as a closeted homosexual. Recently, there was the State Senator in Indiana, who campaigned against gay rights and then attempted to pay an 18-year-old boy to have sex with him in an Indianapolis hotel room. Last month, an anti-gay Alabama politician admitted he had donated his own sperm to a lesbian couple in New Zealand. And lest we forget about Larry Craig, Mark Foley, and the megachurch pastors Eddie Long and Ted Haggard. “The lady (in this case, the men),” to quote Shakespeare, “doth protest too much, methinks.”

Throughout my entire life, I have had the privilege and the blessing of being friends with a number of exceptional, brilliant, and talented gay and lesbian human beings. Many of them are like family to me, and my life has been continually enriched by their friendships. I am fortunate to have these people in my life, and I feel even more fortunate to belong to a generation that, by and large, has rejected the narrow-minded bigotry of the past and accepted our gay and lesbian brothers and sisters as members of the American community, deserving of equal rights, equal respect, and dignity.

I am more than happy to debate the merits of Levitical law with anyone, but be warned, if you expect me to respect your hermeneutical interpretation, then you must also be willing to denounce the entire sport of American football, which, contrary to Leviticus, requires touching the hide of a pig.

I mention all of this because a friend of mine was recently defamed by Greg Aymond. Without any proof whatsoever, without any corroborating evidence at all, Greg Aymond accused my friend, who just recently became engaged to the woman of his dreams, of being gay. First, of course, it’s not true. But perhaps more importantly, secondly, it’s creepy.

Greg Aymond writes more about being gay than my good friends at the Forum for Equality. He alters more photographs of men than the editors of Playgirl. A few months ago, he wrote: 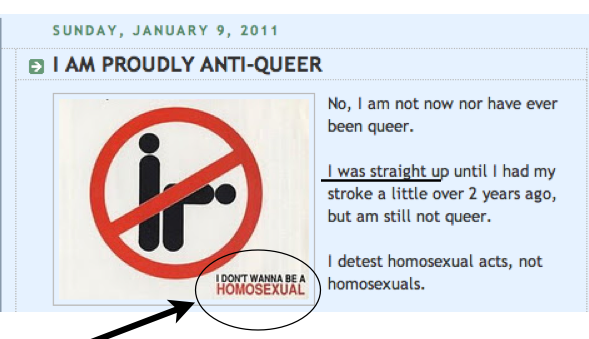 He’s a “proudly anti-queer” blogger who “don’t wanna be (sic) a homosexual,” yet oddly, bafflingly, claims that he “was straight” until his stroke. Dan Savage would blush at this foolishness.

Thanks for the update, Hamlet.

Honestly, I wonder if that makes him more motivated. As a word of advice, from my gay friends, there is apparently this new iPhone app, Greg; it’s called Grindr.

On a final note:

If you want to know who is spreading the vicious, bigoted, and divisive lies about my friend, I’m willing to bet $1,000 that it’s the same woman whose campaign claimed I didn’t actually have cerebral palsy and that I, instead, suffered from fetal alcohol syndrome. She made the unfortunate mistake of wearing her last name on her t-shirt and standing directly next to a former member of the Ku Klux Klan– that’d be the fashionista with his glittering shirt, Greg Aymond.