As it turns out, in America, you can’t compel someone to testify under oath, with penalty of misdemeanor contempt, without first letting them know what, specifically, they’re supposed to answer. Basic due process.

I watched today’s Alexandria City Council meeting, and although it ended on a collegial and cooperative note, I can’t help but feel incredibly embarrassed for the entire legal profession.

For those of you who don’t know: The Alexandria City Council, acting on a split 4-3 vote, decided to issue improper subpoenas in an attempt to compel the Mayor and members of his staff to answer questions, under oath and under penalty of contempt, about the operations and expenses of the Alexander Fulton Hotel. The City Council wanted to use a very limited provision of the City Charter.

This has become so convoluted and infected by political posturing that it’s almost impossible to accurately unpack. In and of itself, it’s not necessarily a captivating or interesting story, but what is interesting, however, is the ways in which Ed Larvadain III and Roosevelt Johnson, in particular, have exploited the confusion around the nuances of the City’s role with the Fulton in order to sow the seeds of distrust and apprehension– when, all the while, they should know better.**

** For a more in-depth analysis, see the postscript.

Here are the basic facts: (1) The City of Alexandria has owned a hotel property in Downtown Alexandria since the early 1980s. Its construction was actually funded by a government grant, administered by the City. It may sound crazy now, but thirty years ago, cities all over the country were engaging in “creative” partnerships with hotel and convention center operators; (2) For over two decades, the City– that’s you and me and everyone else who resided and paid taxes in Alexandria– didn’t have to worry about the hotel. And then, in the mid 2000s, its manager and operator, Raj Patel, filed for bankruptcy. Raj had been cozy with certain members of the City Council and their political benefactors. Sorry, but, as uncomfortable as it may seem to some, that is just a fact; (3) The problem was: The City owned the hotel. Its manager went into bankruptcy. We– the taxpayers– had all spent millions of dollars to build a connecting convention center. The bank that held his leasehold mortgage didn’t respond in an adequate or timely fashion, and the entire hotel subsequently became under the control of the City; (4) We had two options: (a) We could close the hotel, lose a ton of money, lose a bunch of conventions, and permanently and irrevocably screw up the resale value and the entire convention business, or (b) We could find a competent hotel manager, retain the business, retain the 50+ jobs at the hotel, and retain the hotel’s value.

Here’s what makes me particularly mad: The City Council wanted to keep the hotel open. They passed emergency ordinances and resolutions. Alexandria was in real jeopardy of losing two of its biggest conventions. I understood their concerns. But I know that neither I nor the Mayor nor anyone else in his administration ever desired to operate or manage a hotel. In the months after Raj filed bankruptcy, the City was basically forced into that position; it was necessary to both save the big conventions (which have an enormous economic impact) and save the value of the hotel, a property owned by all of us. The goal, always, was to get out of the hotel business completely.

So, subsequently, the Mayor created the Downtown Hotels Initiative (DHI). And here’s what is lost: the DHI isn’t merely focused on the global deal (the Fulton, the Bentley, and the Riverfront Center); it also aims to ensure the City no longer has to bear the operational burdens at the Fulton. You get that? The DHI aspires to solve a global issue– that is, the entire hotels and convention center complex–but  perhaps more importantly, it focuses on getting Alexandria out of the hotel business.

Yes, we may still own a hotel in Downtown. Yes, we shouldn’t own that hotel. But at the very least, let’s make sure that taxpayers no longer have to bear the burden of paying for operating a hotel. And people of Alexandria, hark, that is EXACTLY what we all did. The deal hasn’t been finalized, sure, but it’s closer now than ever. Either way, though, in the meantime, today, we’re not paying to operate a hotel. Yes, we still own the building, and we should sell it, for sure. But we can’t sell it and it can’t operate if there are broken elevators or a malfunctioning air conditioning system, for example.

That’s why Ed Larvadain III is, in my opinion, an idiot. (With the exception of T.W. Thompson, I rarely trust men with moustaches). Seriously, though, during today’s meeting, Larvadain attempted to use two and a half year old invoices to “prove” the City was “deep, deep (sic) in the hotel business.” I’m not sure why anyone voted for this man, but today, he proved himself to be both ignorant and duplicitous. No, no, Ed Larvadain, the City of Alexandria (holy hell, you’re the Finance Chair) is now the landlord; how do you not understand this?

The City is trying to sell the hotel at the highest and best price to the most skilled and most qualified buyer, and Ed Larvadain III and Roosevelt Johnson are so ridiculously uninformed and comically prosecutorial against the Mayor and his administration that they’d rather implicitly accuse people of crimes than actually tell the damn truth. They, together, are doing more damage to the value of our public asset, the Fulton, than any bankruptcy court could ever do.

A few other points:

(1) Roosevelt Johnson proved today that he has problems with the English language and with anger management. A few years ago, he allegedly lunged at an older woman during a neighborhood watch meeting. Today, he nearly broke a blood vessel while gaveling down the City Attorney. I know Roosevelt. I used to think he was a nice guy, but I don’t believe that anymore. He’s getting bad advice. He’s in way, way over his head (sorry), and more often than not, he makes absolutely no sense. His temper is reckless. He’s ridiculously arrogant, constantly referring to himself in the third-person; Roosevelt, it’s weird.

(2) Mitzi Gibson is smart, but she still doesn’t know what to do. My advice to her: Be your own person; people will respect you a heckuva lot more.

(3) Jonathan Goins apparently left early today. Resign already. You don’t even live in the district. You’ve cost “your” district millions of dollars. If you can’t stand the heat, get out of the kitchen. Everyone else is on a mission.

(4) Ed Larvadain III, if I had more money than I knew what to do with, I’d probably buy a bunch of billboards with your face and the caption, “Worst Lawyer in Louisiana.” Stop being so embittered and confrontational. You’re embarrassing everyone around you. 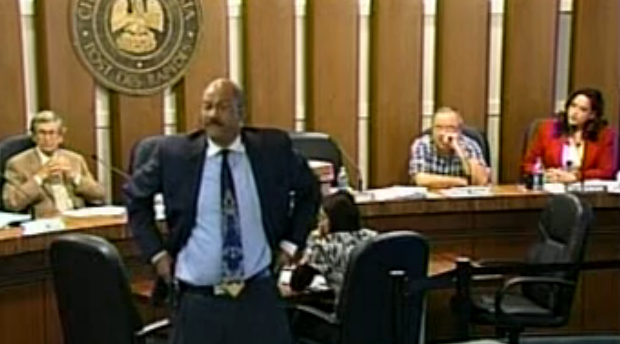 Postscript: The Council was acting under the authority provided by Section 2-08 of the Alexandria City Charter. It states:

The city council may make investigations into the affairs of the city and the conduct of any city department, office or agency and for this purpose may subpoena witnesses, administer oaths, take testimony and require the production of evidence. Any person who fails or refuses to obey any lawful order of the council shall be guilty of a misdemeanor and shall be punished in such manner as the council shall fix by ordinance.

These are seemingly broad powers, right? The problem is, however, that this power is constrained not only by state and federal law but by the Council’s own procedural law, namely Section 2-23(x). I’d paste the entire Section, but it’s really cumbersome. Suffice it to say, the Council has been repeatedly and constantly violating its own procedural laws.

Here’s what you do:

To step deep into it: Some folks, including Greg Aymond and Roosevelt Johnson, continue to misunderstand the executive branch’s authority under the City Charter. Go back to sixth grade civics. Three branches of government, guys.

I honestly can’t be sure if Greg and Roosevelt don’t understand the fundamental differences between the City Charter and the City Code of Ordinances or if they actually believe in their spin.

Gentlemen, gentlemen: The Charter is, like, the Constitution; it is the supreme municipal law; it is the City’s source document, and it outlines the parameters of executive and legislative authority. So, guess what, the Council can’t pass a bunch of ordinances that step all over the Mayor’s authority as provided by the Charter. The Charter says only the Mayor can specifically direct employees. The Council then passed a procedural ordinance attempting to require certain employees to participate in their meetings. The City Charter trumps ordinances; if there is a conflict, then you defer to the Charter. If the Mayor is responsible for the actions of employees under the Charter, then the City Council can’t just pass an ordinance stating otherwise.

Roosevelt Johnson accused the Mayor of violating the City Charter. He claimed the violation was a result of the Mayor not submitting an appointee for Finance Director. Roosevelt Johnson lied. You may think it’s minor, but I think it’s important: There’s absolutely no prohibition in the City Charter against a replacement or acting director from serving more than six months; that’s just a Council rule that they passed on their own, in the Code of Ordinances.

But I get it, I guess: Roosevelt Johnson and Ed Larvadain think they can violate their own procedural rules and protocol and, at the same time, enforce intrusive and violative “rules” against the Mayor and his administration, that they can investigate them, subpoena them, get loons like Greg Aymond defending them as if he’s an expert in the law, and then, at the very least, ensure that the local media equivocates. Their ignorant divisiveness will never have to be called out. After all, Alexandria media is more concerned with arguing both sides of an issue than in reporting the truth. Facts be damned. (And yeah, I’m angry, but I’m also amused. It’s all so ridiculous).