I understand I was a close runner-up for this year’s Ashley Morris Award at the annual Rising Tide conference. As I said today on the Twitter, holy moly, it’s just an honor to be mentioned in the same sentence as Ashley. I stuck the Greg Peters-designed and Dirty Coast-produced FYYFF sticker on the front of my desktop. Every single time I write a post on this website, I am confronted with Ashley’s simple and sagacious words of defiance. Months before he passed, I exchanged a couple of e-mails with Ashley; he added my website to his blogroll. I will always be grateful. He opened the door for me in the Louisiana blogosphere. And I am totally floored by the nominations I received for the award named in his honor. Thank you, thank you.  I didn’t even realize I was on y’all’s radar.

For the bargain basement price of $10,000, you can become a platinum sponsor of this year’s Louisiana Family Forum Awards Banquet. Unfortunately, it’s not clear whether or not this donation would be tax-deductible, as it has been in years past. This year, the LFF is saying that the “Louisiana Family Forum Action,” their 501c4 (not tax-deductible), “is writing the next chapter of Louisiana history.” 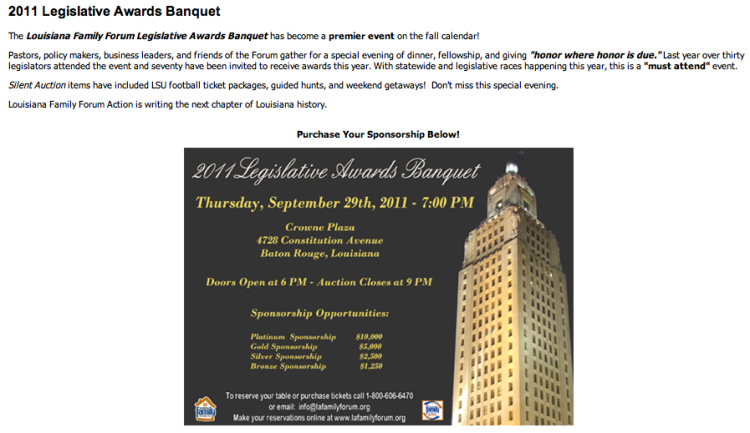 What did Jesus say about potentially skirting tax laws to support your own religious agenda?

I could be way off-base, but I think that when Jesus was talking about Caesar, he was referring to the government.

Either way, I hope the U.S. Attorney’s Office and the Internal Revenue Service will keep a close eye on any and all “donations” given to the LFF’s … I mean the LFFA’s upcoming awards banquet for state legislators.

Not surprisingly, back in Alexandria, revisionist history seems to be en vogue. I won’t pretend to understand what, on earth, motivates people like Sandra Bright to call people like Greg Aymond, but obviously, she doesn’t have the best judgment. (By the way, Sandra, Greg Aymond considers you to be a good friend, and a few paragraphs later, he refers to African-Americans as “darkies.” With friends like him, who needs enemies, right?).

In all seriousness, the debate about the Hodges Stockbarn in the Lower Third neighborhood may be the best example I have ever encountered of myopic and heavily-politicized stupidity.

Here’s the story: Lower Third is an historically African-American neighborhood in the heart of Alexandria. For decades, it has suffered from crime, blight, disinvestment, and neglect, and in 2007, it looked like conditions could have been exacerbated. A 14-acre tract of property (the former Hodges Stockbarn) in the middle of Lower Third and in a key location on Louisiana Highway 1 almost became a junkyard. Residents complained and begged the City to intervene, which it did. The City bought the property, with the intention of redeveloping the site as a mixed-use PUD (Planned Unit Development).

I know this story because I was there; I helped write the Request for Proposals. The City also had in its possession a comprehensive study of the neighborhood, a study conducted by J-Quad (which, not that it really matters, is a minority-owned business). And the J-Quad study, which was based on extensive research and interviews (with, among others, Sandra Bright), clearly said: Lower Third needs more housing options. The neighborhood needs a better mix of housing types; it needs apartments, condos, and patio homes.

Then, amazingly, someone stepped up to the plate: New Horizons, one of the top 100 multi-family developers in the country. They secured money from the Bush Administration, and they proposed building 56 moderate-income apartment units on the back six acres of the property. Wow, right? It was the biggest development ever proposed in thirty years in Lower Third.

But guess what happened? A couple of rich slumlords (my word)– people who had long dominated the rental market in that particular neighborhood– stood up in opposition. No, no, they said, not so fast. We want a commercial-only development. They were loud and vocal, and they convinced other people to rally behind them. It was all insidious. It was wrong. It was stupid. And it was an impediment. They very nearly convinced the Alexandria City Council to reject millions of dollars in grant money, and for some reason, no one ever disclosed the ulterior motive.

Thankfully, though, despite the opposition of their own district Councilperson, the project went forward. Today, there’s an $8 million apartment complex on the property, and before it even opened its doors, there was a waiting list.

So, fast forward: The new apartment complex is open, and the developer wants to expand. He has a waiting list, after all. Obviously, there is market demand. But it gets better: The developer also wants to build a commercial component– two restaurants, an insurance office, a pharmacy, a nail salon, and room for a police substation. This will be huge for that neighborhood. It’s awesome. It should be a cause for celebration.  Yet, somehow, for some strange reason, it’s yet another opportunity for people to attack and criticize the Mayor and his administration.

Give me a break. Really.

Regardless of what Fred Rosenfeld says on the radio about government involving itself in the real estate business (to be sure, I respect his opinion on this, considering he’s built his business on federal property), no one bit off more than they could chew. I know this, because I was there. And no one– and I mean NO ONE– promised a pharmacist that he’d be given a building on the property. That’d be illegal, a violation of Article Seven of the Louisiana State Constitution. You know what actually happened? The City said, “Give us a development proposal. Maybe we can assist with publicly-owned infrastructure.” And that proposal never arrived.

At the end of the day, if the Alexandria City Council decides to act righteously and in the best interests of the people of that neighborhood, they will be “saddled” with a multi-million dollar mixed-use development, a brand-new retail facility, and increased police protection. And the district Councilman, who acts as if he is merely attempting to make a “bad situation better,” will have at least 120 additional constituents.

But it’d be best not to acknowledge this, because, wow, that could make the Mayor look good.