As promised, I’m kicking off a series of interviews with Louisiana’s leading progressive leaders and advocates, and to me, it seems appropriate to begin this series with a follow-up interview with one of Louisiana’s youngest progressive advocates, Zack Kopplin, the recent Baton Rouge Magnet High School graduate and incoming Rice University freshman who made national and international news fighting for the repeal of a law in Louisiana that allows the teaching of creationism and other religiously-based beliefs in the public school science classroom. 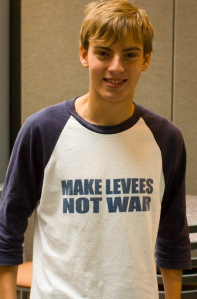 Oh, and yesterday, he inspired a pretty hilarious Doonsebury comic.

Recently, in its “Legislative Scorecard,” The Times-Picayune reported:

Zack Kopplin, a recent high school graduate, got nowhere in his effort to repeal the Science Education Act, which allows science teachers to use supplemental materials that critics say could introduce biblical creationism into biology lessons.

Then, only three paragraphs later, it reported:

A measure to give local school boards broad new authority to choose textbooks they want, instead of being bound by the recommendations of the state Board of Elementary and Secondary Education, passed the House but failed to get through the Senate.

The Times-Picayune may believe that Mr. Kopplin “got nowhere in his effort to repeal the Science Education Act,” but I, for one, don’t think that’s true. Despite the repeal effort’s defeat, Mr. Kopplin, along with Dr. Barbara Forrest and the Louisiana Coalition for Science, refused to retreat, refocusing their efforts at successfully defeating HB580, a bill they rightfully interpreted as yet another “stealth” attempt to undermine science curriculum, the teaching of evolution, textbook standards, and BESE’s oversight authority in order to better allow for the introduction of creationism, intelligent design, and other religious beliefs in the science classroom.

I first interviewed Zack in April, and I asked him for a more informal, post-session follow-up interview. Here are my questions and his answers in full:

Lamar: Another blogger, who shall remain an anonymous, witty, and usually insightful librarian from New Orleans, in a post called “Cause Celebe (sic)” wrote, “Look, I’m as upset as the next post-medieval person that the State of Louisiana insists on teaching magic in science class, but I didn’t agree to make the whole story about a political player’s type-A kid’s extra-curricular project. Stop enabling these people.” A few questions:

First, why are you making this all about you? Relatedly, how much money have you made from this “extra-curricular” project, and how much are you paying the media?

Zack: It is not all about me. I’m beginning to mentor the new high school leaders of next year’s repeal effort.

I definitely have not earned a cent from what I have done.  I also definitely don’t have the money to pay off the media.  I’m about to be in college.

Lamar: Aside from the fact that most don’t believe you can split people into either a Type A or Type B personality, wouldn’t you agree that, like most people with a Type A personality, you’re actually a middle-aged man with heart problems and anger management issues?

Zack: No, I think it’s going to take a few more years of working with the legislature to age that much.

Lamar: If this was, in fact, an extra-curricular project, what grade did you receive? Why don’t you go outside more and play sports?

Zack: I received an A on my project, although it wasn’t extra curricular project; it was actually my senior project.

Honestly, I do regret not being able to play sports this year.  I love to play soccer and run (and to make myself swim), but sometimes when you are working 80 hour weeks it is hard to fit that in.  I’m trying to getting back into running now that I have a break.

Lamar: I’m enabling you; aren’t I?

Lamar: On a more serious note, as Dr. Barbara Forrest noted, you helped to defeat HB580. Do you believe the bill was, in any way, a response to your earlier victory at the BESE Board?

Zack: It was absolutely a response.  The creationists’ next goal after passing the LSEA was to get rid of biology textbooks that actually taught science.  Our state Board of Education was not interested in throwing out evolution, and instead stood up for teaching evidence based science.  This was an attempt by creationists to get around the state board’s decision.

I’d like to take this opportunity to thank the legislators who stood up for science and stopped a new creationism law from passing, and also thank our state Board of Education for approving good biology books in the first place.

Lamar: You’ve attracted the endorsements of 44 Nobel Prize laureates. Are there any laureates you are particularly proud to have on your list? Any laureates that surprised you?

Zack: I was not surprised that Nobel Laureates supported science, though I was surprised that they would be willing to listen to me and support me, a high school student.  I did not expect that they would actually take time to talk to me.  I am proud to have all of them supporting the repeal.  I am especially proud to have Sir Harry Kroto’s name first on the letter because of how much help he gave me in getting those signatures.

Lamar: When you and other students testified in support of repealing the LSEA, by all accounts, you were treated somewhat condescendingly by Senator Julie Quinn.  At one point, she dismissed all the scientists in support of the repeal– which included Dr. Kevin Carman, the LSU Dean of Sciences, Dr. Claude Bouchard, the former head of Pennington Biomedical, and also 43 Nobel Laureate scientists (The effort has since earned the endorsement of another Nobel Laureate).  Why?  Senator Quinn claimed she was “tired of seeing little letters behind everyone’s names,” which is ironic considering Ms. Quinn, during the same hearing, also made certain that everyone knew about the “little letters behind her name.” The “J” and the “D,” or, if you’d prefer an “E,” S”, and “Q.” What was Julie Quinn hoping to do by being so theatrically and almost comically dismissive of world-renowned scientists and civically-minded students?

Zack: I think that Senator Julie Quinn is hoping to win the Louisiana Family Forum’s Gladiator Award.  Obviously, the way to win that is by attacking high school students who want to learn evidence-based science and Nobel Laureates whose scientific credentials are impeccable.  I guess it makes sense though; it is a second century award for a second century mentality.

Lamar: Why are you giving Michele Bachmann so much press? Why do you want her to be President? Did you read that report on CNN about how she supports intelligent design education? Kevin Allman may have asked her the question, but I know who put him up to it.

Zack: Presidential candidates should not make stuff up.  Michele Bachmann has made things up about Nobel Laureates who support intelligent design (which is creationism which has been shoved haphazardly into a lab coat in an attempt to pretend it is science).  She shouldn’t be allowed to do that.

I read the CNN report on the Congresswoman.  She dodged the question about Nobel Laureates because she does not have Nobel Laureates who support creationism.  A lot of people wanted Kevin Allman to ask her, because it was an important question.

Lamar: What happens next year with the LSEA?

Zack: As I’ve mentioned before, I’m going to be mentoring other high school students in leadership roles for next years repeal.  We will keep building our Nobel Laureate letter and our endorsements.  We will keep educating students about the effort.  We feel we have a very strong shot next year. Even though we didn’t succeed right away, Louisiana students want science in their science classrooms, and before long, this law will be repealed.

Lamar: If it’s not already clear, despite my sarcasm, I commend you, Zack. When I was your age, I wrote about the importance of protecting science education, particularly the study of evolution, in an article published in The Town Talk. But I was writing about my peers in Kansas, though I definitely worried about the ways in which the actions in Kansas could have a ripple effect in Louisiana. And apparently, it has. So, it’s refreshing and inspiring that you’ve taken a stand, regardless of what the yellow blog says. So, four final questions….

Zack: I’d like to point out something in what you’ve said.  While anti-science sentiment in other states has obviously had a ripple effect and helped get Louisiana’s creationism law passed, our strong stand in support of science this year has had a ripple effect across the rest of the country.

We’ve fought off creationist attempts to scrap biology textbooks and influenced textbook adoption for the rest of the country.  We’ve set an excellent standard with that.

I also feel that the repeal effort was a contributing factor in the defeat of the attempts to pass creationism laws in other states like Tennessee.

Lamar: Why did you decide to attend the best undergraduate university in the American South?

Zack: I really like Rice.  I think I’ll be able to not just continue working on the repeal, but also to expand my activism to supporting science education in Texas.

Lamar: I’ve been called the “Anti-Christ” for previously reporting on the Louisiana Science Education Act. I understand you’ve been similarly described. Welcome to the club. We’re both moving to Texas in a month. Do you have any advice for aspiring Louisiana Anti-Christs? Should reasonable people simply ignore those who traffic in such hyperbole, or is it important that Louisianans who believe in science education attempt to engage all people, even if they behave unreasonably?

Zack: You should always try to engage everyone, because I believe everyone deserves a strong science education and everyone should be in support of teaching students about the way science explains how our world works.

That being said, ignore the personal attacks.  I’ve been told things as ridiculous as I caused Hurricane Katrina.  Don’t listen to people like that.

Lamar: What’s cooler? Being featured in Vogue in Italy or having Seth MacFarlane, creator of the TV show Family Guy, tweet, “Way to go, Zack Kopplin! Brian Griffin would approve”?

Zack: I’ll go with Seth MacFarlane, because I’m a huge fan, but I’m very honored by both.

Lamar: When you’re at Rice, make friends with as many of your fellow Louisianan classmates as possible, remind your classmates that Louisiana lumber and Louisiana oil built Rice’s endowment, and remember that a Louisianan is the only reason Rice has a new, state-of-the-art basketball court, among other things. But don’t be too obnoxious, OK?