Yesterday, as a friend and I drove back to Alexandria from Houston, we passed by a large, handwritten sign reading, “DON’T BLAME ME. I VOTED FOR THE AMERICAN,” proudly displayed in someone’s front yard, near the border of Rapides and Vernon Parishes.

I’ve been writing about smear campaigns against Barack Obama from, what seems like, the very beginning. I wrote my first post in January 0f 2007, a month before then-Senator Obama announced his candidacy, about an article by right-wing pundit Debbie Shlusser that claimed Obama was a “secret Muslim.” The bizarre stories about his birth certificate hadn’t yet surfaced, but whenever they finally did, honestly, I wasn’t too surprised.

Still, I’ve written about this for a couple of reasons: First, these stories and conspiracy theories demonstrate the lengths to which his opposition will go in order to undermine his legitimacy and credibility, but second and more importantly, they are, by in large, promulgating the notion of Barack Obama as Other. Unlike the critics on the left who opposed George W. Bush’s legitimacy because of the Supreme Court ruling or compared him to Adolf Hitler (which, let’s face it, is becoming an unfortunate bipartisan tradition), these attacks against Obama are based on lies about his fundamental identity as a human being: his birthplace, his religion, his ethnicity.

To me, it is particularly noteworthy that so many Americans actually believe in these theories. He wasn’t born in America. He was born in Kenya or maybe Indonesia. He’s not a Christian. He’s a “secret Muslim.” He’s not the son of a white woman from Kansas and a black man from Kenya. He’s an Arab.

And it’s even more interesting (and frustrating) that these ideas have gained traction in our national conversation. People are buying billboards and planting homemade signs in their front yards that claim the President isn’t actually an American. Certainly they have the right to do so, but that’s not the point. The point that what they’re saying is a lie– and not a lie about the President’s policies, but a lie about his identity.

When Barack Obama won the Presidency nearly two years ago, some talked about the dawning of a “post-racial America.” Obama was a “post-racial” candidate, and America demonstrated its rejection of institutionalized racism by electing him, or so the logic went. 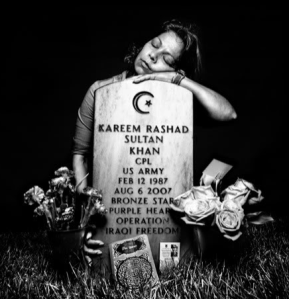 Maybe we are living in a post-racial America, but during the last two years, it’s been difficult to notice any real, appreciable difference. If anything, racism, nativism, xenophobia, and bigotry have become more socially acceptable and widespread. In the aftermath of 9/11, George W. Bush reminded Americans that Islam was, at its core, a peaceful religion and that millions of Americans were members of the Muslim faith. Today, our troops are in direct danger of attack because some Christian preacher in Florida wants to prove his own righteousness by burning copies of the Koran on the anniversary of 9/11, all as a publicity stunt.

As a culture, we aren’t treating our Muslim neighbors and citizens as equals; we’re treating them with mistrust and ignorance. When a group of Muslim-Americans announced their intention to construct a massive community center in Lower Manhattan, the project became defined as the Ground Zero mosque. No, it’s not exactly just a mosque, and no, it’s not on Ground Zero (it’s at the site of a Burlington Coat Factory). But that didn’t really matter.

Today, we’re giving attention to people who want to burn religious texts and people who say our President is lying about his birth certificate and his religion. I’m not sure what these people ever did to earn our collective attention and respect, but they have it, nonetheless. And miraculously, these people are being propped up by a media that seems to care more about reporting the stories of people who believe in lies than in actually correcting those lies.

Today, there was an “emergency” interfaith meeting in Washington, D.C. The New York Times reports:

Prominent Christian, Jewish and Muslim leaders held an extraordinary “emergency summit” meeting in the capital on Tuesday to denounce what they called “the derision, misinformation and outright bigotry” aimed at American Muslims during the controversy over the proposed Islamic community center near ground zero.

“This is not America,” said Cardinal Theodore E. McCarrick, the emeritus Roman Catholic archbishop of Washington, flanked by three dozen clergy members and religious leaders at a packed news conference at the National Press Club. “America was not built on hate.”

They said they were alarmed that the “anti-Muslim frenzy” and attacks at several mosques had the potential not only to tear apart the country, but also to undermine the reputation of America as a model of religious freedom and diversity.

The clergy members said that those responsible for a poisoned climate included politicians manipulating a wedge issue in an election year, self-styled “experts” on Islam who denigrate the faith for religious or political reasons and some conservative evangelical Christian pastors.

The Rev. Richard Cizik, president of the New Evangelical Partnership for the Common Good, said: “To those who would exercise derision, bigotry, open rejection of our fellow Americans of a different faith, I say, shame on you. As an evangelical, I say to those who do this, you bring dishonor to those who love Jesus Christ.”

The Onion puts it better than anyone else:

Man Already Knows Everything He Needs To Know About Muslims

SALINA, KS—Local man Scott Gentries told reporters Wednesday that his deliberately limited grasp of Islamic history and culture was still more than sufficient to shape his views of the entire Muslim world.

Gentries, 48, said he had absolutely no interest in exposing himself to further knowledge of Islamic civilization or putting his sweeping opinions into a broader context of any kind, and confirmed he was “perfectly happy” to make a handful of emotionally charged words the basis of his mistrust toward all members of the world’s second-largest religion.

“I learned all that really matters about the Muslim faith on 9/11,” Gentries said in reference to the terrorist attacks on the United States undertaken by 19 of Islam’s approximately 1.6 billion practitioners. “What more do I need to know to stigmatize Muslims everywhere as inherently violent radicals?”

“And now they want to build a mosque at Ground Zero,” continued Gentries, eliminating any distinction between the 9/11 hijackers and Muslims in general. “No, I won’t examine the accuracy of that statement, but yes, I will allow myself to be outraged by it and use it as evidence of these people’s universal callousness toward Americans who lost loved ones when the Twin Towers fell.”

“Even though I am not one of those people,” he added.

When told that the proposed “Ground Zero mosque” is actually a community center two blocks north of the site that would include, in addition to a public prayer space, a 500-seat auditorium, a restaurant, and athletic facilities, Gentries shook his head and said, “I know all I’m going to let myself know.”

Gentries explained that it “didn’t take long” to find out as much about the tenets of Islam as he needed to. He said he knew Muslims stoned their women for committing adultery, trained for terrorist attacks at fundamentalist madrassas, and believed in jihad, which Gentries described as the thing they used to justify killing infidels.

“All Muslims are at war with America, and I will resist any attempt to challenge that assertion with potentially illuminating facts,” said Gentries, who threatened to leave the room if presented with the number of Muslims who live peacefully in the United States, serve in the country’s armed forces, or were victims themselves of the 9/11 attacks. “Period.”

“If you don’t believe me, wait until they put your wife in a burka,” Gentries continued in reference to the face-and-body-covering worn by a small minority of Muslim women and banned in the universities of Turkey, Tunisia, and Syria. “Or worse, a rape camp. That’s right: For reasons I am content being totally unable to articulate, I am choosing to associate Muslims with rape camps.”

Over the past decade, Gentries said he has taken pains to avoid personal interactions or media that might have the potential to compromise his point of view. He told reporters that the closest he had come to confronting a contrary standpoint was tuning in to the first few seconds of an interview with a moderate Muslim cleric before hastily turning off the television.

“I almost gave in and listened to that guy defend Islam with words I didn’t want to hear,” Gentries said. “But then I remembered how much easier it is to live in a world of black-and-white in which I can assign the label of ‘other’ to someone and use him as a vessel for all my fears and insecurities.”

Added Gentries, “That really put things back into perspective.”