On his website CenlaNews.com, Rapides Parish Police Juror Steve Coco has accused the National Association of Counties (or NACo) of publishing a doctored photograph of President Obama, an image that superimposes a lit cigarette awkwardly positioned in the corner of Obama’s mouth. 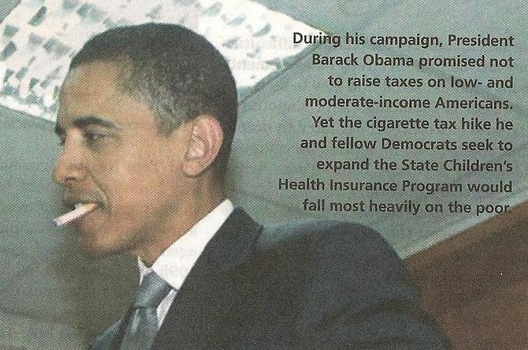 Several people continue to claim the picture is a fake. Evidently they believe it’s impossible that there’s any evidence of Obama having a cigarette in his mouth and that he could be smoking in the White House and aboard Air Force One. This picture was published by NACO, the National Association of Counties, founded in 1935. NACO’s membership totals more than 2-thousand counties, representing over 80% of the nation’s population. NACO headquarters is on Capitol Hill, publishing a biweekly newspaper, County News, that focuses on issues and actions in Washington, D.C. and around the Country.

NACO officials meet regularly with the President at the White House. Maybe that’s where they took the picture.

If you still think the picture’s a fake, prove otherwise.

By Obama’s own admission and by the disclosures made by his physician, there’s no doubt he still smokes an occasional cigarette, but even at the risk of sounding nit-picky, there is absolutely no evidence or record of the National Association of Counties distributing this doctored photograph. In fact, an extensive search of the online record suggests that Steve Coco of Cenla News somehow scored an exclusive report— although, importantly, Juror Coco’s report features no sources or supporting links and documentation.

A review of NACo’s archives and the online record of NACo’s coverage of President Obama reveals that the organization has never published or distributed this particular image. Incidentally, the current President of the National Association of Counties, Valerie Brown, has made health care reform the organization’s top legislative priority:

President Valerie Brown is making advocacy for national health reform a hallmark of her leadership of the National Association of Counties.  Supervisor Brown is working with the Obama Administration and  Congress to ensure that counties’ interests in expanding health access, reducing costs and improving the health of individuals and communities are included in federal health reform legislation.  Under her leadership, NACo will also stand ready to assist counties in implementing health reform when it is enacted.

Juror Coco would have his readership believe that this particular picture was “published by NACo” and challenges people to “prove otherwise.”

I have e-mailed NACo here, and if you are also skeptical that the National Association of Counties would publish and distribute a doctored photograph of the President, I would encourage you to do the same. If e-mail is not your thing, then they also welcome phone calls. Just dial (202) 393-6226.

Steve Coco, an elected official, is accusing the National Association of Counties with a provocative and sensational charge, and if it is true, he has uncovered news of national import: The largest association of county government officials “publishing” a phony photograph of the President.

I, for one, eagerly await NACo’s response and wonder if they will “prove otherwise.”