Borrowing from a regular feature in The New York Times, here’s one local’s perspective on how a tourist should spend 36 hours here in Central Louisiana. Your comments, input, and criticisms are more than welcome.

Note: There is no way around it. If you want to explore Central Louisiana, you’ll need to rent a car and prepare yourself for a few short excursions, some of which are off the beaten path. 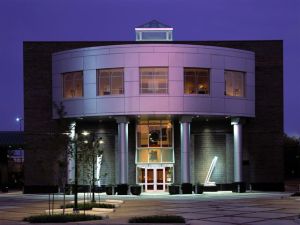 All roads in Central Louisiana lead to Alexandria, the largest city in the region. Founded in 1805, Alexandria was settled because of its prime and strategic location on the Red River.

You should begin your tour at the Alexandria Museum of Art (pictured left), first opened in 1977 and then extensively renovated in 1998. The museum is located at 933 Main Street, on the banks of the Red River, and the building, which houses an extensive and, for its size, impressive collection of acclaimed and award-winning regional art, is itself an interesting piece of architecture: a contemporary “new” wing seamlessly woven into an historic neo-classical bank building; the old bank building, built in 1898, is listed on the National Register of Historic Places.

From the front entrance of the Alexandria Museum of Art, it’s a short walk to the Alexandria Riverfront Amphitheater, and depending on when you’re in town, you may have the opportunity to catch an outdoor concert. The amphitheater hosts everything from plays to symphonies, rock concerts and jazz ensembles, and it offers a panoramic view of the Red River.

If you’re still in the mood for museums, you can walk over to the Arna Bontemps Museum on 1327 Third Street. Arna Bontemps was a world-renowned Harlem Renaissance writer, and the museum, the first-ever African-American history museum in the State of Louisiana, is located in Bontemp’s birth home.

History buffs should also make the short walk to the Louisiana History Museum on 503 Washington Street; the museum features one of the most extensive collection of historical artifacts in the State and is a treasure trove of information on the role of Central Louisiana in both the Civil War and World War II.

From Downtown Alexandria, it’s only a short drive to the Alexandria Garden District, one of only three neighborhoods in the State listed on the National Register of Historic Places and, in my opinion, home to some of the most beautiful residences in Louisiana. What makes the Garden District so special isn’t its uniformity; it’s the neighborhood’s rich architectural diversity- Colonial Revivals, English Cottages, Mediterranean Villas, and Victorian, Craftsman, and Oriental bungalows. The neighborhood features one other important feature: the majority of its streets are still paved in its original red bricks.

In my personal opinion, if you’re after the full experience, then the best time to visit Central Louisiana is during crawfish season. I can’t pick just one favorite crawfish place. Many of them are only opened during the reason, and honestly, you can sometimes find delicious boiled crawfish from road side stands. But if you are here during crawfish reason, you have a number of options. Since I can’t pick just one, I’ll poll the audience.

Both Tunks Cypress Inn on Kincaid Lake and Robby G’s on 5859 Jackson Street offer great food year-round, so you don’t have to feel too gypped if you miss the crawfish season. If you decide to drive out to Tunks (about fifteen minutes away from Downtown via LA Highway 28), then do yourself a favor and sit lakeside at the Oyster Bar, and if you’d rather stay in Alexandria and hit up Robby G’s, then you should keep your eyes peeled for their duck po-boy, boiled crab, and fried pickles.

3. PARTY WITH THE LOCALS

If you feel like dancing to a DJ all night, don’t worry; it’s not difficult to find a club. But if you’re more interested in hanging out with the locals and listening to great live music, you’ll want to stop by Spirits Food and Friends on 1260 Texas Avenue. Spirits has been an institution in Alexandria for decades, and every Friday night, they feature some of the best live music you’ll find on this side of LA Highway 190, including New Orleans staples like Walter “Wolfman” Washington, Papa Gros Funk, and Sonny Landreth.

You can also head back Downtown to Finnegans Wake on 812 Third Street. Finnegans, which was immaculately renovated by its two owners, is Central Louisiana’s only authentic Irish pub, featuring a great selection of foreign and domestic beers. Like Spirits, Finnegans also plays host to a variety of musical acts, running the gamut from country to electronica, though, on most nights, you’re likely to catch good rock music from bands brought in from across the South.

But I would caution against staying out too late, because you have a busy day ahead of you.

Last year, National Geographic Magazine named Alexandria as one of the top ten wilderness towns in the country. Aside from the numerous lakes and the hunting and fishing opportunities, there is one primary reason we were honored with this distinction: Kisatchie National Forest. Kisatchie, Louisiana’s only national forest, is a sprawling 600,000 acres, featuring over 40 recreation sites and over 100 miles of biking and hiking trails.

Unfortunately, unless you traveled with a bicycle in tow or you know someone in Central Louisiana who will let you borrow their bike, it may be next to impossible to rent one. So you should either come prepared or ready for a hike. 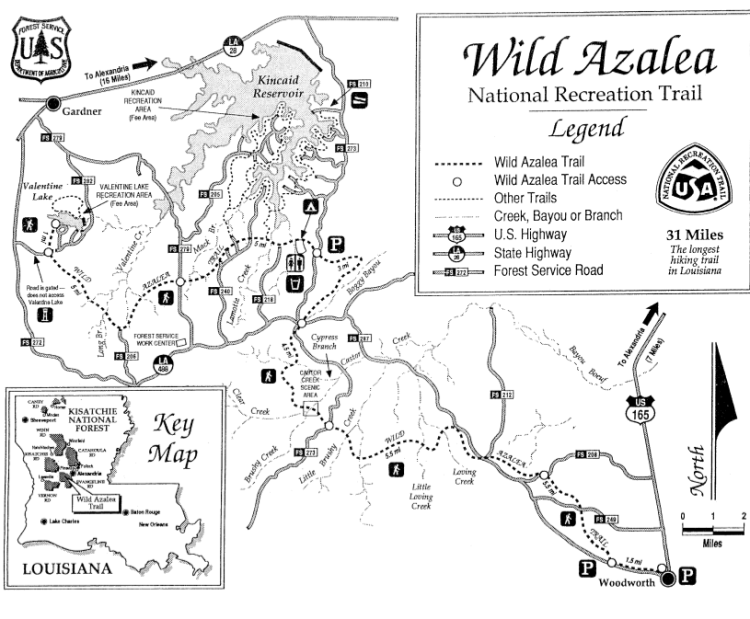 If you’re going to make it to Natchitoches in time for lunch, then you’ll need to hit the road by 11:30. Natchitoches is a charming Southern town made famous by the movie “Steel Magnolias.” In recent years, Natchitoches has experienced somewhat of a Downtown revival, and it would be easy to spend an afternoon browsing through the boutiques on Front Street and admiring the town’s rich architectural beauty.

But you only have an hour or two to spare, and it’s lunchtime.

Natchitoches features a handful of great restaurants, but they are known for one dish in particular, the Natchitoches meat pie. And the restaurant featuring the most famous meat pies is Lasyone’s Meat Pie Restaurant on 622 Second Street. Lasyone’s explains on their website:

Though the meat pie is as old as the Civil War, it wasn’t until later that James Lasyone made this old time favorite famous. In 1967, Mr. Lasyone rented out the bottom half of a building that once was the home to the Phoenix Lodge #38, built in 1859. While the masons still occupied the top portion of the building, James Lasyone started his Meat Pie Kitchen. He convinced some of the town’s ladies to sell him a few of their meat pies. He did a little experimenting and came up with one of his own.

Lasyone’s Meat Pie has been recognized and raved about by a score of magazines including Southern Living, The New Yorker, Glamour Magazine, and Gourmet Magazine. Reviews have also included book articles such as Jane & Michael Stern’s Good Food, Jane & Michael Stern’s Road Food, and Calvin Trillin’s Third Helpings. Major newspapers such as The Houston Chronicle, Times Picayune New York, The Dallas Morning News, Chicago Tribune, and The News World New York have found their way to Lasyone’s Meat Pie Restaurant. It has also been featured in many other national newspapers as well as international papers from France, Italy, and Spain. 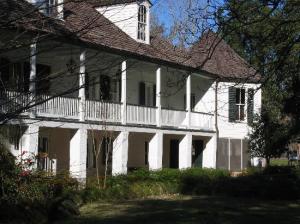 Technically, the Cane River National Heritage Area begins in Natchitoches, but you’ll want to leave yourself enough time to take a relaxing drive down the road. Because between Natchitoches and Alexandria, lining the Cane River, is one of the nation’s most beautiful corridors of antebellum plantation homes, including Beaufort Plantation, Magnolia Home Plantation, Oaklawn Plantation, and, last but not least, Melrose Plantation, which is open for public touring until 4PM.

But the Cane River National Heritage Area, which was recently honored by the White House as one of the nation’s top heritage tourism destinations, offers more than plantations. Quoting:

Natchitoches, established by the French in 1714, is the oldest permanent settlement in the 13 state territory that comprises the Louisiana Purchase. The city is centered on a 33-block National Historic Landmark District containing more than 100 historic homes and buildings, several of which date to the 18th century. South of Natchitoches, along the banks of Cane River Lake, lies one of the South’s finest plantation districts. Centuries-old Creole architecture, majestic live oak trees, and numerous outbuildings dot the landscape, helping to tell the complicated story of plantation agriculture in the region. The Cane River National Heritage Area is also home to several military sites, including colonial French and Spanish forts and an early American fort.

7. DINNER AT THE RED RIVER GRILL

By the time you finish touring the Cane River Heritage Area, you’ll be only minutes away from Alexandria and should have more than enough time to get ready for dinner at the Red River Grill in Marksville, a short 30-minute drive from Downtown on Louisiana Highway One. Red River Grill is a fine-dining restaurant located directly across from the front steps of the Marksville Courthouse, and without a doubt, owners Al and Tanya Mahfouz offer some of the most delicious seafood and steak dishes in the State as well as a great bowl of gumbo. Reservations are recommended, so plan ahead.

After dinner, if you’re a fan of casinos, you can head ten minutes down the street and visit the mega-million dollar Paragon Casino and Resort.

Twenty minutes south of Alexandria, in sleepy Lecompte, Louisiana, is the nationally-famous Lea’s Lunchroom, an institution in Louisiana since opening in its original location in 1928. But even though you’ll be there for breakfast, be prepared to feast on on desserts. Quoting from their website: 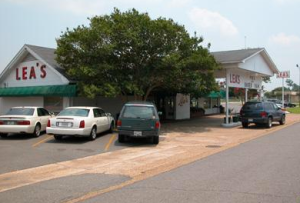 No trip to Lea’s Lunchroom is complete without a slice of their world famous pies. The secret to Lea’s pies comes from Mrs. Georgie’s side of the family.

“The pies are my mother’s recipes,” Mrs. Georgie said in an interview during the 1980s with Louisiana Life magazine, “I use to go to the restaurant at 3 a.m. to meet the pie makers to make the pies.”

Lea’s Lunchroom bakes 8 different types of pies each morning. The daily flavors include coconut, lemon, chocolate, banana, apple, peach, cherry and the best-selling flavor, pecan. The six seasonal flavors are pumpkin, mincemeat, sweet potato, blueberry, blackberry and dewberry. While baked hams were always Lea’s specialty since the restaurant’s inception, it became apparent that something special was happening with the pies when Lea’s sold over 4,000 pies in less than 26 days in 1963. Since the 1960s, Lea’s estimates they sell around 65,000 pies a year with Thanksgiving being their busiest time of year. Lea’s homemade pies are listed in the Louisiana Hall of Fame and were selected as a favorite by Louisiana Life magazine readers. Click here to order a pie from Lea’s.

In March 2001, the Louisiana Legislature proclaimed Lecompte the Pie Capitol of Louisiana. Lea’s went from making two pies a week in 1928 to almost 65,000 pies a year which includes our pecan pie mail-outs.

If you’re not completely exhausted, then you should finish your stay in Central Louisiana with a round of golf at the Links on the Bayou, a municipally-owned course in Alexandria recently recognized by Golf Digest as the best public golf course in the State of Louisiana. If links courses aren’t your cup of tea, you can also play a round at the adjacent Oakwing, another award-winning golf course that meanders around a beautiful bayou.

10. A TOUR OF ALEXANDRIA’S AWARD-WINNING ZOO

The Alexandria Zoo continues to be an incredible experience, for those both young and old, and just this month, the City announced plans for a major $3.5M renovation of its South American exhibit.