Apparently, David Vitter caught the Twitter bug, and today, he proudly announced tweeted  (Can we call him Sinator David “Twitter” Vitter?) that he has introduced a resolution (which will surely fail miserably) to make April 15th National Tea Party Day, which, in addition to honoring Earl Grey, Jasmine, Green, and Chai, will also provide an opportunity for a small contingency of far-right-wingers to put on their sunglasses and head to the nearby City Park armed with hastily-made and tragically unfunny signs (most of which will either call Obama’s citizenship into question or warn against the impending apocalypse). 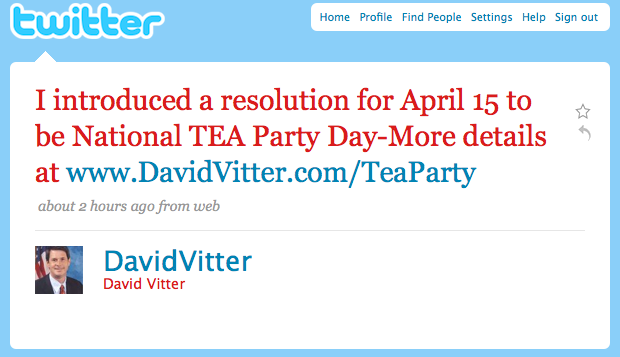 Someone hasn’t yet explained to Senator Vitter that the Boston Tea Party was a protest against taxation without representation– and that today, now that we live in a democracy in which our politicians are elected and re-elected by American citizens, we keep the taxes we collect on our tea. Oh wait, that’s right… Obama isn’t an American citizen. Now, I understand.

For whatever it’s worth, it sure seems like, to me at least, that David Vitter is attempting to deflect all of the terrible, embarrasing news he received whenever he was busted for soliciting prostitutes by fulfilling the role of the outspoken, ideological crusader.

On his campaign website, Vitter’s even trying to raise money for these tea parties: 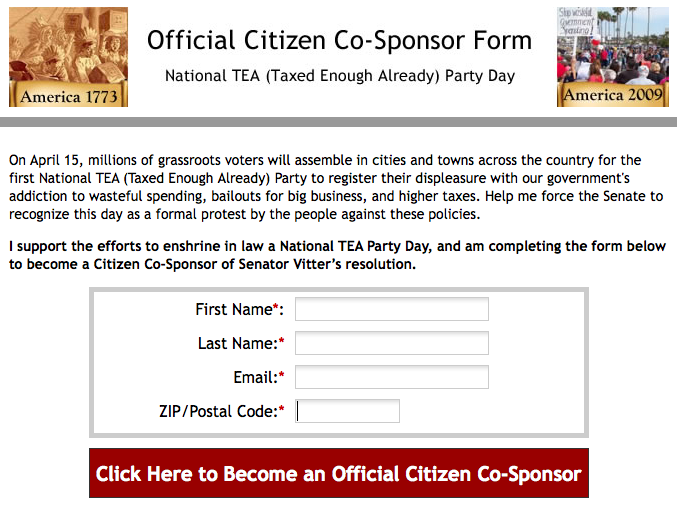 We live in one of the poorest States in the country, with a crumbling infrastructure, a failing education system, and a coastline that shrinks every day… yet this is the kind of work one of our United States Senators believes we elected him to do.

One has to wonder who Senator Vitter actually thinks he works for: the people of Louisiana or the right-wing of the Republican Party.