I stumbled across this report on Shreveport Mayor Cedric Glover’s $2.3 billion “wish list” for his City, which includes finishing Interstate 49, hiring more police officers, and a collection of various infrastructure projects.

As long as we’re wishing, why don’t we ask to fill the gaping hole in the Amtrak commuter rail network here in Louisiana? 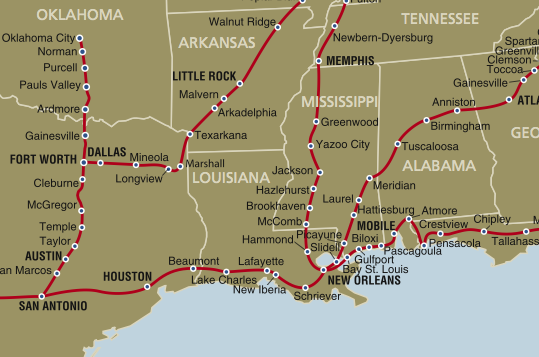 And, not surprisingly, much of the rail infrastructure appears to be in place: 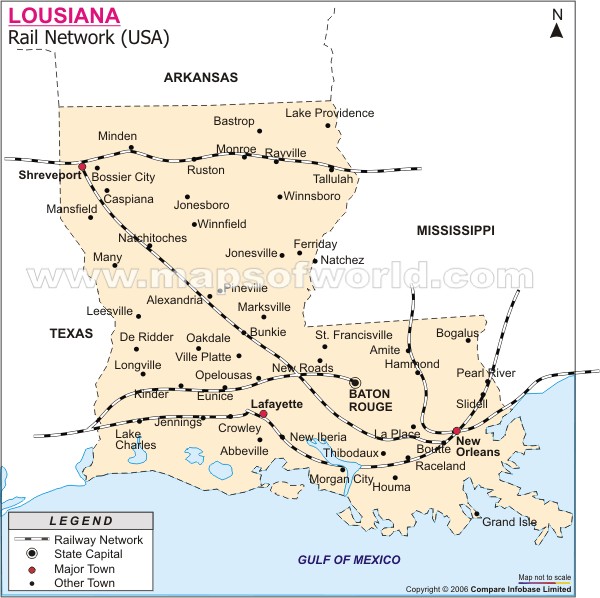 I understand there is already an effort underway to fund a connection between New Orleans and Baton Rouge (or at least there was). Three years ago, a couple of months after Katrina, the project was being pushed by the DOTD. Quoting (bold mine):

Discussions of light rail service have surfaced over the years but never received serious attention. The inevitable question: Would enough people ride it to justify the expense? It’s a whole new situation since Katrina, says DOTD’s Cleo Allen, arguing train service at this stage isn’t a luxury but a necessity.

“We’re talking about a service for displaced workers, people who need to come to town for office jobs, reconstruction, to work on their own houses,” she says. “This service would also really unite the region.”

Then there’s the issue of the sizeable “captive population” of people forced by Katrina from New Orleans to Baton Rouge who either never had transportation or lost it in the flooding. DOTD is anticipating the need to move 600 people per rush hour between the cities, with extra capacity being added if necessary.

The Memorial Stadium depot and the Union Pacific terminal in New Orleans would be linked with bus lines to their respective cities. If DOTD officials approve the proposal from Amtrak and Kansas City Southern and funding can be secured, Allen says, passenger service could begin in a month or two.

A month or two? Seriously? Well, then we should get right to work, right?

A year later, in September 2006, we learned from New Orleans City Business that we had, in the interim, spent $4 million to study environmental impacts and alternative solutions. (And that the project was still “light years” behind).

And guess what? Two years later, in August of 2008, City Business followed up (bold mine):

In terms of a light rail, Brooks said he is still interested in a connection from Louis Armstrong New Orleans International Airport to downtown, but it requires obtaining the rail line from Kansas City Southern and a 150-foot wide right of way along Airline Drive.

“We haven’t given up on that, although it’s expensive and not easy to accomplish,” Brooks said.

We have spent millions of taxpayer dollars studying a project that the DOTD had said would only take a month or two.

Does someone have the real story here?

Now we’re being told that we have to “obtain” the line and that the whole thing also hinges on a 150-foot right-of-way that, it would seem, could obviously and clearly be expropriated for a public purpose.

I understand the need to study environmental impacts, but three years ago, it looked like Amtrak and Kansas City Southern had reached an agreement.

Who is holding this up, the State, KCS, or Amtrak?

Or is this simply the auto lobby?

Right after Katrina, officials immediately realized the necessity and urgency of augmenting commuter rail in and out of New Orleans and Baton Rouge. And three years later, a project estimated to take only two months is still at square one.

Correct me if I am wrong, but I think KCS also operates one of the lines that runs from Baton Rouge, through Alexandria, and into Shreveport (which could then link up with Amtrak lines into Dallas and Little Rock).

Amtrak lines won’t just aid with evacuations and disaster relief, and this isn’t really about tourism dollars. Amtrak transportation can also significantly improve our ability to function together as a State, immediately increasing both inner-state and interstate business communication and augmenting the entire State’s intermodality.