Before I launch into this missive, please understand that I am not attempting to criticize or cast blame on any one individual developer or planner and that, as a student of city planning, I recognize that when the subdivision was being developed, its layout conformed with the reigning paradigm: cul-de-sac subdivisions that somehow created a sense of privacy and intimacy.

But now we know of the unintended consequences; dense isolation is complicated, confusing, and counter-intuitive.

As an illustration, consider this: 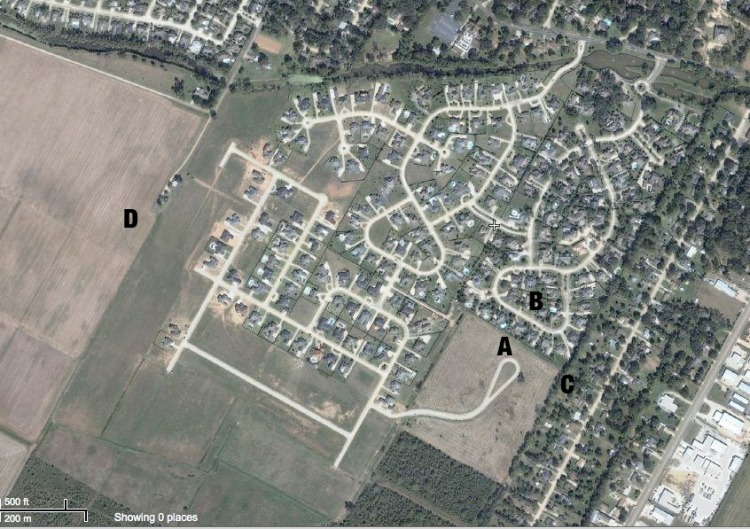 If you build a house on Lot A, you’d live less than five hundred feet away from House B and House C. However, if your kids want to visit their friends who live in House B, you’ll have to drive over 2,200 feet, and if they’re invited to attend a birthday party at House C, which, in most neighborhoods would be considered your next door neighbor, you’d have to drive over a mile.

But that’s not the only obvious problem: Think about police and fire response. Consider the access to other resources.

Area D is noted because it is ripe for expansion, and anyone who lives in Alexandria will recognize that, when developed, there is a simple and obvious way to connect this area with a major arterial roadway (Jackson Street Extension), which would mitigate some of the accessibility problems currently experienced by families who, like my own mother, have to tack on another five minutes to their daily commute simply to travel to a roadway that, geographically, is less than 1,000 feet away from her front door.

As a side note, I’ve always found it funny that when my mother describes the directions to her new home, she has to instruct people to make “five consecutive rights,” which is like telling someone to make a complete circle.