The recent electoral success of Senators James Webb (D-Virginia) and Jon Tester (D-Montana) and the bold rhetoric of reform by presidential and gubernatorial candidates alike demonstrate that economic populism is once again in the national consciousness. In spite of its reputation of being a bastion of reactionary politics, the American South played a crucial role in the history of populism in the United States. In fact, one of the most fascinating episodes of workers overcoming racial barriers to fight for their basic rights took place almost a century ago in and around Central Louisiana.

The first local chapter of the Brotherhood of Timber Workers was formed in late 1910 in Carson, Louisiana. The movement spread quickly across Eastern Texas and Western Louisiana in response to a decade of substandard living conditions, regimented lives, and a lack of job security. A spontaneous general strike (that was quelled everywhere but in DeRidder) in 1907 had radicalized the timber workers of the region against their authoritative and avaricious lumber barons. In June 1911, local representatives met in Alexandria to formalize the Brotherhood of Timber Workers.

The group drafted a moderate constitution that respected the position of their employers and called for a non-violent discussion of the workers’ demands. The union opened membership to women, blacks, and anyone else working in the sawmill industry. The Southern Lumber Operators’ Association responded by labeling the union as socialist anarchists, and began a campaign to crush the union.

Lockouts and blacklists ensued. The popularity of the Brotherhood increased with some early successes, though the winter of 1911-1912 was particularly difficult. The lumber barons imported strikebreakers protected by Pinkerton detectives. By the end of the spring of 1912, 25,000 workers, half of whom were African-American, had become members of the Brotherhood of Timber Workers. As told by Facing South (of the Institute of Southern Studies),

From the very beginning, the Brotherhood organized both black and white workers, a radical move in the post-Reconstruction South marked by racist terror. This went a long way towards defusing company attempts to split workers down race lines, including replacing fired union leaders with black scab labor – despite grinding poverty, black workers largely refused to cross the picket line.

At first white and black workers were organized into segregated “lodges” (multi-racial meetings being, of course, illegal). But at its May 1912 convention, the Brotherhood formally affiliated with the IWW, a move which pushed them further in the direction of racial justice. When legendary Big Bill Haywood found out that black workers were meeting in a separate meeting for the 1912 gathering, he declared:

“You work in the same mills together. Sometimes a black man and a white man chop down the same tree together. You are meeting in convention now to discuss the conditions under which you labor. This can’t be done intelligently by passing resolutions here and then sending them out to another room for the black man to act upon. Why not be sensible about this and call the Negroes into this convention? If it is against the law, this is one times when the law should be broken.”

The union followed Haywood’s advice, nominating a multi-racial slate of delegates to the IWW national convention in Chicago.

Their affiliation with Industrial Workers of the World further radicalized the region’s timber workers, and the lumber barons responded by bringing in more strikebreakers and gunmen. On July 7, 1912, as Brotherhood leader Arthur Lee Emerson addressed a group of nonunion lumbermen in Grabow, Louisiana, shots broke out. Ten minutes later, over 300 bullets had been fired, three men were dead (a fourth would die later), and more than forty were wounded.

Emerson and sixty-four Brotherhood members were arrested, along with three guards and the mill owner. Only the union men were indited. 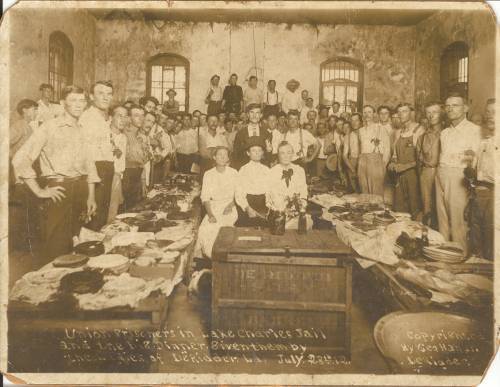