Yesterday, Mayor Jacques Roy and the Alexandria City Council discussed making downtown streets two-way, which, according to Councilman-at-Large Myron Lawson is a component of the master plan drafted by McElroy, Ward, and Associates. The discussion was spurred by an article that recently appeared in USA Today, concerning the city of Danville, Illinois. According to the article, hundreds of American cities have converted their downtown streets into two-way thoroughfares in order to spur economic development.

Danville is one of hundreds of cities — from Berkeley, Calif., to Charleston, S.C. — switching one-way streets to two-way to improve commerce downtown, according to the American Planning Association in Chicago. The trend got rolling in the early 1990s and has expanded this year to bigger cities such as Miami, Dallas and Minneapolis. It’s part of the reinvention of former industrial cities, which are converting empty factories into loft housing and trying to convince suburbanites that downtowns are livable.

“There’s a lot of emphasis now on taming the automobile and emphasizing walking and biking. It’s all part of creating a place that people want to be,” says Marya Morris of the American Planning Association. “The bigger pieces are the major downtown housing booms and having things for people to do after 5.”

The boom in one-way streets began with the Cold War in the 1950s, when cities planned quick routes out of town for evacuation in case of nuclear attack, says John Norquist, one of the first vocal advocates of two-way-street conversion. Norquist was mayor of Milwaukee from 1988 to 2003 and now runs the Congress for the New Urbanism, which promotes the revitalization of cities.

The growth of the suburbs contributed, too, as cities smoothed the route home from work, says Neal Hawkins, associate director for traffic operations at the Iowa State University Center for Transportation Research and Education. Now, though, there are more jobs in the suburbs, more entertainment downtown, and drivers go in all directions.

They drive less efficiently on two-way streets, according to the Thoreau Institute, an environmental advocacy group in Oregon. The slower stop-and-go traffic means cars pollute more, the institute says.

In Danville, 170 miles south of Chicago, two-way streets are meant to speed an economic revival after 15 years of plant closings left downtown streets quiet. The city set up a small-business loan program to attract stores and restaurants.

Now Danville wants to make it easier for customers to find them, especially the shops on Vermilion Street.

Norquist was one of the first mayors to promote more two-way streets. He led a campaign to convert several downtown Milwaukee streets back to two-way. He says the increased traffic means that neighborhoods flourish: “I think people started to realize that the city was more important than the road that runs through it.”

In Alexandria, preliminary plans call for the conversion of fourteen streets. This is a version of the plan, as published by the Town Talk. Please note that Martin Luther King, Jr Street (also known as 10th Street) is, for some reason, missing in action. 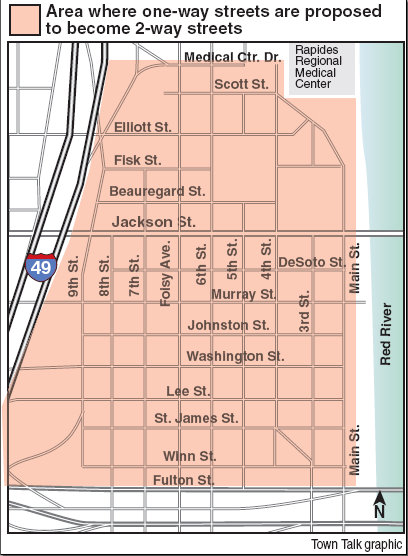 It’s uncertain how this plan will affect downtown parking– already a precious commodity– or the existing businesses downtown, like the House of Java, which rely on streetside parking. But as the article in USA Today points out, this has worked numerous times all across the nation.

According to Mayor Roy, this conversion will only take place once the City determines how to resolve parking. Roy spent  part of the morning surveying aerial photos of downtown Alexandria and believes there may be existing parking lots that are currently underutilized.  Although the initial report called for the conversion of fourteen streets, the number may change. Roy believes that parking should be the primary factor in determining this conversion.