Something remarkable happened on the campus of Louisiana College in the early morning hours of Thursday. A dedicated group of students, working together, peppered the school’s grounds with fliers announcing a protest against their embattled and controversial President, Joe Aguillard, and calling on their peers and classmates to begin boycotting classes next Monday.

Aguillard, arguably, is the most incompetent college president in the country. During his tenure, Louisiana College has been repeatedly on the brink of academic and financial calamity. He has single-handedly driven off more than two-thirds of the faculty. He’s spent enormous amounts of time and resources chasing pipe dreams like a law school, medical school, and film school, while the undergraduate institution he was elected to lead has continued to suffer from neglect and disrepair.

He’s been a provocative and flamboyant sideshow, a man who attempted to demonstrate his spiritual mettle by, bizarrely, eating a live worm in front of a packed audience.

He’s been accused of misappropriating funds, spending more than $2,000 on clothing while on a trip to the African nation of Tanzania.

He’s attempted to conceal and mislead the public on his efforts to convince the governments of Kuwait and Saudi Arabia to redirect the money they pledged in the recovery effort after Hurricane Katrina to a medical school that he wanted to name after President George H.W. Bush, a man he apparently paid $100,000 for a thirty-minute speech during the college’s centennial.

After his former assistant was allegedly caught engaging in sexual activities and drug use with two 18 year old boys, both of whom were LC freshmen at the time, Aguillard didn’t immediately fire the man. For some reason, according to official minutes of the LC Board of Trustees, Aguillard seemed to suggest the college pay the man “blackmail money” to go away. And ultimately, that’s exactly what they did. The employee, according to Aguillard, was forging accreditation documents, and if anyone ever found out, if he ever went public, it could really hurt the college. So instead of firing him, they paid him off.

So, after seeing the fliers on campus on Thursday morning, President Aguillard immediately went into damage control mode, calling for a question and answer session that very afternoon at the Guinn Auditorium. Ostensibly, Aguillard was attempting to be transparent, but as most who have followed his farcical leadership should realize, this was just a sham. He wasn’t trying to be transparent; he was trying to reinforce his authority.

Joe Aguillard, from the very beginning of his tenure, has assumed the persona of a benevolent dictator, though, given his record, it is easy to question the man’s benevolence.

On Thursday afternoon, Aguillard stood on stage for nearly three hours, taking dozens of questions from students. In fairness to him, it was the boldest thing he has ever done in his ten years as LC President. Several students, who were critical of Aguillard, commended him, nonetheless, for his willingness to answer their questions.

But, truth be told, it was also an act of utter desperation.

I’ve got good news, and I’ve got bad news. The bad news first.

I would have been more than willing to post the entire three-hour long video of Joe Aguillard’s question and answer session with students, but, unfortunately, the video was taken down almost as quickly as it was put up. Via WildcatsMedia’s Twitter account: 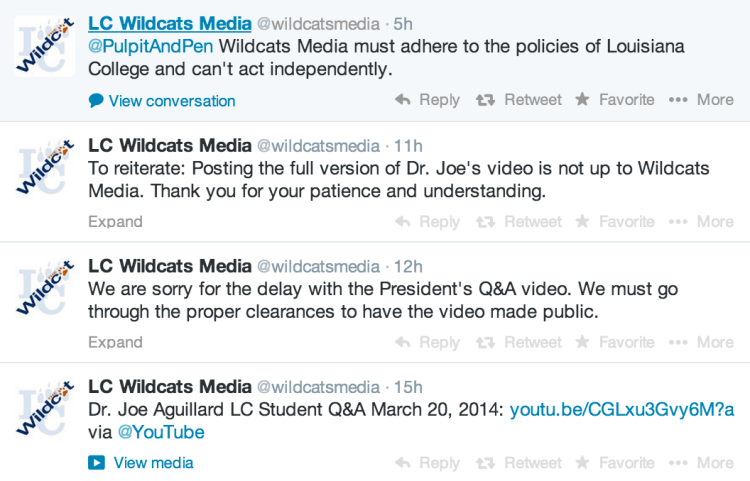 Only minutes after they posted the video, they took it down, and they’ve been scrambling ever since to explain why. I think it should be obvious.

But here’s the good news. As luck would have it, at 9:15AM on Friday morning, I saw their tweet; I clicked on the video, and I watched all of it- not once, but three times. Although I was unable to download the video, I did manage to get a substantial portion of the session on MP3 (apologies, in advance, for the IM pings and any dog barks).

Sorry that it cut off when it did.

During the next two hours, Aguillard was forced to answer dozens of questions about his performance in office, and in the course of doing so, he exposed what is, ultimately, so flawed about his leadership and his understanding of his own job: Joe Aguillard thinks he’s the only adult on campus. He doesn’t respect his students as the independent adults they are, and to be sure, because the majority of the student body isn’t yet old enough to drink, it’s easier for him to treat these students like children.

I was particularly impressed by the questioning from a self-described “non-traditional” student who began by disclosing that her son is approaching the age where he should begin considering his options for college. (Hopefully, the entire video will be available soon, but for now, I’ll paraphrase). It was obvious that Joe Aguillard was uncomfortable with being confronted by an older student, and it was also obvious that this student, though respectful of him, would not be intimidated. She wondered what it would take for him to resign; she told him that he was harming the college’s reputation. After sitting through his hour-long confessional about how, among other things, he found Christ when, as an eight year old, his mother had convinced him that he was going to hell– a story, presumably, that Aguillard shared in order to make him seem preternaturally religious, special, maybe even chosen, but also a story that unwittingly was laden with undertones of emotional abuse, shame, and existential fear caused by a overbearing family– this student was still unimpressed. What it would it take you to resign, she wondered.

Aguillard responded by suggesting that God had hired him at Louisiana College, and the only way he would leave is if God (or the board, of course) told him to.

There are delusional narcissists in every religious tradition, but Aguillard really takes the cake. He openly, matter-of-factly admits to suppressing student speech and retaliating against anyone who criticizes him or his administration, as if squashing the First Amendment rights of American adults is par for the course in academia. He operates under the mistaken assumption that students are paying Louisiana College because Louisiana College has invited them to pay. “Thank you for your thousands of dollars. Now, refer to the student handbook to learn how you’ve just paid us to take away your rights.”

During the afternoon question and answer session, Aguillard implicitly threatened students who disparaged the college on social media; he firmly defended his ridiculous statement about the necessity of employees to be loyal to him, not necessarily competent, and he claimed that he had video surveillance footage of all of the students who passed out fliers supporting a protest.

It’s silly and egomaniacal. To me, there’s nothing particularly endearing or gripping about Aguillard’s version of reality. Among other things, he thought God was blessing Louisiana College because an old man whose wife had Alzheimer’s found $100,000 she’d stashed away only a few days after Aguillard had already committed to paying George H. W. Bush $100,000. That’s right: Thank you, Lord Jesus, for allowing Joe Aguillard the ability to take $100,000 from an old woman in hospice care and give it to the multi-millionaire former President of the United States for a thirty minute speech.

He also seemed to suggest that the Armour law firm was under investigation by the Louisiana Bar Association, which, if untrue (and I don’t know one way or another), would constitute defamation. Thankfully, someone was able to record this video snippet:

I’ll let others parse through the rest of what Aguillard said, at least for now.

But I want to answer a question from a student named Emma who asked what Aguillard’s salary was. He was offended by the question. He called it rude. The truth is: It’s public record. Aguillard makes, at least (as of LC’s most recent 990 reports), $216,000 a year.

In his decade as President, his salary has almost doubled, which is about the only thing at LC that has grown under his watch.