Louisiana Governor Bobby Jindal made a splash in the national news today after telling the right-leaning Politico that Republicans need to “stop being the stupid party.”  For some, Jindal’s blunt assessment seemed like a breath of fresh air, an acknowledgment that the Republican Party has, in fact, been plagued by a virulent strain of anti-intellectualism and that, if it is to succeed, it must champion diversity and nuance. An honest recognition of the ways in which the Republican Party has mistakenly built its identity around protecting Wall Street at the expense of Main Street. Quoting (bold mine):

“We’ve got to make sure that we are not the party of big business, big banks, big Wall Street bailouts, big corporate loopholes, big anything,” Jindal told POLITICO in a 45-minute telephone interview. “We cannot be, we must not be, the party that simply protects the rich so they get to keep their toys.”

It sounds great, and for the Republicans who understand the need to rethink and rebrand their strategies in the wake of the shellacking they took on November 6th, in which Obama was re-elected and the Democrats maintained control of the Senate, despite the hundreds of millions of dollars invested by Republican donors and SuperPACs, Jindal’s comments may be just they wanted to hear. The only silver lining for Republicans: They maintained control of the House, something that no one other than Nancy Pelosi had doubted they would do (and I imagine that even she would admit to election-year puffery). But their victories in the House- something that Paul Ryan references as evidence of President Obama’s failure to earn a mandate– weren’t resounding; Congressional Democrats actually won the popular vote. Republicans were able to maintain control of the House, it seems, due, in large part, to redistricting and gerrymandering after the 2010 Census.

Jindal, as the incoming head of the Republican Governors Association, is savvy enough to know that the GOP must be rebranded if it can ever again become nationally competitive. And perhaps even more impressively, his analysis runs counter to other leaders in the right, like those employed by Fox News who have suggested, for over a week now, that Obama only won because he received the votes of people who depend on “free stuff” from the government. Jindal, to his credit, seems to be arguing the opposite: Republicans lost because they ran as a party who “protects the rich so they can keep their free stuff” and who insults “the intelligence of the voters” by promoting “stupid” candidates who say “stupid” things.

I couldn’t agree with him more.

But here’s the problem: During his five years as Governor of Louisiana, Bobby Jindal has supported and embraced some of the dumbest policies in the country. He may be an Ivy League graduate and a Rhodes Scholar, but as his track record in Louisiana shows, Governor Jindal has enabled GOP stupidity just as much as any other Republican leader.

He promoted and then signed into law a bill that allows public schools the ability to teach biblical creationism as a scientific theory in the science classroom. When a couple of loony legislators announced their intention to introduce a “birther bill,” requiring all Presidential candidates to provide a copy of their birth certificate before they could qualify to run in Louisiana, Jindal made it known that he’d be happy to sign it. The bill, of course, was nothing more than a meaningless PR stunt by a small contingency of paranoiac and bigoted opponents of President Obama, the first and only President in United States history who has ever published his long-form birth certificate. (Ironically, his opponent in 2008, Senator John McCain, was actually born on a US-controlled air force base in a foreign country, Panama, and unlike President Obama, Senator McCain does not have an original long-form birth certificate).

When Jindal told Politico, “It is no secret we had a number of Republicans damage our brand this year with offensive, bizarre comments — enough of that,” I assume he is referring to the comments made about abortion by Senate candidates Richard Mourdock and Todd Akin. But the truth is: Jindal, despite the fact that he hasn’t yet put his foot in his mouth about abortion, believes in many of the same “offensive, bizarre” things he now seeks to ridicule. Jindal also rejects abortion in all situations, including rape and incest; but since he is a “compassionate conservative,” he doesn’t “condemn” women who are forced to have an abortion in order to save their own lives.

I understand why national Republicans are enamored by Jindal: He’s young; he’s a minority; he’s the son of immigrants; he’s a political prodigy with a stellar academic pedigree.

But however sensible his remarks to Politico may seem to a national audience, those of us from Louisiana who have followed Jindal’s career and his decisions as Governor can tell you, he’s with stupid. 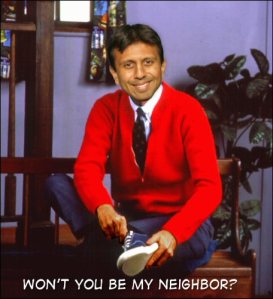 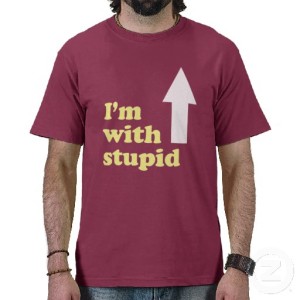