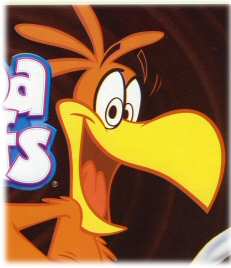 Rapides Parish Police Juror Steve Coco isn’t happy with me. Today, he “challenged” me to produce documentation about his employment with Cenla Broadcasting, the parent company of KSYL. You see, he is angry that I described his position at the radio station as “unpaid.”

I’m always up for a good “challenge.”

From his blog, Cenla News:

One of the major planks of my campaign for mayor will be reducing the ludicrous number of mayoral assistants allowed by the City Charter, ELEVEN! One of the current assistants drawing a handsome stipend from YOUR tax dollars continues propagating lies about my previous employment at KSYL Radio.

This is a lie. This blog is not supported by taxpayer dollars. I operate it on my own time from my own computer. So regardless of whether or not Mr. Coco believes I am “propagating lies,” I am not drawing a “stipend” to operate a blog. By the same logic, considering he receives an income from the Police Jury, I suppose I could accuse Mr. Coco of using taxpayer dollars to operate his website, but that would be ridiculous, right?

Lamar White Jr. continues spewing untruths about me without evidence, facts, attribution or knowledge of events. If the uno termino mayor has ANY intention of reducing expenses, mayoral assistants should be the FIRST to go, including Lamar White and Ken Juneau. They serve no useful purpose to the PUBLIC, but eternal adoration of their benefactor is guaranteed, at least until there’s a new mayor.

Let me save you some time, Mr. Coco. You don’t have to run on a platform of firing me. It’s a moot point. I’d never work for you. But if you insist on running on a platform of firing mayoral assistants who would never work for you anyway, perhaps you should do a little homework on the actual number of mayoral assistants and whether or not your platform is significantly undermined by the fact that you are disingenuously counting all unclassified division heads as “mayoral assistants”: Public Works, Finance, Community Services, Utilities, Planning and Engineering, etc. 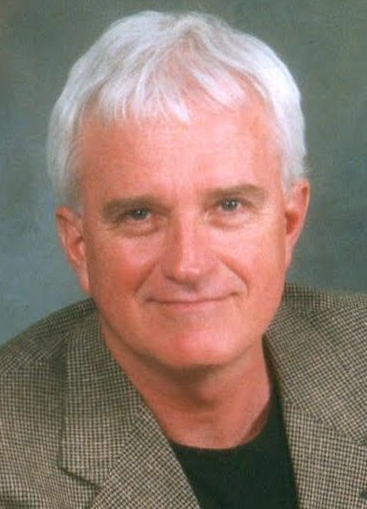 There’s another glaring problem with your platform: In order to eliminate those positions, which, as you point out, are prescribed by the City Charter, you would have to rewrite the City Charter. When you open up the City Charter to revisions, you can’t just pick and choose which portions should be under review; the entire Charter would be subject to change.

White writes in his delicado, retrasado blog that Tee Boy Roy had nothing to do with my firing from KSYL, because that’s the diminuto mayor’s psicotica tale of events. White has no other option but to spread the propaganda, that’s his job.

You insult people in Spanglish? Impressive.

White also continues to perpetuate the widely broadcast misinformation that I was unpaid while working at KSYL. That is a bald face lie and I challenge White or anyone else to show proof. There is legal documentation and witnesses of my compensation. But proof and facts aren’t known by unprofessional writers when they’re blinded by loyalty to their benefactor who funds their endeavors from City coffers. But Steve Coco is a threat and must be attacked, even at taxpayer expense. Just continue collecting your tax/money salary while authoring falsehoods about citizens who challenge maniaca policies. All mayoral assistants should be looking for another “gravy train” to ride when the election is over.

Mr. Coco, if you were paid as an employee by Cenla Broadcasting, then I look forward to reading about it in your financial disclosure documentation. Remember, it’s due on May 15th!

As you know, according to your 2008 disclosure forms, which is the only documentation you have provided thus far, Cenla Broadcasting was not listed as a source of your income. You worked for Christus, Thompson Home Health, Real BBQ by Steve Coco, Sabine State Bank, and, of course, the Rapides Parish Police Jury. (I suppose your gig with the radio station didn’t begin until 2009, right?). If the link to Coco’s disclosure reports doesn’t work on your browser, click “Disclosure” and then search reports for Coco; Mr. Coco is listed as Samuel Stephen Coco. 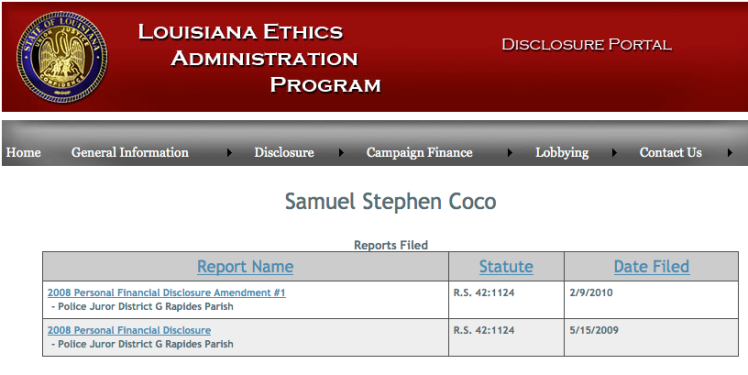 I am most interested in definitively finding out whether or not you received a salary for hosting a talk radio show in which you expressed your own personal political opinions on a daily basis. I am unaware of any other elected official being paid by a media outlet to host a morning talk radio show that provides them with an unfettered venue in which to advance their own political agenda. Typically, elected officials have to pay for their own air time, or they’re invited guests.  (Honestly, Mr. Coco, I was giving you the benefit of the doubt on this).

I have to wonder what the good people at the FCC and the Louisiana State Ethics Board would think about this.

1. Will you list your salary from Cenla Broadcasting as a source of income?

2. Or will you list it as an “in-kind” contribution?

3. Do you intend on making any mention of this compensation on your campaign finance reports?

4. If you received radio ads for your website, for example, would you consider this a campaign contribution?

5. Did you receive a salary or were you paid “in-kind”?

To be honest, one of the main reasons I referred to your position as “unpaid” is because your friend Greg Aymond posted:

It is my understanding that Steve was remunerated for his service by a payment in kind. That is enough for his getting fired.

Either way, he was told not to come back.

I suppose, technically, an in-kind payment is a payment for services, though, according to your friend, you were not being paid a salary. That’s the distinction I was attempting to make, and if it is incorrect and you did receive a salary as a talk radio host, I will gladly retract my previous statements and make it abundantly clear to my readership here that an elected member of the Police Jury received a salary to host a talk radio show. That is a much more interesting story.

On a related note, if you were, in fact, compensated by in-kind payments, as Mr. Aymond claimed, then what were those “in-kind” payments?

Were they commercials for your blog site? What about your barbecue business?

Will we all have to wait until May 15th or will you go ahead and make these disclosures now?